Life Lessons: Tards are people too 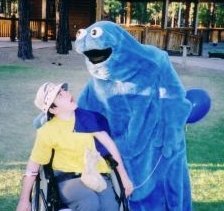 Greetings once again my fine Internet folk and welcome back to another edition of Life Lessons with your host, Roger Mudd. Unfortunately, Roger passed away last week in a drug induced orgy of sex and violence, so I will be taking over until we can find that guy that hosts "Greatest Blunders in History". Thanks to the massive positive feedback about the last Life Lessons, "The Needy and the Greedy", and support from world bank protest groups and CLUMB (Communist League for Undersized Men and Boy), we will be continuing these series of important lessons until our funding runs dry, or it is deemed unfunny by comedy underboss Josh "Cornhusker" Boruff. But do not worry friends - with a couple dozen compromising pictures of him performing unspeakable acts of depravity with random denizens of Dragoncon in my possession, I don't see that happening anytime soon.

Our Life Lesson this week is about the problems we have with intolerance in this country. No I'm not talking about lactose intolerance, or even racial intolerance. What I'm talking about is the hatred and bigotry aimed at our brethren with a lower intelligence level than us. Of course I'm speaking about the mentally challenged. These poor souls are constantly the object of mockery in our society, and have been abused for too long now. Degraded, taunted, and dressed in horribly designed clothes, the legacy of brutally towards these goofy humans is a long and sordid tale. What kind of a country is this where an evil clown overlord can imprison helpless retards in his plastic fortifications, forcing them to deep fry various fatty meats for angry consumers? These exploitations and mistreatments against the mentally challenged cannot continue if America wants to remain a great empire, eventually overwhelming and destroying her enemies to become the single power to rule the world in a suffocating shroud of freedom. We must learn from our past mistakes and stop the hate, or face the dire consequences.

Now before you go ahead and call me a hypocrite for scolding all of you for making fun of the handicapped, I will own up to the fact that I have been less than polite to them in my younger and less wise days. In middle school, I thought it was a good idea to intentionally bomb my English placement test on purpose, thus putting me in the easiest class possible. Unfortunately, this clever plan backfired and I was placed in a class full of retarded people. Since I finished my ridiculously easy homework during the first 5 minutes of class, I was bored out of my skull, and ended up tormenting the poor retards endlessly with pranks and mischief. I would hide their school material, sit in their seats whenever they got up, throw paper balls at their oversized heads, and even plot large and detailed schemes to cause dissention in their ranks, resulting in an epic battle of large flailing arms while I would hide and watch the carnage transpire. I already know that I am going to roast in Hell for all eternity for my crimes, but it's still not too late for you. There is still hope if we can get the word out there that tards need more lovin'. To put this into perspective, let's take a glance into the history of this country's mistreatment of the mentally challenged. 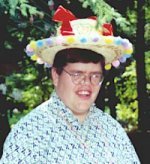 Sure he looks happy, but he's really plotting to kill the person that put that stupid hat on his head.

The first retarded person was invented by Edward J. Downs in 1832. Legend has it that Downs was trying to create a race of superhumans to conquer the world, but something went terribly wrong when his bottle of Yoo Hoo was knocked over by his clumsy assistant Igor, pouring the contents into the subject's brain cavity. The result was a human of greatly reduced intelligence and cognitive responses than an average person, with the tendency to scream in joy when their favorite cartoons come on. Downs tried to destroy his creation, but with its superhuman strength, it broke free to roam the countryside, eventually befriending a kindly old blind man. Many years later, the "monster" hunted down Dr. Downs and slew him with his huge ham fists. The author Mary Shelly caught wind of this event, writing an extremely successfull novel about it.

Unfortunately, Downs took with him three very important rules to follow about these queer folk.
#1: Avoid direct sunlight.
#2 Don't get them wet.
#3: Never, ever feed them after midnight.
Needless to say, these rules were not followed, and they were multiplying rapidly. By 1880, no less than 10,000 retarded folk wandered America, some just passing the days finger painting, others settling down in the south to raise families, becoming the predecessors of most Southerners today. This time of relative happiness was short lived once President Grover Cleveland came into office. A brutal beast of a man, Cleveland rounded up the innocent retards, setting them to work in the nations coal mines, harnessing them to wagons to pull the wealthy around town, and declaring that they all must wear silly hats as identification. 100 years later, his great grandson was carrying on the tradition of brutality by setting them to work in his fast food kitchens across the globe. That man is none other than Ronald McDonald, a cruel taskmaster clown that enslaves the naive folk by luring them with brightly colored happy meal toys. Once ensnared in his net, they are set to work in his foul kitchens for the rest of their natural lives. Sure they look happy when you tell them you want a hamburger, but little do we know that Ronald's clown SS are hiding in the shadows armed with a blowgun with poison tipped darts, ready to dispatch any retard that cries for help or makes a mad dash for freedom. History books leave out many of our darker patches of history, but now that we have the Internet, the real story can be told for the first time. The truth is out there. 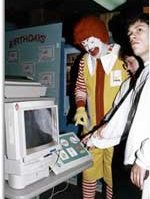 Push the right button, get a pat on the head, push the wrong one, six weeks in the hole.

To supplement this Life Lesson about the tolerance and understanding of retarded people, I went out on the streets and asked regular people their thoughts about retarded people. I think you will be surprised that most of them were grossly misinformed.

They are dangerous and will eat my children.
FALSE: Retarded people are the most gentle people on the planet. Except if you throw a paper ball at their head for an hour. Then they tend to bellow in a fit of blind range and toss you out the classroom window, resulting in a detention for you, and the retard getting put down.

Retarded people must be aliens because they look weird.
FALSE: They are from the planet Earth, and are human just like you and me. People tend to be scared of things they don't understand, like evolution, or the plot to Donnie Darko.

Retards must be happy all the time because they're so dumb.
FALSE: Retards are happy because they know the day is soon nigh when their ranks will rise up in rebellion, slaying their clown masters, and taking power for themselves. The golden arches will run red with blood.

They sure are goofy.
TRUE: They are goofy indeed, yet in this age of war and cynicism, a retarded smile is more precious than the golden rays of a sunrise. They hold the key to happiness in their blissful ignorance.