Living with the Skeletons

I never thought it would happen. Me, living with skeletons. Though I guess a guy doesn't have anywhere else to turn when his girlfriend kicks him out and rent is so cheap on the skeleton side of town. Yeah, so I wasn't exactly that comfortable with the skeletons when they started mingling amongst us -- I'll give you that. No one really was. But after they opened up a few businesses and started wearing clothes, we were fine with letting them teach our children, put out our fires, and apply various toppings to our soft-serve ice cream. Sure, they often gave infants months of night terrors by merely existing, but this is the price we must pay to live in a society with full skeleton integration. Even I remember those skeleton civil rights riots from way back -- that fire hose water just went right through them.

So when I showed up at the skeletons' house, I didn't know what to expect -- but the skeletons seemed to think I did. They had put up fake cobwebs and a cardboard Frankenstein that looked like it came from a grade school bulletin board. I met the skeletons -- Frank and Sue -- but before I could check out the room I was renting, they put on a Halloween sound effects tape, blindfolded me, and made me stick my hands into a bunch of food bowls. I wanted to say, "Listen. I'm going to be living with two fleshless corpses, so this cold spaghetti might not give me the willies," but you kind of have to walk on eggshells when you're dealing with skeletons. They like to put on their corny little show, and we pretend to be spooked. It's all part of the unspoken social contract, just like how we don't let them vote. 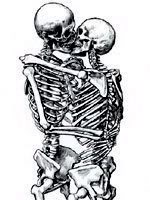 Frank showed me to my room, and handed me a can of peanut brittle in what he called "a skeleton tradition." Having just spent ten minutes fingering peeled grapes, I was growing a little impatient, but I felt kind of sorry for the guy so I pretended to be horrified by the sight of paper snakes ejecting nearly two feet across the room. Frank sighed, said he had a good feeling about me, and soon retired to his skeleton living room with the latest edition of Scary Monsters Magazine. He lent me some back issues, but there's only so much you can read about The Wolfman before you start to wonder if they're just making it all up.

I awoke that night to what sounded like two xylophones falling down the stairs of a train accident. In case you were wondering, yes, skeletons have sex; and it is loud. I stayed up to listen, not out of voyeurism, but an authentic scientific curiosity. How did they do it? When did they know they were finished? And why was there so much shouting and lamp-breaking at the end? Later, when I ran into Sue in the hallway, she asked me if she looked pretty. This was then followed by a solid week of casual back rubs, "accidentally" walking in on me while I showered, and curious glances in the kitchen. At least I think that's what they were; I can really never tell what the hell those skeletons are looking at.

For 200 bucks a month in rent, I tolerated Sue's advances; she was harmless, and I wasn't about to come down with "Marrow Fever." But after a few weeks, Frank became suspicious. Sex grew less frequent, and they would often blast Monster Mash on a loop in a futile attempt to drown out the sound of their constant fighting. After returning home from a late night of building model airplanes with friends, I walked in to see Frank -- a half-empty bottle of whisky by his side -- framed by the moonlight and absent-mindedly toying with a revolver. Of course, the whisky was only for show -- half of the bottle was being absorbed by the seat cushion of an easy chair -- but, to date, that encounter marks the only time a skeleton actually scared me.

A few weeks later, I said my goodbyes. By that point, Frank and I weren't on speaking terms, and Sue -- well, let's just say when you wake up to a skeleton playing with your hair, you really start to rethink the benefits of cheap rent. At the risk of being branded a skeleton home-wrecker, I loaded up the car and hit the road -- Sue tried to see me off, but I pretended to be too distracted by talk radio to see her roll off my windshield and collide with a bike rack. As for me, now that I'm a little more-open minded, I've got an appointment to see a mummy about renting a sharing a split-level condo for $500 a month. For what is a mummy but a skeleton with some much-needed decency?