SHAGGY BUTTE - Meaghan Chwisptle, a 24-year-old junior at Shaggy Butte Community College, was a girl with big dreams. "She wanted to be a college student," said her father, Randall Chwisptle. "She was going to graduate, then apply again after SBCC's accreditation went through, then graduate again." 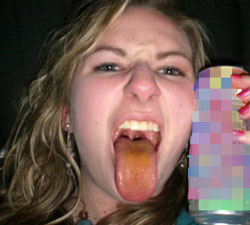 Due to the highly subjective nature of the claims made within this article, the KRUT-5 legal team has asked us to obscure this photograph.But that dream was cut tragically short. On Saturday night, just one night after the night after Thanksgiving, Meaghan became the latest victim of a silent new killer: a highly alcoholic, super-caffeinated "energy booze" drink called BYITCH JUICZE. She had gone out to party with friends, consumed two 24-ounce cans of BYITCH JUICZE, and come home late. She collapsed on her bed; her father wouldn't see his daughter alive again.

Until the next morning. "She woke up and said she felt weird," Randall told us. "Something was obviously wrong."

Just hours later, Meaghan had gone back to bed. It was then that her college dream came screeching to a halt. When her father came into her room to check on her, Meaghan was motionless. Thinking she was still asleep, he attempted to revive her.

"She woke up pretty much right away," said Randall, "and she told me she was thinking of not going to SBCC anymore."

For this 24-year-old, college life was at a sudden, violent end. "I think that drink, that BYITCH JUICZE, really did a number on her."

Experts warn that BYITCH JUICZE and drinks like BYITCH JUICZE could cause serious harm if abused. "It's like basically drinking a huge cup of coffee and a couple of beers at the same time," warns Dr. Rick Lamby of Shaggy Butte Family Practice, "because, essentially, that's basically what it is."

Other, similar drinks-- like 2Wacky, HOZE and Crump Oil-- may contain even more ingredients.

"Because you're getting hopped up on caffeine at the same time you're getting drunk, the BYITCH JUICZE can mask the effects of drunkenness, leading to some pretty bad things," said Lamby. "You can get drunk without even knowing you're drunk, because you can't tell how intoxicated the BYITCH JUICZE is making you." This might lead to overdrinking, vomiting and even death.

But just how deadly is BYITCH JUICZE? The product's maker, Arkansas Bottled Novelties, denies that their product is any more dangerous than already-established mixed drinks like Irish coffees or beer-and-cokes. "We strongly deny that our product is harmful, and there are no reported deaths associated with drinking BYITCH JUICZE."

Or are there? Experts, like Dr. Lamby, aren't so sure. "I heard a girl died in Emmetsburg or something. Was that from BYITCH JUICZE, or was it the thing where you put a margarita slush tampon in your butt?"

Law Enforcement: "Our Hands are Tied"

While police chief F. Juan Towerscrist is well aware of the BYITCH JUICZE problem on local campuses and elsewhere, there's little he can do about it. "If people of legal age want to drink a legal product, I can't stop them. I only hope they're not getting behind the wheel of a car all hopped up on Crump Oil, because that's a very dangerous situation and somebody should do something about that."

"Our hands are tied," Towerscrist added. "We just have to wait for the stores to run out of it, because the FDA has essentially banned it already."

But did the FDA really "ban" these drinks, or just put a temporary roadblock between BYTICH JUICZE and youth death?

"They aren't really banned, but they may as well be," Shaggy Butte DA Prince Rogers Nelson told KRUT-5. "They'll be off the shelves by mid-December, so I'm not sure we really have to worry that much about it, unless kids stock up and drink a whole bunch of it all at once."

And that's just what they're doing, according to convenience store owner Michael Broothe. "We're all sold out. A bunch of college kids came and bought it all because it's illegal now. They're going to have one hell of a party."

Some say the sudden banning of BYITCH JUICZE raises a disturbing question: has the FDA, by announcing that it's about to pull BYITCH JUICZE off the shelves, essentially encouraged binge drinking? District Attourney Prince Rogers Nelson thinks so.

"I don't think it's fair to say the FDA is encouraging binge drinking," Nelson said. "But I can sort of see where you're coming from with that."

With the FDA dragging its heels and law enforcement impotent to combat the BYITCH JUICZE horror, what does the future hold for young women like Meaghan Chwisptle?

"I really don't know," Randall Chwisptle told KRUT-5. "She talked about maybe transferring to the accredited junior college over in Fort Abelard."