You know, there's been an awful lot of Las Vegas bashing this week on this beloved website, which is normally a bastion of truthful, unbiased journalism on the story sea of malignant, uninformed, and frequently moronic opinions we call the internet. I'm not exactly sure where all this rage came from all of a sudden. I was unfortunately unable to attend Gooncon this year, but it seems like the event was a rousing success. Why, then, is there all of this hostility toward the city that was kind enough to give Gooncon 2004 a place to call home? What did Las Vegas do? I mean sure, Josh "Livestock" Boruff lost all of the money he'd been saving to pay off his student loans and get that liver transplant to the blackjack tables, and okay, Reid "Frolixo" Paskiewicz lost his virginity to a forty dollar hooker named Lazy Eye Rodney, and fine, Zack "Geist Editor" Parsons lost his dignity, as well as his pants in a mudwrestling match versus Roy Horn of Siegfried & Roy on pay-per-view, but think of the stories they'll be able to tell their grandchildren someday! Well, the stories Josh and Zack will be able to tell, at least. I'm pretty sure Reid was rendered impotent by his experience. Or at the very least, it seems rather unlikely that he'll be able to convince any woman to mate with him after seeing the veritable buffet of STDs he picked up from Rodney. Well, with any luck the crabs and the lice will kill each other off, and most fungi can be easily burned to death with a liberal application of everyday household industrial weedkiller. 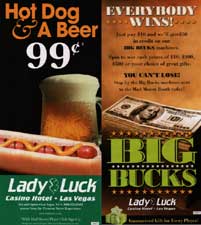 Where else can you find a deal like that? With any luck, in heaven.

So maybe they had some experiences that soured them against the only city in the world to have more neon lights than citizens, but Las Vegas still has a special place in my heart. I remember my visit fondly, if massively incorrectly, since I was around eight years old at the time. I've done a lot of growing up (read: drugs) since then, but my memories of Las Vegas still bring back feelings of the childlike innocence that can only really be gained through ninety-nine cent martinis and legal prostitution. There's a magic to Vegas that no other city can match. It's like Disneyworld for the addiction-prone. You can stroll the streets at any time of night, certain that the glaring casino lights will not only provide proper illumination for you to peruse the nearest stripper billboards as you walk, but will also keep you safe. I'd like to hear them say the same for New York City! Why, I heard someone got robbed there just last year! That's the sort of thing that would never happen in Vegas. Why would anyone need to rob you when everywhere you look there are legally sanctioned facilities where you can hand over your money willingly? Here's a look at just a few of the things that I love about Las Vegas, the City of Lights.

One Theater, One Performer

Where else can you find world class entertainers strutting their stuff onstage seven nights a week, fifty-two weeks a year, for as many years as it takes until they pay off their debt to the mob? Acts pass through other cities in a night or two, but Vegas is where they go to die - fabulously! Award winning performers such as Celine Dion, who moved the nation to tears with her ballads of the tribulations of love, and Danny Gans, who once wrestled a bear just to hear it scream, not only work in Vegas night after night, but they have their own damn theaters just for them! That's right, they'll perform on your schedule because, hell, they have to be there! Sure, these longterm contracts forbidding the artists from performing anywhere else essentially turn them into slaves, but hey, a slave in velour sounds like a happy slave to me! 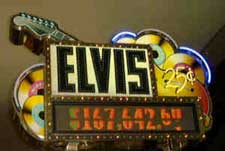 Married in an Hour or Your Pizza's Free

Las Vegas is home to more wedding chapels than any other U.S. city. No wonder it's called the City of Brotherly Love! You can marry your brother! You can marry your nose! You can marry your brother's nose! If you can find it, you can marry it in the environment of your choice. Get hitched in a barn, tie the knot in the jungle, take the plunge from the safety and comfort of your own car - anything is possible! And what could be better than getting married in the place of your dreams? Why, having your favorite people there, of course! You can get married in the presence of, or by your favorite celebrities, impersonated in loving detail by people with no other marketable skills. Where else can you cement the cherished bond between yourself and the person who means the most to you and get served curly fries by Marilyn Monroe at the same building?

Although Sin City is typically thought of as an adult destination, nothing could be further from the truth. What could be a better vacation spot for the kiddies than a city built by gangsters as a haven for gambling, liquor, prostitution, and prizefighting? And Vegas has gone a long way to promote its family-friendly face. I'm sure you all remember a few years back when Las Vegas began advertising the lengths it had gone to in order to provide activities and entertainment for visitors of all ages. Such attractions as a huge rollercoaster and a stunt-filled pirate ship battle on the water combine to give children literally minutes of entertainment that can keep them busy while mommy and daddy squander their college tuition on the slots for eleven hours straight. And now Vegas has launched a new ad campaign promoting the naughtier side of the city with the tagline "What happens here stays here." It's a good things this campaign came along, because like most of you, I was starting to worry that Vegas had become a mecca for toddlers, like Disney presents Times Square (tm). These ads, which were originally slated to have the tagline "Yes, we still have whores," suggest that their new family-friendly attitude has not hampered the city's anything-goes style. Now even Junior can booze it up with strippers at a craps table! Yes, the City by the Sea has something for everybody!

Each year, millions of people flock to Las Vegas in the hopes of striking it rich at a casino. This is because millions of people are idiots. There's so much to do in Vegas that squandering your money at the tables seems like a waste. If you've got the cash, the only limit to what you can do is your imagination! Foxy Boxing? They have it every night just off of the Strip. Midget racing? There are three tracks within two miles of Caesar's Palace. Hunting human beings for sport? You can pick up a three day permit for under a hundred bucks! From thrill rides to fine dining to raucous entertainment to literally hundreds of different kinds of erotic massage, the sky is a limit. What else would you expect from the legendary Lost City of Gold?

Before I draw this message of gratitude toward the city and people of Las Vegas to a close, I'd like to say one more thing. Sure, Vegas may be tacky, tawdry, glitzy, pricey, shallow, obscene, and frequently offensive, but dammit, so is America. That's why we love it. And anyone who thinks that there's something wrong with spending ludicrous amounts of money to go to a city with no morals, no definable culture, no sense of history, and hookers who don't finish the damn job, such as my fellow writers, is a dirty tree hugging hippie, and most likely a communist. Thank you.