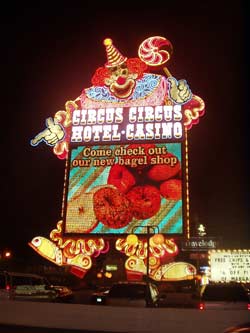 Dear God.Having just returned alive from my first visit to Las Vegas, I feel the need to share some of my experiences, observations, and enlightening commentary even though two other writers have pretty much already covered everything Vegas-related this week. This was my first and hopefully last trip there, so I'm not going to get another chance. The fact is that it's very likely this site will be nothing but an extended attack on Las Vegas for the next week, if not year. The place really is just that bad. Las Vegas is essentially the combined horror of Hell, the Holocaust, and the killing fields of Cambodia ground up and run through a giant neon sausage maker. At one point I crossed paths with a group of Christians holding up signs urging people to turn to Jesus and seek salvation, and it really got me thinking. I'm not a religious man, and can no more differentiate the Bible from a stack of Thor comic books, but the Las Vegas experience was rotten enough for me to put faith in the idea of a higher power willing, ready, and eager to rain down the fires of judgment. Las Vegas is not just an affront to all things holy that I don't really believe in, but an affront to all things sane in general. That said, I want to see the desert swallow Las Vegas whole, burying it and everyone in it in a stomach full of sand.

I imagine that hundreds of years after the desert swallows Las Vegas, futuristic archeologists of a possibly alien nature will uncover the most perplexing ruins imaginable. Pyramids, statues, Roman coliseums, faded billboards advertising a mythical man called Danny Gans, and the frameworks of countless gaudy buildings buried beneath a sea of sand like a giant cultural landmine. All of them tombs to untold millions of skeletons, clutching slot machine levers with literal death grips. I imagine that these archeologists will be so horrified that they will bury everything they find again and then never come back. All throughout my trip I tried to comprehend just how evolution could bring us so far, and yet allow us to build something so monumentally stupid as Las Vegas. Advanced species? Las Vegas? Things just didn't add up.

I didn't mind the oppressive heat or the bright sun, since both are common fixtures of a desert biome, but when you couple those factors with what has to be the ugliest place in the world and fill it full of sweaty zombies, you get problems. Las Vegas was obviously designed by a retarded child and bankrolled by a shadowy cabal of Nazis, mafia gangsters, racist astronauts, pedophiles, murderers, and Celine Dion. I can't imagine any other place in the world that would make heroes out of creepy immigrants like Zigfried and Roy, or glorify washed up actors, comedians, and musicians as Gods of the Universe. I can't say there was a single thing that appealed to me in that rotten cancer growing out what could otherwise be a good stretch of empty desert. Hell, they could tear it all down and erect a factory that does nothing but shoot human babies into walls at high velocities and that would be a big step in the right direction. 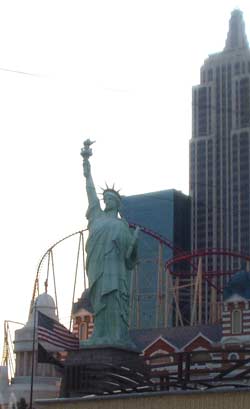 Oh man, it's just like the real New York!Some people might find the idea of traveling to a high-profile vacation spot like Las Vegas to meet Internet people embarrassing, if not entirely stupid. Those people are dead right in every way imaginable. Like the other writers of this site, I went to Vegas simply for Gooncon, the celebration of our half-decade of being really awesome and full of ourselves. I can't say that that's a very good reason to travel to the desert, but I don't suppose there would ever be a good reason. I also don't think there actually is any practical place to assemble 400 people from an Internet forum, so it was a doomed mission from the start. But since I believe in this site and its power to bring people together, I happily jumped aboard an airplane named Ted and flew out with reckless abandon.

What followed was a surreal blur of blurry surreal oddness. Although I have never done drugs in my life, I felt an instant kinship with the worst addicts, because I suddenly understood what it was like. Everywhere I went there were people screaming "Internet" and forming into menacing gangs that fought brutal buffet turf wars. I was scared from the get go, especially when my first encounter with a fellow forum member was being humped while standing in the hotel check-in line. Though his intentions were noble, it was still a startling occurrence and ominous start to the weekend. I believe that handsome devil was demonstrating to me the concept of foreshadowing in the most erotic way possible, something I can't really blame him for since he was a nice guy and entirely polite about it. Thankfully all the later homoerotic activities involved other people, thus leaving me free to maintain a staunch air of supremacy over all the lowly subjects I looked down upon from my lonely corner far away from the rest of humanity. Actually, I managed to mingle, albeit with people who met my rigorous standards, consisting mostly of "being in my immediate area" and "not having a knife or gun in hand." Being a pathetic nerd with the social skills of a chainsaw-wielding psychopath, I think I did a fairly decent job of fitting in and not causing anybody to get scared and run away. 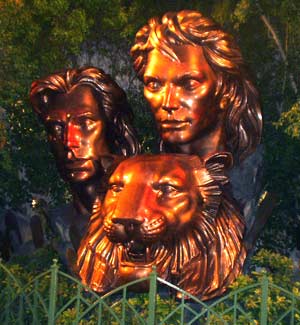 If there was ever a more terrifying sculpture, it was probably of a syphilitic clown's penis.I have to say that I did have a fun time and got to meet a lot of Something Awful Forum members I've known for years online, as well as famous celebrities like Ryan "OMGWTFBBQ" Adams and the mysterious man behind Dr. David Thorpe. There was also famous former SA writer Kevin "Fragmaster" Bowen, who was ridiculously funny and more entertaining than I imagined in all those disturbingly frequent dreams of mine. It was also a chance to mingle with the coworkers I knew from previous encounters. If you think Lowtax is funny online, imagine spending a half hour waiting in line for a "Star Trek" ride with him and imagine there was some alcohol involved as well. I can't say that's an experience I thought I would one day have, but I suppose I'm a stronger man now. Catching up with Zack and his better half, Fistgrrl, as well as tender Reid, was also quite fun. I very much enjoyed the helicopter ride I shared with Reid, who asked me if I wanted to hear an amusing adage about helicopters. When I told him I did, he pulled out a gun and shot the busty pilot in the head, splattering the inside of the front window with a lifetime of thoughts and memories. We giggled all throughout the emergency crash landing that claimed the lives of several tourists, a beautiful collie, and half an Elvis impersonator.

Beyond the elitism, it was an opportunity to meet the real fans of this site: the ones who read our forums and don't know we actually have a front page. I couldn't believe the turnout, because I honestly expected half as many people taking up twice as much space. I was wrong of course. There they were, roughly 400 of them, each a raw and perfect specimen of the human race, gathered to share in the wonderful history and success of Something Awful. In all seriousness, and raillery aside, it was and is inspiring to know that a site like this can be so successful and have such a loyal following. Just about all the people I met were fun and interesting, and I had a great time hanging out and doing things I never do, such as gambling and spending money. I lost over a dollar playing slots and another dollar when I bet that a forum goon was going to lose all his money at blackjack. That rotten jerk doubled his money, teaching me that gambling on gambling was a bad idea.

At one point I met one of our forum moderators, a friendly young man who came all the way from the Netherlands. Upon learning his secret international origin, I immediately felt what might possibly have been my first patriotic instinct. I wanted to protect my country by making him understand that Las Vegas did not represent us, that it was a fluke, and that we hated and despised it. I suddenly realized that if people came to this place from overseas, they would think that we were completely deranged, and not for the usual reasons of doing things unilaterally or being jerks. I don't care if they think we are bullies, but if they were to see Las Vegas, they would suddenly know our dark secret and never look at us the same again.

In the end, the only reason I survived Las Vegas was simply because I was surrounded by a group of people that didn't take the place seriously at all and saw its true face. Without that healthy cynicism, I might have gone insane and shot myself in the head with a syringe full of liquefied bullets. Instead of that, I was able to relax and share many a spirited discussion on the topic of why Las Vegas needed to be destroyed more than anything else. There is definitely something wrong with a city when you look forward to leaving it and returning to Indiana, which, as many of you know, is America's bowel cancer. If Something Awful survives another five years, and I believe that to be possible, I hope we celebrate our anniversary some place nicer, like in an IRC chat room or Compton, California.