This isn't intended to be a review of Mass Effect 3. The game certainly isn't bad on the whole, as the shooting is largely the same as the last installment (if you liked that) and some moments worked really well.

This is about the stupidest bits. Why? I think they're inherently funny, which makes writing jokes about them easy. They also stem from BioWare wrestling control from the player to tell stories that hit every low point on the "broad appeal" checklist, employing cinematic cliches and super gross sexiness. It would be nice if they'd knock that off.

There are spoilers ahead. The biggest, dumbest spoilers.

Near the end of the game, Shepard says farewell to all of his violence buddies. This sequence is sort of bad already, a mechanical procession of people to run up to and press the talk button, followed by three lines of surprisingly trite and disappointing dialog. 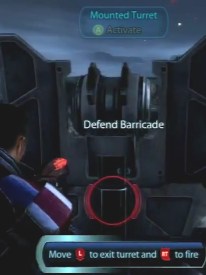 What puts it over the top is that halfway through the handshake assembly line your location comes under attack. The only option is to jump on a turret. A turret, for crying out loud, for the fourth or fifth time in the game. It was fun for exactly none of those times.

After shooting a hundred dudes, control is (naturally) taken away for a moment to show Shepard hopping down, strolling away with a pompous smirk on his face as he heads off to continue his somber goodbyes.

If you play RPGs to take on a character, this makes perfect sense if your role is Inscrutable Turret Man.

There is a reporter lady modeled after (and voiced by) an actual video game journalist. If you let her on your ship for some godawful reason that doesn't really make sense, she sticks around for the entire game. It's important to note that Mass Effect 3 doesn't give you as many squadmates as you might expect. When one of the few people you can speak to on your ship is a reminder of the real world and BioWare's marketing strategy, it's sort of weird. Even weirder are the multiple occasions where Shepard calls the reporter into his private quarters for an interview, then watches her ass as she saunters away. The camera lingers on her exit each time, giving us heaping eyefuls of that sweet polygonal behind. Thanks, I guess!

Another awkward reminder of BioWare's marketing (in addition to the DLC and pre-order weapons) comes in the form of Coats, some guy from the game's first promotional trailer. He shows up at the end of Mass Effect 3 like Poochie The Dog, immediately spouting off his opinion and being treated with respect by everyone. We aren't given any reason to care about this guy at all, but he gets more screen time in the final hours than Wrex.

Coats is a walking font of opinion with no character to back it up, a stranger strolling into your grandmother's funeral and telling you exactly what he thinks of the quality of the headstone engraving. I'm sure that he will be featured in some sort of upcoming DLC or spinoff, so we can finally get to know the compelling story of this fascinating soldier man.

Speaking of bad characters, how about that Kai Leng? Ask a 12 year old to describe a techno space ninja, and the result won't be half as goofy or magically unstoppable as Kai Leng. The man has a future ponytail, glowy visor, a katana, and armor that was scavenged from the set of American Gladiators. 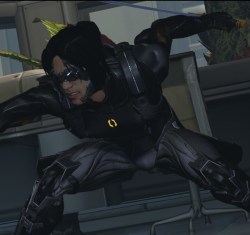 At one point you fight this joke of a person, win, and are treated to a cinematic in which you lose. Why? Because the plot needed it to happen. What about the player's impact on the story? Not as important as making ninja man awesome.

Don't worry, the game also goes out of its way to make Shepard awesome at the expense of the overall tone.

At one point you solo a Reaper, a massive Lovecraftian force which had been established as nearly unstoppable. How? By running back and forth on a 20 yard platform and evading a laser capable of destroying skyscrapers and space ships.

Luckily, the Reaper doesn't think to rush your silly little platform and shoot you at point blank range. Instead, he holds off, only advancing a few steps after each successful attack you make on his weak spot. Boss fights.

Shepard also gets to become a badass in multiple slow motion sequences. You know the parts in Call Of Duty where everything slows down and you have to shoot someone at a dramatic moment? The overdone parts? You get a few of those. There are also a handful of Max Payne sequences where you run in slow motion through a nightmare with a child, spooky lighting, and whispers.

Unfortunately, the game does not enter slow motion mode when Shepard actually snarls "I'll sleep when I'm dead" (this really happens, holy shit) or on the multiple occasions where you are prompted with a QTE to shake someone's hand.

Then, of course, there is the ending. It's not just that the conclusion to the series is disappointing, it's that there is absolutely no consideration for the player's choices up until that point. The character that you built across three games is swept aside. You can press one of three buttons, all of which make Shepard submit to a magical hologram child and a bunch of last-minute mysticism that Stephen King would dismiss as being too silly.

Commander Shepard. The soldier who came back from the dead. The man that did everything in his power to stop the Reapers. The guy that solved all the galaxy's problems by punching or not punching people. Told by a child to give up and push a button for reasons that didn't make any sense, so he gave up and pushed a button because there was dramatic music and slow motion. What would Coats say to that?