How to Train Your Dragon; Hot Tub Time Machine

Having learned How to Train Your Dragon, Joseph "Jay Dub" Wade is now ready to share his knowledge with you. In another place and time, Robert "Macrame_God" Seeders gets cozy with ejaculate in a Hot Tub Time Machine.

How to Make People Forget About Shrek

EXPECTATIONS: In the past couple years, Dreamworks Animation has managed the Herculean task of climbing out of the creative chasm it dug itself during the mid-2000s with unfunny junk like Shark Tale and Madagascar. Now, with the help of Lilo & Stitch directors Chris Sanders and Dean DeBlois, Dreamworks hopes to teach youngsters a thing or two about training a dragon of their very own. Hey, at least it's not going to be "Mugging for the Camera: The Movie." Right?

Goddammit!REALITY: While How to Train Your Dragon falls a couple notches beneath Kung Fu Panda on my patented "Holy Shit, This is Awesome for a Kids' Movie!" scale, it's considerably better than last year's boring-as-shit Monsters vs. Aliens. The animation style and character designs look fantastic; the flight sequences in particular are breathtaking. I can't say as to the quality of the 3D, though, because I'm a cheap bastard who hates 3D on principle. So there.

The plot is your typical "parents just don't understand" story, only this time instead of Fresh Princes, there are dragons. Way up north where the map reads "hic sunt dracones" sits Viking Island, which is under constant threat of annihilation by the many native species of dragons. The smallest, most useless of all the vikings is Hiccup (Jay Baruchel), whose father just happens to be the mayor of Viking Island, Beardface McBroadShoulders (Gerard Butler). One night, Hiccup accidentally shoots down a Night Fury, the stealth bomber of dragons. When he goes to collect his prize, he instead finds out how to tame dragons, and subsequently how to saddle and ride one into the stratosphere. Naturally, Beardface discovers this and plans to use his son's knowledge in his quest to DESTROY ALL DRAGONS.

Like most Dreamworks animated films, Dragons mashes up a number of stock stories and movie scenes, but for adults and nerdy types, the real fun is in the telling. There's the 'learning to fly' scene, which feels oddly reminiscent of Iron Man. The dragon school scenes feel ripped straight out of Harry Potter, and we get a couple scenes about how badass Vikings are, clearly capitalizing on 300, the last time Gerard Butler entertained anyone. I bring up all these references because, much to my delight, the movie doesn't. Similar story elements pop up all over the place, but the movie is refreshingly free of the sort of pop culture references that tend to ruin this kind of movie. 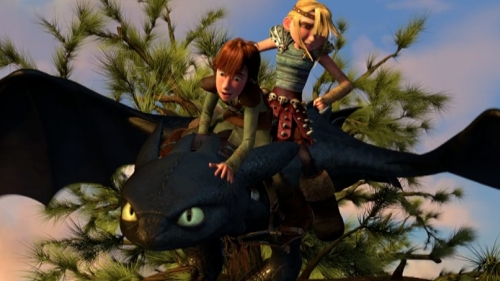 Again, it's more Kung Fu Panda and less Monsters vs. Aliens. There are some laughs to be had along the way, sure, but Dragons is an adventure film first and a comedy second (and a how-to guide third). Aside from Hiccup's dragon doing its best Stitch impersonation and a joke about how big Hiccup's dead mother's boobs used to be, the movie is surprisingly sparse on the laughs. The ads for the film have been marketing the fuck out of Jay Baruchel's garbled, unfunny one-liners, so I'm sure it'll come as a surprise to many viewers when they find that the movie is actually quite the thrilling little action story. The climactic battle between the Vikings and the biggest fuck-off dragon I've ever seen is brief and fairly predictable, but if you can't figure out how that ends, then you need to see more movies, my friend.

Which finally brings me to the title of the film. It's called How to Train Your Dragon, emphasis on the "How To" part. Based solely on my analysis of the film, I've managed to pare the film's instructions on the matter down to ten brief lessons. (I can't verify the authority with which Dreamworks presents these lessons, so your mileage may vary.*)

* Neither Something Awful LLC nor myself assume responsibility for any and all injuries or deaths sustained from following these guidelines.

MINORITY REPORT: I want to take a seven-foot-long kebab skewer and impale Gerard Butler, up the arse and out the mouth, to coin a phrase. I will then slowly roast him alive over dragon's breath and feed him to a family of badgers. That's a win-win situation right there, badgers get fed, I get rid of Gerard Butler. -Ian "ProfessorClumsy" Maddison