Animal Dildos, submitted by Ken. Due in no small part to a horrifying MTV special on furries that I recently made the point of not watching, furry fever has been blanketing the countryside. Previously closeted furries (people who dress up in team mascot costumes and awkwardly hump each other) and plushies (people who stick their dick in stuffed animals) are bursting forth from the cellars to prance down the already choked highways and byways of deviant sexuality. That makes a site like this all the more popular, because it caters to those in the furry community who just aren't content with spilling their genetic code into the backside of a carpet sample. They want to shove fake animal parts into themselves! 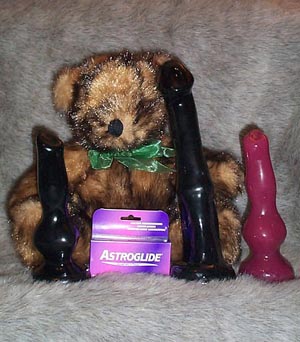 Here we have a toy modeled after a Black Bear and a Spectacled Bear. The toy itself is pretty decent sized and is quite fun to use. It is the closest to a natural Bear penis that has ever been produced. The dimensions are 2 1/2" oval across, 1 1/2" taper behind the head to 2 1/4" near the base 9 1/2" overall length.

That's just super! Honestly I can understand their need to be accepted in mainstream society - no matter how unlikely that is - much better than I can comprehend their fetish or what the FUCK might compel you to jam a simulated bear dick up your ass. But that just gets me started down other roads and other questions that I don't want to think about, like how they even got a REALISTIC OMG BEST EVER bear dildo. Another big question would be; is there some operation I can have that will make me forget the last two years of my life and also make the Internet stop existing?