Of Mayonnaise And Modern Rebellion

No generation before ours had a clue.

They lived in black and white. Thought in two dimensions. We think in three dimensions, and do said thinking outside the box, in full color HD.

We refuse to bow down to traditional logic. We don't wipe from front to back, or from back to front. We wipe from side to side.

We are Charmin, and we despise everything our forebearers stand for.

The wars that have been waged are wack. We won't fall in line. Won't say "Yes, sir" and "Right away, sir".

We are John Deere, and we are turning the steering wheel in directions you've never even thought were possible.

Your narrow mind cannot comprehend how we post things on the internet that are actually the opposite of what we mean. We fake post to elude the mainstream's grasp of who we are, and what we are capable of.

The entirety of our sense of humor can be summed up as "If you can imagine a '...NOT!' at the end, we think it's hilarious". We refuse to accept your rules. We won't let you brainwash us into thinking that irony and a mean attitude aren't funny without the addition of an actual joke. You'll never convince us that our way of posting was old five years ago.

We are half of the Something Awful forums, and we will not be ignored. 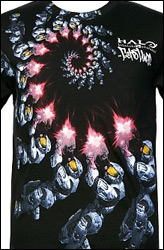 We know that if you're over the age of 30, you are actively trying to keep us down. It consumes you, as we are obviously the center of the universe.

Why are you so frightened of our Master Chiefs, and how they break all the rules by not sitting in the center of our shirts, but in swirling antiestabishmentary patterns?

We are Ecko Unlimited, and every time you knock us down we are getting up to buy more jean shorts and spraypaint derivative shit on things we don't own for attention.

Don't strain yourslef trying to look like all the others.

Don't allow yourself to be pinned between those that came before you and all those that will come after, the pressure choking the life out of you.

In other words, don't be such a copy.

We are Xerox, and we refuse your notions of what casual dress Fridays can be.