For those of you who are unfamiliar with my work, I am the world's leading reporter on technology. I'd like to thank Something Awful for the opportunity to bring my extensive knowledge, experience, and contacts in the tech industry to this esteemed website. As always, keep in mind that I had all this information first. It was me. I was the first.

My sources have confirmed that the iPhone 5 is on the way, and that it will have a little face with pudgy cheeks that you can pinch. Everyone's favorite device is now cuter, and it has a tiny button nose that wiggles. Future revisions may include big blue eyes that sparkle and wink.

Now there's even more reason to stare at your god damn phone while in the presence of other people, because the iPhone 5 is going to be so adorable. When you touch the screen it makes a giggle.

I have obtained an internal email from the top levels of Microsoft which reveal Windows 8 as more of a departure than we had been led to believe. The letter states that Windows 8 will be "easily the most Ballmer-centric operating system we have ever released". 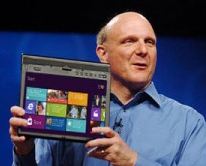 "It's all in there," the email goes on. "The sweat. The desperation masquerading as enthusiasm. The yelling. This will mark the highest point in our company's history and will revolutionize the personal computing experience."

Microsoft is so confident in the Windows 8 experience that they will launch an all out media blitz to rival their celebrity-filled Windows 95 "Start Me Up" campaign. Branded "Ballmer To The Max", this strategy will involve fifteen different black and white commercials in which A list actors and musicians candidly speak about their personal Ballmer experiences.

Inside information at my disposal informs me that Amazon's upcoming tablet has been finalized and that an announcement is due within the next two weeks, but the file with all of the information has been accidentally deleted by a baby, leaving the company with nothing to show for all of its hard work.

Amazon plans to go ahead with the new conference anyway, confident that they can bullshit their way through most of the event with vague promises and a Photoshopped image of the Kindle overlaid with an iPad screenshot. Thankfully, the company's top men are reasonably sure that they remember the name they had agreed upon for the tablet, and that it was probably the "Kindlepad" or the "Touchazon".

Unfortunately, the baby that deleted the file also threw a party in Amazon headquarters, and Jeff Bezos is due back from a business trip in three hours. The company is very pessimistic about its ability to clean all the pizza boxes, fallen lamps, and potato chips before Bezos arrives.

A New Direction For HP

After throwing in the towel on the Touchpad mere weeks after launching the tablet and announcing that it is exiting the consumer computer market, HP seemed to be a company without a plan.

Now my sources reveal that the company will hold an event to detail its new strategy: Covering all their windows and hiding under their desks.

Analysts speculate that with no products to manufacture and a lowered overhead cost, HP could very well coast for another thirty years with the money currently available. I would highly recommend buying stock in this company while the price is down and everyone is overlooking their staying power.

Facebook is an e-sensation that has changed the way we communicate as much as Twitter, smart phones, Blackberries, iPhones, Wii, and the cloud. We literally cannot remember what life was like before these vital services came along. Don't believe me? Look at some of your pre-Facebook pictures and you'll find that they have faded to nothingness like that photograph in Back To The Future.

Now Facebook is evolving to stave off fierce competition from Google Plus, and my sources have laid out all the details.

Perhaps the biggest new feature is full MySpace integration. Users will be able to click a button and make Facebook look exactly like MySpace's website. Clicking another button will parse all words on the website and change them to "MySpace". Clicking on a button buried deeply in a preference menu will bring you to MySpace.com.

That's it. That's the extent of the changes.