Dave: Our boss, Rich "Lowtax" Boruff, sent us an incredible gallery of weirdos from some kind of Steampunk gathering in New York. In case you're unfamiliar with the, uh, literary genre (?), Steampunk is a thing where... no, fuck this, I am absolutely not going to explain what Steampunk is. Just look it up. Anyway, by official mandate, Zack and I were forced to look at these jerks.

Zack: The most elderly-friendly fandom is like a cross between civil war reenactment and LARPing, only not quite as cool as those two things. Enjoy your trip with us to the 2012 Steampunk World's Fair. 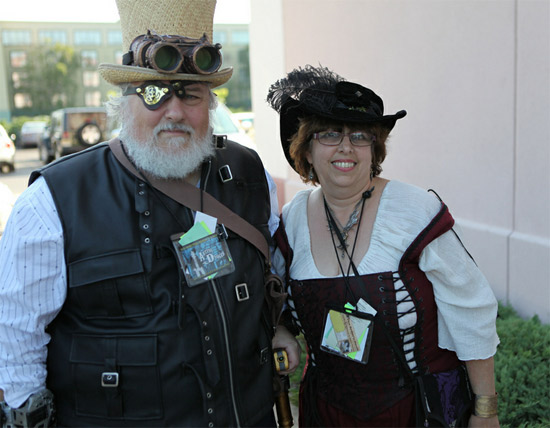 Dave: The cool thing about steampunk is you can use all your old ren faire gear AND your mid-life crisis biker shit.

Zack: I'm sure that hat has seen many an aloe vera Kleenex and crumpled first page of sci-fi manuscripts before it became a hat.

Dave: It looks like something an Indian kid would hide snakes in, like in a Johnny Quest episode or something.

Zack: What do you call a corset that just sort of gave up? A Corseh?

Zack: That is definitely it

Dave: I'm reasonably sure she's got it on backwards, too, but I'm sure as hell not going back there to check.

Zack: Ah, don't be afraid. All you'll find is a blown out pagan moon tattoo and stairs made out of human back fat.

Dave: This guy had major anxiety before he left the house about whether to pick the sweet goggles or the sweet eyepatch, and eventually he was like "fuck it, this doesn't have to make total sense."

Zack: I can just imagine him at home, suiting up Commando style, only with way more grunting, and thinking to himself, "Finally, steampunk has made my eye patch cool again" as he holsters his repainted Nerf pistol.

Dave: There's that old fashion chestnut about taking an accessory off before you leave the house, but I suppose if this guy had ever taken a single fashion tip seriously in his entire life he wouldn't be in this dire fucking situation.