You stopped playing Enemy Pasture Online when the amazing features that lured you in gave way to the repetition and deliberate time wasting that plague all MMOs. Things have changed! Now everyone has a holo-firework kit and can do a /twerk dance.

If you come back today, you'll receive three FREE days of play time. Take advantage of this limited offer to experience the many improvements that have been made to the game since you left, such as: 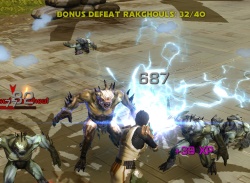 At launch many skills were underwhelming, with obvious flaws in their implementation, very little personality, and wildly differing levels of power. We have completely rebalanced every skill in the game. They are exactly the same as before, but now the numbers are slightly different, and every change to your effectiveness in PVE was made with PVP balance in mind.

All returning players now receive a credit for 10,000 Buckzees. That's nearly half the price of the cheapest item in the game, an experience-boosting elixir which increases your experience rate (only from killing specific creatures, does not apply to turning in quests) for ten minutes and is consumed upon use. Remember, if you want more items you can always use our cash shop to buy more Buckzees. A block of 7,500 Buckzees is only $9.99!

Remember that amazing outfit on the game's box art and in all of our promotional materials? The one that looked nothing like the five sets of armor you came across in your entire journey from level 1 to 99, ranging from cliched to cliched with big glowy shoulder pads and skulls? Now it's finally in the game! It's horribly modeled, barely textured, and it doesn't quite look right in the game's unfortunate quasi-realistic realdoll rendering style, but it's there.

Players complained about the speed of the mounts that they bought for 50,000 Buckzees, and we listened. Mount speed has been increased dramatically across the board. In the interest of balance, you can no longer summon a mount in any location where you would theoretically want to use one.

People were slightly confused by the game's eight competing forms of currency. We went back to the drawing board and figured out a solution. Now players can earn Reputation Badges, Faction Pins, and Dungeon Tokens. Each of these new forms of currency can be brought to an appropriate NPC, who will take an equal amount from each pile (assuming you have the appropriate Currency Pouch) as payment for his service to convert the game's other eight existing forms of currency into universal Renown Coins, which can only be used to buy items which are not purchasable with Buckzees. Remember, if you want the best gear in the game you'll need to buy it with a 1 to 3 ratio of Renown Coins to PVP Trophies. 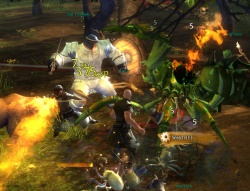 A Stunning Arsenal Of Mind-Blowing Gear!

There are additional weapons and armor with higher numbers. The newest stuff makes the best of the old stuff look like absolute junk. Try not to think about what that means for the new stuff in the future, or what the point of any of this is.

A peaceful village has reported sightings of evil creatures who stand around in evenly spaced positions, walking back and forth over the same patches of ground. Could these murderous horrors come from the long abandoned Evil Mine Of Corruption? Go on an adventure with 31 of your friends to find out! Make your way to an oversized mole at the heart of the mine, then plink away at him for an hour while everyone follows the exact patterns that are necessary to beat this particular boss. If you're lucky, you might get a Boss Voucher! Turn in five of them to get a random piece of gear from an eight piece set.

Thrilling Continuation Of The Legendary Story

Uncover lore to learn how the ancient darkness that corrupted the land is even more ancient than anyone realized! The heroes of this realm have bravely defeated twelve evil gods and the Mega Dragon God, but now a new danger has revealed itself - the Ultimate Dragon God of the Multiverse!