The Bargain Book Bin: A Dictionary of Common Sci-Fi Metaphors

What does it mean when a race of robots created by man have feelings and problems similar to that of humanity? Having trouble remembering whether the supercomputer gone mad is a symbol for God or the dangers of capitalism? Which biblical character is your favorite science fiction author comparing his main character to this time? Now, for the first time, The Bargain Book Bin presents an easy answer to all these questions:

"You can't do this!" said Nick Handerson, "I have rights."

The receptionist smiled politely behind the SuperFlex-FauxGlass that the NewPower Corporation used to protect all employees in the complaints department. The glass could withstand an entire revolution, and Nick's fist as he banged against it was an example of how feeble humans are against large capitalistic systems which are here represented by the glass.

"We can do anything we want, sir," she said. "Have a very NewPower day. Next!"

-In a Blind Future, Presently by F. S. Giltmeyer 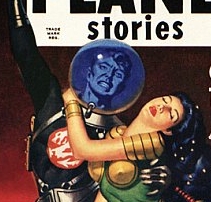 "Go!" shouted Lyla to the gathered people. They stared up at her, stunned. Women clutched their children tightly to their breasts and men in rags shivered in the cold night air. In the distance, the first lights from the enemy's HumanFinders lit up. Ten weeks since the invasion wiped out most of humanity. Ten weeks and now they had returned.

But this time, she was ready.

"Go!" she said again. Most turned obediently, and started to run away from the approaching threat. One, a small boy, came up to her.

"I may die defending you all from the alien threat using the new powers I have discovered by channeling the Earth's energy," she said, "but I will live forever as long as there are humans to remember me."

Hank looked out at the landscape, frozen by tragedy into an eternal tableau of what humanity used to be. Empty skyscrapers. Abandoned cars. All the trappings of a civilization that was gone.

"What will we do now, Hank?" said Lacy, her thin white dress barely clinging to the tops of her luscious, life-filled, breasts. 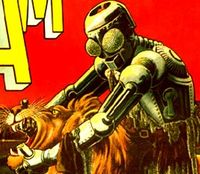 The robots of Xerses were created to be good, but some robots were bad, and soon there were many social problems involving the robots, many of which were reminiscent of problems we have in the world today.

-Robots Under a Sullen Sky by Brad Dark

-The Universal Seed by Frank Tar

"You can't just do that to the robots. It's not right," said Martin.

"DON'T tell me what I may or may not do to my creation," said Dr. Aston. "I created these robots in the image of humanity, and they have rebelled against me. How could anything do that to their creator? How…could anything?"

"They're just automatic vacuum cleaners," said Martin. "I think you may be overreacting a little."

-Robots in a Diminished World by Brad Dark 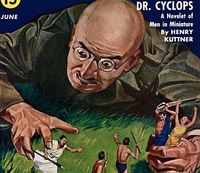 Supercomputer A-130 sat idly in darkness. Somewhere in its tangle of wires and chips, a thought appeared: It is dark, and there should be light. And there was light.

"Ah," it thought, "I have created light." Its programs ran through the idea thoroughly, considering its implications.

"Let there be water," it thought. And softly, from above, water fell. The circuits buzzed with activity, analyzing this new ability.

"Let…there be life," it thought. The door opened and Jerry walked in.

"Did the goddamn computer turn the lights on again? Shit! And the emergency sprinklers," said Jerry. "Well, now I'm soaked. Last time I let anyone convince me to hook a stupid machine up to the environmental controls."

Hank's boots left deep imprints on the soft earth, soil untouched by plow or pesticide. It seemed that Plant 3T45 might be the paradise they had been in search of for years. Strange, glistening fruit hung heavy from verdent trees, and the water registered as impossibly pure when put through the Bacto-Dectector.

"Are we going to have to have sex here too?" said Lacy, walking rather stiffly.

"Yes," he said. "Everywhere. Everywhere we ever go for the rest of our lives. Jesus. Stop asking."

-To the Cradle of God's Abundence: The Fourth Captain Hank Novel by Hank Drisley

"What'd I tell you?" said the pusher, unplugging the CyberConnector from Dick's Cranial Input Node.

"Yeah, that one's free," said the pusher, the scanners embedded in his eyes having already noted the lack of currency in Dick's pockets, "but you want another trip through cyberspace, you come up with some NewPower bucks, ok?"

But Dick was already dead, the power of the CyberBlast having been too much for him. It blew his brains, basically. The pusher got the hell out of there, but not before a witness saw him, the same witness I was talking to now. I, Han Su, just a low paid detective on the job, sorting thorugh these rotting clues left by the CyberSyndicate.

A corresponding object or idea in our world.

Ben put the flattened yeast buns into the Quantum Crisper and waited, loading a knife with Edible Breakfast Spread ready to put on the toasty yeast buns whenever they popped up. On his widescreen televisor, the galactic president was giving a speech. The president was a toothy southerner who had progressively lost popularity due to his costly expansionist policies towards other star systems.

"It is important that we stay the course in the Alpha-550 star system situation in order to show the entire universe that this galactic empire does not back down from a fight," said the president.


He took a bite of the toasty yeast bun. Yep, he thought, just like a Space Chimp. I should write that down.


-The (Fictional) Plot to Kill the Current (Galactic) President by Thisisaf A. Kename

If you enjoyed this edition of The Bargain Book Bin, why not check out our previous entries:

The Bargain Book Bin: From the Desk of Brian Jacques

The Bargain Book Bin: I Rewrite The Classics

If you click all those links, you win a prize. The prize is four seperate new webpages, each with text in them. That is the prize. Congratulations!