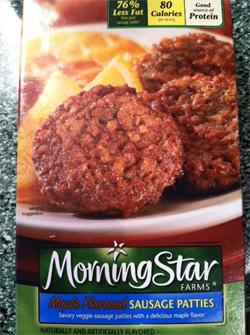 The XH-60 Backhawk helicopter came in low through the valley. The pilot was flying Nap of the Earth. He was using the sensors in the helicopter to stay low and hug the terrain. In the back, Specialist Ding Chavez pulled on his low light goggles and swapped in a new battery. As the fuzzy green image resolved he could hear Captain Bennett going over the mission objectives one last time.

"We fast rope in on the TOB. Whiskey Bravo will be on station for immediate evac. When we have the objective we will exfil to the roof and activate our IR strobes. The objective..."

"...is the most delicious soy-based sausage substitutes ever devised. MorningStar Farms® Maple Flavored Veggie Sausage Patties are only 80 calories. MorningStar Farms has added just a hint of maple to up their game. They go hard, we go hard, and we never leave a man behind. Do you understand me?"

"HOOAH!" was the reply. Ding Chavez joined it, but could not help but thinking something just wasn't right.

"We have to negotiate," said the woman, in the pantyhose, from the UN.

"I agree with the ambassador," said the assistant Secretary of State, a liberal.

"Then it is agreed?" asked the President, searching the room for any objection.

Jack Ryan stood up. Maybe not so fast as he once had before that jet fighter incident in Malta. He slammed his fist on the President's desk.

"No it is damn well not agreed. Who will we be negotiating with, Mr. President? The Chinese already have their own delicious chicken substitute with formula 19. And now they have the plans for ours. Why would they give us our plans back when they could just sell it back, one fake bird at a time?"

The woman from the UN could sense the shift in the center of gravity in the room. She blustered to try to cover for the undeniable weakness of her position.

"We have to exhaust every option, Mr--"

"They've all been exhausted!" snapped Ryan. "Mr. President, I have a team ready to go. We will retrieve the MorningStar Farms® Grillers® Chik'n Veggie Patties from that ship. Let the Flying Dragon trying to stop us. Now if you'll excuse me, I have an op to lead."