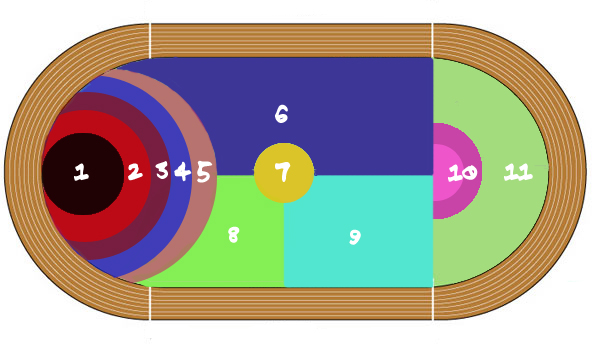 Due to a mandate by the Chinese Government, all Chinese gold medal winners are to sacrifice their medal at the large smelting plant. The medals are heated and all impurities are removed. The station is worked by all the children owned by the Olympic athletes. This way the children get to feel the glory of success as they work over molten gold ore. A portion of the gold is placed directly into the Peoples' treasury, the rest is used in The Peoples' Statue.

The acquired gold will be used to build a large golden statue. Officials state that the purpose of such a statue is to prove to the wold that China is a first rate power. The final design is still a secret, but many expect that it will face America and be either a gazing panda or a naked man stretching his anus to a large and disproportionate size.

This area will appear blank throughout the ceremony to all viewers within the Bird Nest; however, all global viewers will see a computer generated firework show insulting their homeland. Numerous displays will be presented throughout the ceremony including the simple "Booya [nation]", a "thumbs down superimposed over the nation's flag", and the impressive "Picture of Mao Zedong Looking Smug".

Sand will be poured onto the field for the sake of reliving one of the most enjoyable portions of the Olympics. Yes, the male/female beach volleyball teams and all the bikini dance girls will come out and stand around while forty second sound clips of your favorite songs from 1998 - 2002 play on repeat. Expect to hear some Gwen Stefani. A real crowd pleaser!

The last portion of the field is for the introduction of the terrible 2012 London Games. Boo!

Rush will play the entirety of their album 2112. The music will be edited to state 2012, and Geddy Lee's passport will be edited to state that he is a British citizen. All the drummers used in the opening ceremony will reappear in Neil Peart's drum kit. David Beckham will be there too. Though the London games attempt to appear super hip, this portion will be enjoyable to anyone over the age of forty, while all children will state that it is trying too hard.

We do not know what is happening in this area. We do not care either. The British will probably attempt to show how great they once were through images of colonialism or the Opium Wars or something. Did you think we forgot about that one Britain? Now who is forcing items onto whom? Good luck London, you jerks.