At a Glance: Why is it that nobody can ever create a Christian game that's good? There have been good games based on, say, Norse mythology, but when it comes to western mythology no one has ever been able to create even a decent game. All the elements are there - you've got floods, lightning, plagues, human sacrifices and mass murders being carried out by an omnipotent yet massively hypocritical overlord who throws the people he claims to love into a lake of fire for all eternity and occasionally fucks over someone innocent like Job just because the devil tells him to. That would translate perfectly into an action game where you fight your way through the various chapters of the Bible and end up in a battle against either Satan or God, or maybe both of them together as a tag team that has no qualms about using illegal team-up moves when the ref's back is turned. But no, instead we get Bible Adventures, Saints of Virtue and this godawful game, which was probably made by a satanic programmer to get kids to drop out of Sunday School and throw their bibles into the ocean.

"Forgiveness" is the debut RPG release of Breakthrough Gaming, and they are so proud of it that they put two ad banners for Forgiveness right next to each other on their own site. You can tell they are a cutting edge company when you see their header graphic, a gray rectangle with "Breakthrough Gaming - Gaming to the Next Level!" crammed into the left side next to scenes from Columns and Super 3D Noah's Ark. Breakthrough Gaming is a company for people who obsess over their religion and are afraid that doing anything not directly related to Christ is a sin for which they will be eternally damned or perhaps given a room in heaven next to the noisy ice machine, a concern cited by popular recording artist "Weird Al" Yankovic. Breakthrough Gaming is devoted to Christian gaming, Christian movies, Christian TV shows, Christian anime (?), Christian death metal, Christian hip-hop and a number of inadvertently hilarious articles, such as a hard-hitting investigative piece entitled "Digi-Dilemas and Poke-Problems!", a report that details exactly how Pokemon and Digimon are turning our beloved children into devil worshippers.

The greatest section of the site, known as "R U into GOD?", makes a clumsy attempt to deal with the common question "Hey, why does your religion make absolutely no sense?" For example, if God created the earth, then who created God? Well, let's take a look!

The question of who made God can be answered by simply looking at space and asking, "Does space have an end?" Obviously, it doesn't. If there is a brick wall with "The End" written on it, the question arises, "What is behind the brick wall?" Strain the mind though it may, we have to believe (have faith) that space has no beginning and no end. The same applies to God. He has no beginning and no end. He is eternal. 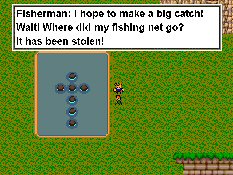 One of the game's more challenging puzzles.

Oh, okay! You know, I'd always wondered what was on the other side of that brick wall my neighbors built in front of my front door and around every single possible exit from the building, but now I know that because something is on the other side of the wall, God is eternal! That's a comforting thought, but I'm a clear-thinking individual and it's gonna take more than that to convince me. You know what it's gonna take, God? It's gonna take an RPG, because ever since I was five or six I've only been able to digest information in videogame form. Fortunately this soul-saving videogame was available for free on their site, so I downloaded it and prepared to experience all the forgiveness and salvation they could possibly cram into a one-megabyte download.

You start out in a bustling town that consists of three empty buildings and a confused fisherman standing next to a pond. There is one exciting landmark in each quadrant of the town, and one in the middle.

Northwest: The house where your stupid little crusader begins his adventure. You start in giant empty room next to two giant apples that are bigger than you. Your dad and your short, fat mom are hard at work standing by the door waving their arms around for some reason / no reason. Maybe they're just trying to swat all the bugs flying freely into the room, since instead of a door there's just a mouse hole punched out of the wall. You can talk to both your parents, but they're both identified as "Dad", leading me to believe....actually I have no idea what that would lead me to believe, but I know it's pretty damn sexy.

Northeast: There's no house here at all, just a big mound with a giant apple and a conch shell. Apparently Jesus was a really crappy carpenter, since he wasn't able to build a fourth house to keep the other three company or even make a war mill to let him upgrade the damage of his thrown weapons and gain +4 on his saving throw against crucifixion.