If there's one thing people hate, it's being videotaped. From educational films about puppies, to zany pranks with your junior high buddies, to German fecal dining cinema, it's all the same in the public's eyes! ! I, along with the rest of the crew of Mega64, deal with this subject on a near-daily basis. Whenever we film our video game parody skits, we try to include, and harass, as many people in public as we can. But this can be difficult, as 99% of the people outdoors achieve schizophrenia as soon as a camera is whipped out! What should you look out for, you ask? I speak from our own personal experience in telling you that the general camera-avoiding public consists of seven main groups. 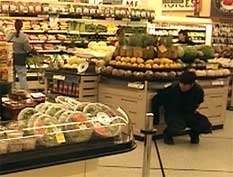 IS THAT SUPPOSED TO BE SOLID SNAKE?? YOU GUYS SHOULD HAVE MADE SNAKE FALL DOWN MORE AND THEN LIKE STAB A KID, ALSO WHY ARE YOU FILMING MY GIRLFRIEND?

Don't even THINK about filming anywhere near this specimen. They will find absolutely any reason to spray mace in your eyes and call the police. Take, for instance, the time Derrick and I filmed a skit based on the game Banjo Kazooie, in which I walked around town in a bear costume while eating Fritos. When it came time for people to sign release forms, one woman in the distant background absolutely REFUSED to sign, stating not only that she thought I "was going to steal her purse with that mask on," but that we might try to use her face to sell anything we want. I think there might be some holes in that logic, as I can't seem to remember the last time anyone used an irritable soccer mom bitching at a grizzly bear to sell cola.

2. Guys Who Will Tell You You're Filming Girls

Without question, you will encounter this group every time you film. No matter what you're filming, even if it's the ghost of freaking Adolf Hitler sitting upon a flaming stallion; as long as there are females within ten miles of the filming area, these jackasses will insist you're filming them. This was the only actual comment we received when we filmed our Super Mario Bros. skit. The sight of two of the most iconic fictional characters in history, from video games or otherwise, was not enough to deter hot-tempered boyfriends and angry fathers from thinking we were actually filming their daughters for "Hot Wild Ugly Girls At The Mall Wearing Sandals XXX."

Now here's a fun bunch destined for stardom for sure! If caught on camera, these fine folks will do their best to ham it up by attempting to do something funny. Unfortunately, this species is a dying breed because nearly every attempt will fail miserably. Ha ha, watch the funny man poke the actors with a fishing pole while they're trying to film! Oh ho ho, look at Darkel from West Hills High School pretending to be a chimp in the background of our Metal Gear skit! LOL, check out that guy named "Cree" bust out the latest 50 Cent cuts while you're trying to film a scene about Tetris! Ahaha, take a gander at me, erasing all the videotapes! Using my toilet! And my urine! 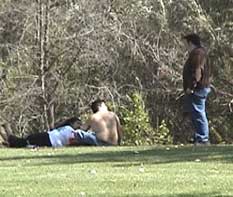 LOOK HOW THAT GUY PLAYS WITH TOYS HE MUST BE GAY!!!! AHAHAH IS THIS FOR THAT JACKASS SHOW?? ARE YOU FILMING JACKASS??? I MEAN JACKBUTT SORRY MOM!

4. People Who Already Had Your Idea

Let's face it, folks - none of your ideas are original. In fact, even if you spend years of your life developing original ideas for a film, odds are you probably stole each and every idea from someone else when you weren't even conscious! At least that's what this group will make you believe. After taping your bit of choice, these upstanding citizens will be sure to email you afterwards and tell you about how they had the exact same idea five years ago when they lived in Florida with a bunch of roommates that were way funnier than you could ever be, even if you stole their idea of being funnier than you currently are! Then they'll refer to you as a "bastard" for living in California and having so many "connections" while they lived in Podunk, New Jersey with no one to help them make their fantastic idea come to life. They may attack and create frightening situations, similar to the hit movie "The Secret Window." But also like "The Secret Window," you will at the end realize that all of this was just a result of them being mentally retarded, and you will turn off the lights in your room and cry at the fact that you wasted your night thinking about any of it.

This specimen will carefully observe your filming session, decide they hate / envy it, and then quickly give you a reason why you should feel bad for filming anything at all. We staged an assassination for a Hitman skit at a nearby park. Once the cameras were shut off, a woman marched up to us and stated that our big scene had disrupted the party they were having - a "celebration of a baby's death." That, my friends, is an actual quote. We looked around and saw only balloons, presents, and other festive decorations strewn about the park tables. This means either the woman was lying or that dying babies are a hell of a lot more fun than any birthday I've ever had. In any case, simple logic will get you out of any tussle with these people. Simply tell them your planned assassination was just a way to send their dead kid another friend to play with, and they'll happily be on their way! 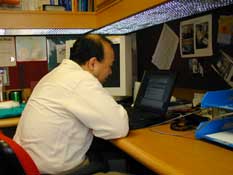 DEAR MEGA64.COM YOU TOTALLY COPIED THE IDEA ME AND MY FRIEND TRICK WHITEY HAD SIX YEARS AGO ONLY OUR SHOW WAS ABOUT GIRLS' BUTTS P.S. YOU GUYS FILM GIRLS RIGHT????

Put yourself in our shoes for a moment. You're outside, at the park, wearing only a diaper. You're cold. You only have one shot left to do. As you run about, you hear this shrill cry distinctly in the background: "HEY WHAT ARE YOU DOING? WHAT ARE YOU DOING? ARE YOU GUYS FILMING JACKASS??? IS THIS A JACKASS SHOW??? MOM WON'T EVEN LET ME SAY JACKASS IS THIS A JACKBUTT SHOW??? GET AWAY FROM ME YOU GAY MAN!! HEY YOU SHOULD HAVE THAT GUY'S DIAPER FALL OFF! HEY YOU SHOULD HAVE THAT GAY DIAPER MAN JUMP OVER A PIECE OF FIRE AND GET HURT!!! AND THEN HE BLOWS UP LIKE THE CHALLENGER!!! CHALLENGE!!! CHALLENGE!!!" Then you realize why people like Shawn have so many child murders on their record.

The one type of person you actually want to come across at you're filming session. If you stage any kind of fake fight or attack, this is the guy who will think it's real and barge in and try to break it up to save the day. This actually happened during the filming of our Ghosts 'N Goblins bit, in which I dressed like a knight and fought a skeleton in a parking lot, and a man ran out of a bar to break up the brawl. This is a prime example of how this specimen will either A) Genuinely try to just look good on camera or B) Be SO drunk that they actually believe a zombie is SERIOUSLY pissed at King Arthur in the Target parking lot. Either way, this is a big ugly beer-scented plate of comedy just yours for the taking!

In conclusion: Just throw your DV camera away and give up. Try a safer profession like bird watching. That way, when the flaming ghost of Adolf Hitler on a stallion does finally come by, you can continue to film all the shopping mall girls you want without anyone having a single suspicion.

Props to my Goonion Pack

You remember that episode where Picard and the crew of the Next Generation Enterprise go back in time and data accidentally steps on a bug on the prehistoric Earth and when the ship returns to normal time, they find out that the Earth has turned into a huge plate of waffles? No? Okay, maybe I'm really confused, but the point is that time travel is a dangerous thing. Imagine what would happen if we sent people back in time right now? Oh man, the thought of FDR with spinners on his wheelchair scares me. Of course with this in mind, the Goons took it a step further.