If ever, oh ever. a wiz there was, the Wizard of Oz is one because he has a new movie out this week in the form of Sam Raimi's Oz the Great and Powerful. Following that, we have some mother/son bonding in The Guilt Trip and some hitman/target bonding in Dead Man Down.

Oz the Great and Powerful

EXPECTATIONS: Sometimes I have to remind myself that the people who make the movies I review generally know what they are doing. Sam Raimi is an especially smart and inventive director who positively has to know more about films than I do, and yet about 25 seconds into this trailer, I feel the need to correct him. Zach Braff is throwing a hat toward the camera, indicating to me that the black-and-white portion of the film is going to be in 3D. This irritates me every time I see it, because obviously the sensible thing to do would be to put the black-and-white stuff in 2D, and switch to 3D when we switch to color, and the opening bass line to "Money" kicks in if you happen to be watching alongside Dark Side of the Moon. I mean, that just makes sense, right? Surely my insistence on mentioning this at every opportunity has no correlation with the fact that I'm seeing this movie alone.


REALITY: Some films and TV shows only work because of the brilliant casting of the lead. Without Robert Downey Jr, Tony Stark would be an unlikable jackass. If anybody but Steve Carell had played Michael Scott, The Office would have been the most annoying series on television. And, of course, Jaws wouldn't have been the same if they'd chosen a toilet instead of a mechanical shark.

Oz the Great and Powerful posits a similar but entirely separate scenario: There is nobody, really no one, who could have made this particular adaptation of Oz EXCEPT Sam Raimi. It's really just the perfect film for his skill set: Any Oz film must mix silliness and scariness (Raimi's specialty blend), and in this case it has to garner a PG rating while still traumatizing some kids for life, as is tradition. 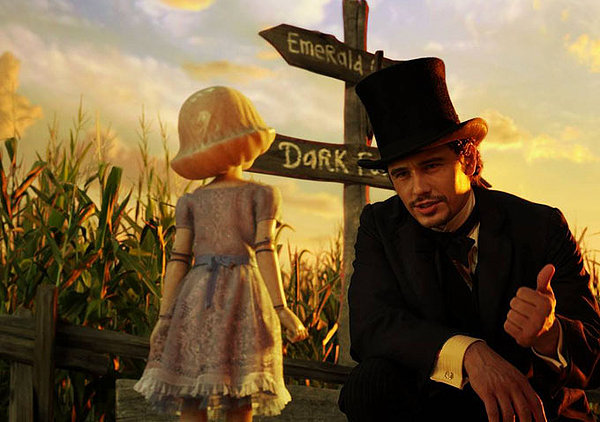 Nothing about this strikes me as unusual.


Set approximately 20 years before that OTHER Oz movie that Disney doesn't want us to talk about because Warner Brothers still owns all the rights, this Oz introduces us to Oscar Diggs (James Franco), an egocentric small-time carnival musician whose womanizing ways get him sucked into a tornado and transported to the world we know as Oz. There he gets dragged into a war involving three witches: Theodora of the West (Mila Kunis), Evanora of the East (Rachel Weisz), and Glinda of the North (Michelle Williams). Apparently there's no such thing as "South" in Oz.


Following in Dorothy's footsteps -- but not really because Dorothy isn't born yet-- Oscar picks up some companions to be his comic relief and moral compass in the form of a flying monkey named Frank (Zack Braff) and a girl made of fine china who is creatively named China Girl. (From the equally-creatively-named Chinatown.) I won't go further here, because you already know how this story ends. I do, however, feel the need to point out that the last sentence of the Wikipedia plot summary for this movie is currently "He gives Glinda some sort of unspecified romantic relationship." That's pretty much my favorite description of any on-screen relationship ever. 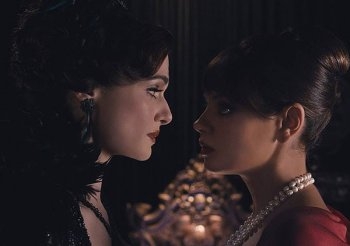 Is it getting hot in here, or is it me?

One reason I say that Raimi is a perfect fit for Oz is that his films always possess a creative sense of geography. Whether it's a cramped superhero fight in New York City or a western town shoot-out, Raimi always sets up his action sequences and his worlds so that there is a defined sense of exactly where everyone is and how far away everything is from everything else at all times. When you have a film like Oz, which relies extensively on travel and distance, it goes a long way toward creating a realistic and believable setting out of what is supposed to be an unbelievable land. Compare this to, say, Tim Burton's Alice in Wonderland, where characters just show up hundreds of miles from where we last saw them because no one cares, or the final fight scene of The Avengers, which basically decides that being really good at archery means a dude can also run 16 city blocks in about a minute and a half. Raimi could have just said "Eh, whatever. It's magic," but he doesn't, and that's a respectful move on his part.

The 3D format lets Raimi take that natural sense for where characters are in the scene and apply it to where his universe is on the screen. The black-and-white intro period I was whining about earlier is set in 1:37:1 academy ratio, which, when put in these terms, only massive nerds will care about. But you should care, because it lets Raimi basically turn the screen into a diorama, telling the audience how far into the frame everyone is. The mistake we've always made with 3D, which we're thankfully getting away from, is that directors want to push things out toward the audience. You can only get so close to an audience member's face, but if you instead push into the frame, you have a near-infinite range of depth, and Raimi clearly has fun exploring it. He even breaks the "walls" of his self-contained world, sending a fireball or a bird out into the black bars on either side of the frame. 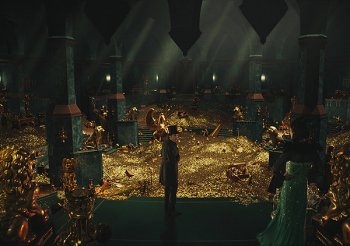 You're sure there's no dragon under there?Technical wonderment aside, there are flaws in the direction of the film. For much of the second act - in fact, pretty much from Oscar's arrival in Oz- it feels like Raimi is keeping the movie on a leash. Kunis in particular seems bored during this stretch, but the logic behind her casting becomes increasingly obvious as the film draws directly from Black Swan in a few brief scenes. This leads to some major pacing issues, as the film drags along in the middle. It's really more of a victim of being as faithful to the original film as is legally possible. You don't remember this, but the 1939 Wizard of Oz has the same problems. Seriously, watch that movie again, did you know the Cowardly Lion sings an entire song about being king of the forest? No, you didn't, because what your adult brain remembers of The Wizard of Oz is really about two-thirds of the film's actual runtime. (Same with Chitty Chitty Bang Bang.)

Much like the shift from sepia to color, the film shrugs off its subdued middle portion and kicks into high gear in the third act, when Kunis gets to stretch the wicked witch act into full-on goofiness. The third act is pure fun, making what is essentially a total lack of action seem visceral and exciting.

Other than pacing, any complaints I have stem from Michelle Williams's character being relatively bland and uninteresting; in her defense, there's just not much to do with Glinda. Fortunately, we have Rachel Weisz hamming it up like crazy to make up for it. Zach Braff's comic-relief monkey manages not to be annoying, and James Franco makes some funny James Franco faces. Overall, it's pretty much exactly what a Raimi Oz film should be. It's kinda nice not to be surprised for once.

MINORITY REPORT: People keep telling me I'm going to love this film because it plays around with aspect ratios. Aspect ratios are, after all, one of my favourite subjects to bore people with, as anyone who follows me on Twitter will know. - Ian "Professor Clumsy" Maddison