Critics often scoff at remakes, but when it comes to source material for cinematic adaptations, you could do a lot worse than drawing from other movies. Now I'll hand you over to Joseph "Jay Dub" Wade, who takes the reins this week to review Conan the Barbarian and Fright Night, two films you probably saw the first time they were films.

EXPECTATIONS: After Robert Rodriguez wasted five years talking up a remake of Red Sonja, Lionsgate decided to beat him to the punch and remake Conan the Barbarian instead. I'm not really up in arms about this. Outside of some excellent dialogue and the sight of Arnold Schwarzenegger swinging a sword, John Milius' original Conan film didn't make an especially strong impression. It's cheesy and stupid in the way that only a film from the early '80s could truly be. That said, I'm not expecting this remake to come anywhere near the Milius film. Chances are good that this will just be a hack-n-slash video game in movie form. If the action is good, that's all it needs to be.

REALITY: Despite being by far the most expensive remake of the week, Conan the Barbarian has all the hallmarks of a shitball action-fantasy done on the cheap for the SyFy Channel. The special effects are tacky at best, most of the cast members look like they'd rather be balancing their checkbooks, and the script would only make sense to a crazy person. That's not to say that the film isn't without its fun moments, but sweet Jesus it's the dumbest thing this side of Transformers. 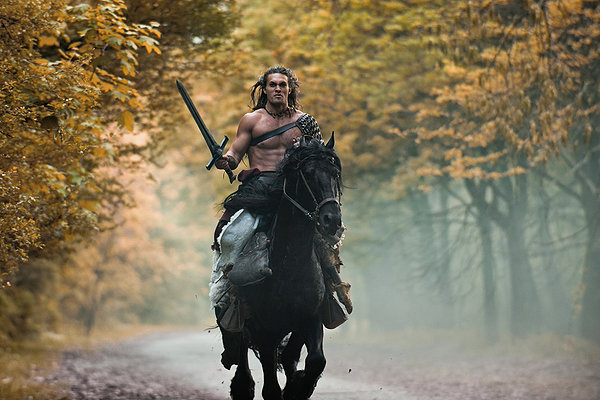 That has got to be dangerous for the horse.


Conan tells the story of a young boy who watches his father murdered at the hands of a warlord named Zim (Stephen Lang). As an adult, Conan's only mission in life is to find this warlord and exact his revenge. It's a loose retelling of the 1982 film, but then again it's also a loose retelling of Batman Begins. As an adult, Conan (Jason Momoa) races across the land freeing slaves and seeking out anyone with knowledge of Zim's whereabouts. He soon finds the man laying siege to a monastery. Zim is searching for a pure-blooded girl named Tamara (Rachel Nichols), whose blood will supposedly grant him godlike powers. Conan rescues Tamara, and together the two must confront Zim and stop him before he can take over the world with his black magic.

That last part is pure conjecture, as it's never outright stated what Zim's endgame strategy is. In fact, the film doesn't really even bother telling us what Zim's godlike powers are. Power over lightning? Power to raise an army of zombies? Power to rain pizza from the sky? In order to understand why Zim is an evil warlord and not simply some jackass riding on a landboat, we kind of need to know the extent of his powers (or what they eventually will be). 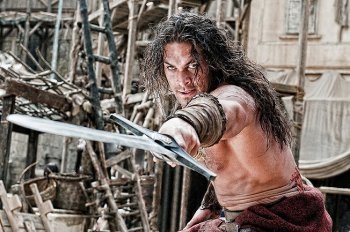 3-D sword attack! It's like you're actually being stabbed.But I'm getting ahead of myself. The fact that the film doesn't even understand the concept of establishing the stakes should tell you right away what kind of movie this is. It's not a movie concerned with proper story structure or the natural progression of a plot or clearly defined characters. It's M.O. is simply "See Conan kill. Kill, Conan, kill." If that's all you want out of Conan the Barbarian, then you'll get that in spades. There's a good deal of bloodshed and violent action in this film, but those scenes are strung together with twine and shoelaces.

If there's any one thing that Conan managed to get right, even if only by pure happenstance, it's that they found a Conan with more natural charisma and pure talent than Arnold Schwarzenegger. Last seen playing the exact same character on Game of Thrones, Jason Momoa plays Conan as a single-minded warrior on a mission, but by God does he love that mission. The sheer glee with which Conan crushes his enemies is infectious in certain scenes (when the people behind the camera aren't fucking things up). While Arnold's performance was iconic for how utterly stone-faced he was, Momoa takes the other route and actually gives Conan a personality. Don't get me wrong, that personality is still gruff, violent and more than a little misogynistic, but between the two versions I prefer Momoa's.

So okay, at least they got the title character right. What did the movie get wrong then? Pretty much everything else. Stephen Lang and Rose McGowan play two utterly boring villains whose motivations, simple though they may be, are never fully explained. Lang basically does his "Bad Guy from Avatar" routine with a funny accent, while McGowan stands around in a rejected Phantom Menace costume and pouts about having no eyebrows. They spew nonsense about ruling the world with some Lego mask that Zim put together, but once Zim puts the mask on, it appears to only give him the power to shout at gravity to make rocks fall. 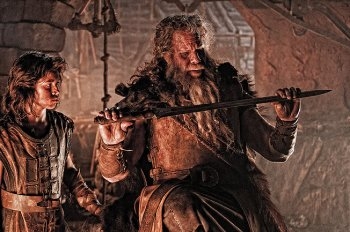 First person who makes a "war never changes" crack gets a sword to the groin.There are about a dozen battle scenes strewn about the film, and for every one that's somewhat visually exciting, there's one that just feels ripped off from another movie. In one scene, Conan fights a tentacle monster that looks smuggled straight out of Pirates of the Caribbean; in another, he fights sand people who do parkour, vaguely reminiscent of Prince of Persia. Then the final battle takes place in a dusty hallway and looks like something out of one of the shittier Highlander sequels. Actually, this film probably could've used one or two more horribly gruesome beheadings; you know, just to shake things up a bit.

In addition to the plot making no sense and most of the cast stumbling through this thing blindfolded, the whole production somehow looks phony. The special effects look good for 1999, and the green screen work is occasionally embarrassingly bad. The only explanation is that they blew their entire $90 million budget on fancy fur pelts and squibs. I'm guessing they ran out of cash somewhere during Conan's battle with the big tentacle monster, because the scene just sort of ends without any resolution other than "Conan gets away."

If, for some reason, you find yourself sitting down on a Sunday afternoon and happen to find this film gracing your TV screen, take my advice and watch the first fifteen minutes. There's some genuinely exciting stuff in there, as we get to witness Conan as a child training to be a barbarian warrior. As much as I enjoyed Jason Momoa's performance, the early scenes of Kid Conan and his father (Ron Perlman) are far more engaging than anything that comes after. Once Conan grows up, you could keep watching, or you could go outside and do what is best in life: anything else.

MINORITY REPORT: The original Conan the Barbarian was brilliantly operatic, casting aside storytelling logic for the sake of pure cinematic craft. This is just Clash of the Titans for a slightly older, yet no more mature audience. - Ian "ProfessorClumsy" Maddison