The Rape of Otis Nixon 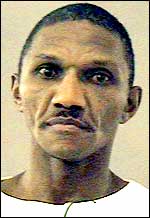 Otis Nixon's recent mugshot. He's soooooo dreamy...On Tuesday it was announced that members of the Baseball Writers' Association of America. (BBWAA for short, pronounced "BAH-BAH-W-WAHHHHH") elected Wade Boggs and Ryne Sandberg to the Baseball Hall of Fame in Cooperstown.

The issue at hand is the rape of Otis Nixon.

I'm not talking about the literal rape of Otis Nixon, although I'm sure many a woman has flung themselves onto his love gourd. I'm speaking of the metaphysical rape. Wait, that's not the right word... I think I mean... what's that word? I can't think of it. It sounds like "fluge." Anyways, this was Otis Nixon's first year of Baseball Hall of Fame eligibility and he was wisely put on the ballot by whoever decides these things. And guess how many votes he got?

Can you believe that? Last year Pete Rose finally admitted that he had gambled on baseball back when he was managing the Reds and had been lying to everyone for over a decade... and he still got nine write-in votes, despite the fact he isn't even eligible for election anyway. Crack-addled drug abuser Daryl Strawberry got six votes and celebrated the occasion that night by picking up two prostitutes off the street instead of just one. Even Tony Phillips (WHO?!) and Terry Steinbach got a vote apiece. 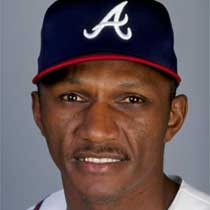 Young girls of the early 1990's soaked their shorts to this image.

Otis Nixon is possibly the greatest person in the history of the entire world. And he's one of the most dashing looking gents you will ever feast your retinas on! As Lowtax said of Otis in a Steal of The Century video we did a few years ago, "I'm not gay but I'd love to kiss him."

Here's a quick list of just a few of Otis Nixon's many noble accomplishments. And I swear these are all completely true:

Otis Nixon stole more bases in the decade of the 1990's than any other player in baseball, even beating off (har har) Rickey Henderson.

Nixon was once traded in a deal for Jose Canseco, he was that good! Speaking of which, log on to JoseCanseco.com right now! His World Series ring is still for sale!

In 1991, Nixon stole a career-best 72 bases and led the Braves to the playoffs.

Also in 1991, Nixon was suspended after he tested positive for cocaine. He was previously sent to drug rehab in 1987, but I guess it didn't work!

Just about one year ago today, Otis Nixon was arrested at a hotel after threatening his bodyguard with a knife. Here's some details (thanks AJC):

Brown said he went into the hotel room and noticed that Nixon was naked and yelling into his cellphone. Brown said he asked Nixon to put some clothes on, but Nixon ignored him. Nixon became upset when Brown asked him to repay some money that was owed him, Brown told police.

Still naked, Nixon grabbed a kitchen knife and chased Brown out of the room, according to a police report. During the scuffle, Nixon also threatened him with another blade, a black-handled folding knife, Brown told police.

Nixon was also heard yelling: "I will cut your heart out," according to the police report. Brown was not harmed during the incident.

Nixon told police that Brown was the aggressor in the fight. Nixon said he was naked because he was waiting for his female friend to arrive.

That sounds perfectly reasonable. After all, like I said, Otis is quite the ladies man! Speaking of which...

Also in 2004, Otis was arrested for "inappropriately" fondling a woman at his home. The cops called it "misdemeanor sexual battery," but I'd call it a "dream come true!"

Finally, if you still aren't convinced Otis Nixon deserves to be elected to the Baseball Hall of Fame, carefully examine the following image. 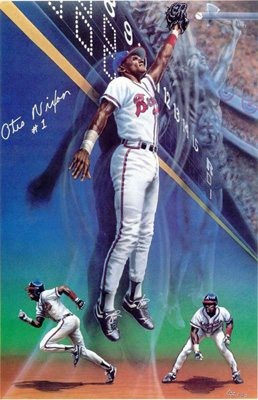 Not many people know that the Atlanta Braves outfield was haunted. It was very difficult for Otis Nixon to play stellar defense out there with all those Native American ghosts trying to tomahawk the ball away from him!

But Otis Nixon went out there and posted a lifetime .988 fielding percentage despite all those spooky obstacles. You know why? Because Otis Nixon was (and still is!) a beautiful, wonderful, special, one-of-a-kind human being. And also he was high on cocaine most of the time.

Otis, you may have made a career out of stealing bases, but you also stole our hearts. Sometimes literally, you know, since you cut them out yourself.

I'll see you in Cooperstown.