Lamentations of the Flame Princess is grimdark fantasy role playing by way of Finland, grimmest and darkest of Northern Europe's nations. Sorry, Norway. Based on retro D&D, James Edward Raggi IV has created an Open Game License version skewed for Robert E. Howard and H.P. Lovecraft. None of that is really going to matter to you once you see the "grindhouse" ultra-violence and bizarre sex portrayed in the artwork. This is what those creepy early D&D modules might have evolved into by 2011 if nobody ever told Gygax one of his ideas was too insane and Erol Otis was still kicking out artwork for supplements. 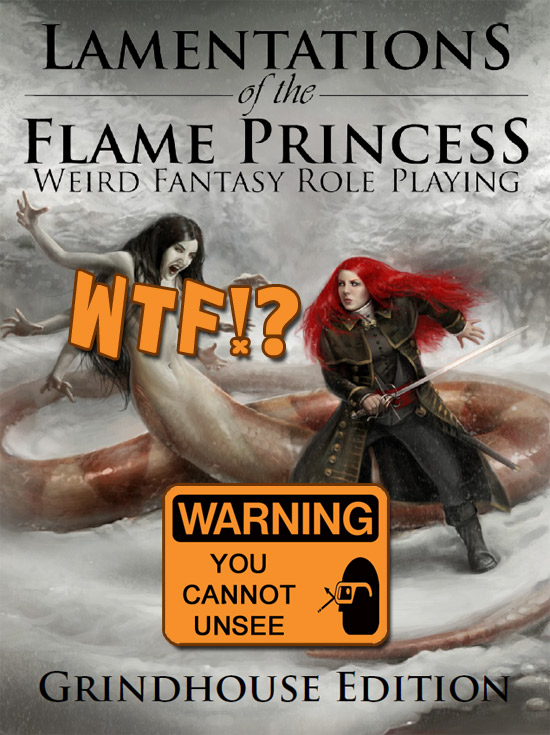 Zack: Pretty sure this is the first time we had to censor the cover of a core rulebook.

Steve: You chose to censor it, dude. You let the man tell you whether or not you can show a demon snake lady's rack.

Zack: That'll be the last time we censor the artwork. Buckle up, because we're delving down a hole that may top the infamous bathroom bloody strap-on from Vampire.

Steve: I gotta say, one criticism, right away, is that there are three separate books and like 50 pages of example gameplay and then they don't include a dang monster.

Zack: I think the idea is that the horror is supposed to be derived from the atmosphere and events and not three hit-dice worth of kobolds.

Steve: Copout, man. Leave it to me to decide how to make those kobolds scary, don't tell me to use my imagination like I'm eight years old.

Steve: If you were walking down the street and you hear like a woof sound and you look over and there's this little lizard dog man coming at you that would be pretty messed up. But now, like imagine you're on a bus and listening to your headphone and then you look up and the bus is ALL kobolds and they're ALL staring at you.

Zack: They're just staring at me because I am the hideous monster in their world. It's like that Twilight Zone episode.

Steve: That was on an airplane not a bus.