Before his seminal literary career, minimalist author Raymond Carver briefly tried his hand at television writing, submitting several plots to Rod Serling's The Twilight Zone. None were accepted, and Carver soon moved on to short fiction. Carver's estate recently auctioned off his original Twilight Zone plots, which Something Awful has purchased in order to share with fans and literary scholars worldwide.

"Where I'm Calling From (Hint: It's the Future)" 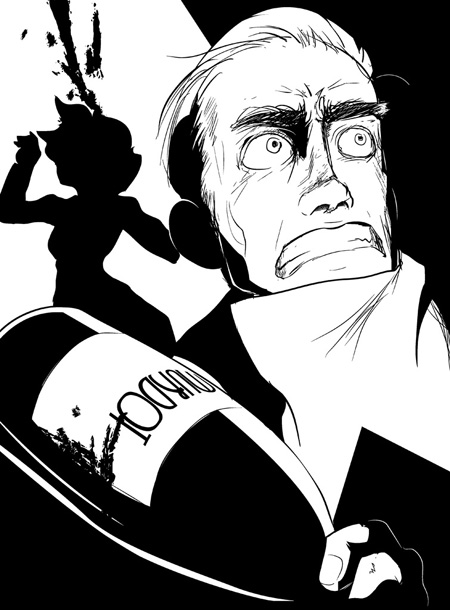 A 30-year-old man is walking home from work when he bumps into a young boy. He tells the boy to watch where he's going. But when he sees his face, he's shocked: The boy is actually a younger version of himself. He realizes that he's traveled back in time to his own youth.

He introduces himself to the boy and reveals that he's his future counterpart. His younger self looks disappointed and begins asking probing questions, like how he got so fat, and why he's so shabbily dressed. The man explains how he had to drop out of high school to support a family and currently works minimum-wage factory jobs and lives paycheck to paycheck. His younger self is appalled and vows never to make these mistakes. The man is then transported back to the present.

He looks around his house and sees it's now in a wealthy surburb. The living room is filled with expensive furniture. His wife walks into the room. She's thin and attractive now. He greets her, but she just frowns. She tells him she knows about the affair he's having with his younger secretary.

Instinctively, he takes a wine bottle and hits her in the face. She falls to the floor. He stares at the bottle, horrified. Getting rich, he realizes, has made him an abusive, womanizing drunk. He begs whatever force sent him back in time to send him back again so he can fix what he's done.

Then he wakes up. He's in the bedroom of his dirty, low-rent apartment with his wife, who's unattractive again. She tells him he was having a nightmare. Then she asks him to fix the fridge, because it's been broken for over a week. He belts her across the face; he just bought her a new ironing board and she has no call to nag like that.

A middle-aged man watching television is surprised when the news anchor suddenly addresses him by name. The anchor identifies himself as Death and tells the man he has one hour to live. He decides to spend his final hour saying goodbye to his friends, but then realizes he doesn't have any, because his alcoholism has driven them all away. He then attempts to make love to his wife, but she's become emotionally distant and there's no longer any intimacy between them. Depressed, he turns the television back on and asks if he can die early, because his life is meaningless anyway. To his surprise, the anchor ignores him and simply recites the evening news. He drops to his knees and starts sobbing, pleading for death. The camera zooms out through the window and we see the man's house and a giant sign next to it saying "HELL." 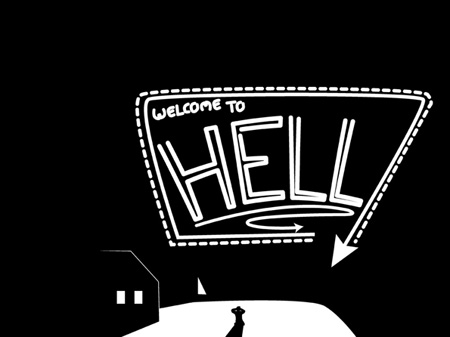 "I Could See the Invisiblest Things"

A man wakes up to discover he's seemingly invisible. He revels in his new power, until he learns he isn't really invisible; everyone is just ignoring him, because he's a marginalized working-class patriarch whom no one respects.

The next day he wakes up and finds, to his surprise, that everything is different: His friends and family love and respect him again. But there's one problem: They can't see him. Because now he really is invisible.

An alcoholic father wakes up in a concrete room with a severe hangover. He recognizes the room as his family's fallout shelter and opens the door. To his astonishment, the world outside is a post-nuclear wasteland. The street is littered with bodies and abandoned cars; all the houses on the block save his are reduced to rubble. He's horrified at first, but then realizes that with everyone dead he can finally drink all the alcohol he wants. 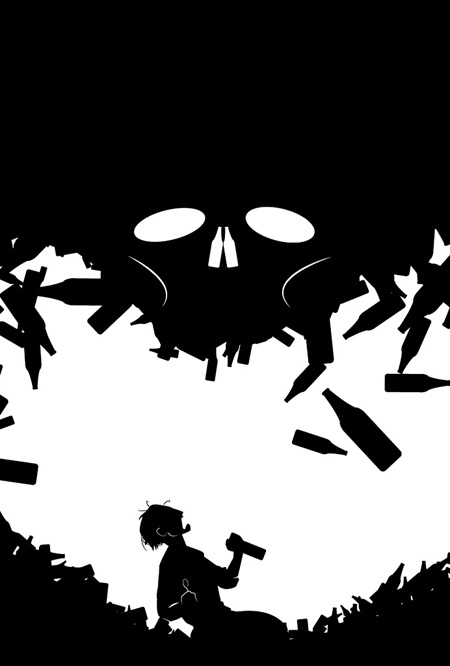 He walks down the street to the liquor store, which miraculously is still intact. He opens the door and sees thousands of unopened bottles. For a moment he thinks he's in heaven, but then it hits him: He doesn't have a bottle opener. "NOO!" he cries. His anguished scream echoes across the wasteland.

A woman finds a paper on her lawn, even though she doesn't have a subscription. She opens it and is nonplussed to discover it's postdated for the following week. A week passes and all the stories in the paper come true. The next morning she finds another paper, also dated the following week. Sensing an opportunity, she makes wagers with her friends over events forecasted in the paper. All of them come true, winning her a large amount of money.

The next week, she searches the lawn for another paper, but finds none. She asks her husband if he's seen the paper and he says that he threw it away. She becomes furious and begins verbally berating him, not knowing that he just lost his job and has been drinking all afternoon.

Shot of a landfill. The camera pans to reveal a crumpled newspaper with the headline "Frustrated Working-Class Husband Beats Wife to Death." Fade out.

Thanks to William "ryorininseven" Cook for the hard-boiled illustrations!