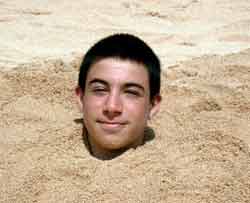 I love sand. Sand sand sand. Doesn't that word just roll off the tongue? If you could make love to a word wouldn't you just love to get sand drunk on yegermiester and take advantage of her for all it's worth? Tell her you are a producer on a big budget film and then not call her anymore once you've fucked her brains out? She calls you back six weeks later asking why you never called her again. You tell her that it was just a one night stand and that she should really stop calling you. She finds your address by doing a reverse lookup on your phone number and you realize she's a crazy bitch and you have to kill her. I know I would. That's why I'm writing about sand. That and Moof told me to. It went kind of like this:

And that's how I saved Christmas. But enough fun time. It's time to get serious and I am serious about sand. But what is sand? I sure as fuck don't know so let's ask Google. Apparently sand is a homosexual band from Europe. I don't know anything else about them except that they are foriegners and I hate foriegners because this is America and I bought an expensive flag with a gold encrusted pole after September 11th and buying expensive things you can't afford is what America is all about. But not South America. All they have over there is spiders and cocaine.

Did Moof really want me to write about these "giant sand" fucks? This just didn't add up so I looked at a better sand website and they said that sand is a substance made up of very tiny rocks and other small pieces of crap. In fact, sand is the hot dog of the geology world. It consists of many different things such as sedimentary rock, used condoms, Mexicans, Free Willy, and former TRL hosts. Let's explore the different types of sand from around the world together shall we? It'll be romantic.

giant sand: These are the fuckfaces we looked at earlier. We hate them and wish they would get off our internet and stop selling poison CDs to schoolchildren.
Composition: Ugly men
Rating: F--

California Beach Sand: California beaches are well-known for their sun and surf, but also HIV-infected syringes. Don't be alarmed. We locals call these prizes, similiar to those you would find in a cereal box.
Composition: The unfulfilled dreams of promising actors and actresses and my inability to understand the left lane law.
Rating: A+++ WOULD SIFT THROUGH AGAIN

East Coast Beach Sand: East coast sand is quite possibly the worst kind of sand in the world. Most kinds of sand are delicious and friendly to the colon. But east coast sand is poison. It doesn't surprise me though, as the entire Atlantic coastline is like one giant skinny turd running up and down the United States.
Composition: Sealed copies of Seaman for the Dreamcast
Rating: D, F, LP

Eye sand: Eye sand is the best kind of sand and can be a little breakfast treat in the morning. But it does have it's downsides. Eye sand is made by the eye because of our body's natural desire to cause pain. If eye sand is not harvested in the morning it attacks the eye and burns because it doesn't pay up on gambling debts. Remember to harvest your eye sand each morning. Eat it or save it for a rainy day.
Composition: Solidified farts.
Rating: Mature

Those are the four main types of sand. I'm sure there are more but they don't pay me to sit around and talk about sand.

Sand is commonly reffered to by people as the tool of the devil. It's no wonder, as millions of people each year are claimed by quicksand pits, sandbags that hang over stages, and beach volleyball matches. But these people were probably child molesters anyway so who cares. So what can you do to stay safe around sand? It's simple folks. Just follow me over here near my collection of firearms and I'll show you. 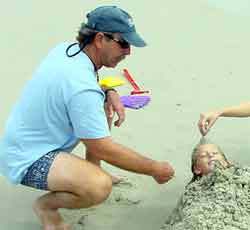 This girl didn't follow the simple sand safety rules and now her father is murdering her. I told you that would happen! BUT YOU DIDN'T LISTEN!!!1. Don't listen to front page writers that ask you to follow them over to their collection of firearms.

4. Don't listen to Moof when he suggests topics to discuss on the front page.

6. Do make your article appear longer than it actually is by utilizing lists, blockquote tags, and paragraph tags to their full extent.

7. Don't get the law involved.

8. Don't shit in sand and not bury it. We aren't animals here.

10. Do steal jokes from The Simpsons. They stole everything on their show from Broadway musicals and old Twilight Zone episodes and it's about time for some payback.

Sand is dangerous but it can be fun as well. Make a game out of it. See how many grains of sand you can count. Then try to break that record. Collect sand. Collect things that are covered with sand such as cat shit, dog shit, and human shit. Trade your sand covered shit with others. The going rate on Wall Street for sand covered dog shit is skyrocketing. Think of it as an investment for your children's future. Make sandballs with your friends and have a sandball fight. Fill your super soaker with sand and surprise your friends, or enemies.

There you have it. Sand is making a comeback and you are either in or out. Those of you who defy sand will regret it. Your lives are forfiet. You will be crushed under the ever growing regime of sand. You cannot stop it. Succumb to sand. All hail sand!

Weekend Web: Honor America By Sitting at the Computer!

Hello internet friends, Zachary "Spokker Jones" Gutierrez still here listening to the gentle whisper of the Fourth of July gunfire extravaganza. Living in Garden Grove, CA affords me a front row seat to the pops, bangs, and OH GOD HELP ME's of the holiday festivities that go on here. That's funny because as I write this it's actually July 3rd. Oh those crazy Mexicans just can't wait. Anyway, we have a great little Weekend Web for you today. It's shorter than usual but still packs quite a wallop. Today we look at Living with Style, also known as the bizzaro Something Awful Forums!

Put your money where you mouth is! Of course, take the cock out first. Have fun!