This Article is About Cat Urine.

WARNING: This article, as you may have guessed, is about cat urine. If you're not a big fan of cat urine or clicked on the link expecting something different, like an article about the National Football League or Greenland or whatever, then you will be disappointed. And if you are a big fan of cat urine, then you've clearly got your own issues to deal with. 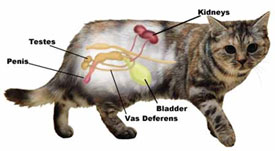 A quick refresher course dubbed "WHERE ALL THE PEE COMES FROM."Cat urine: a substance so vile, it nullifies the existence of any possible benign god. Neither science nor man possess the evil skill required to create a liquid rivaling the sheer wretchedness of such an abominable secretion. Nightmares throughout time have been repeatedly haunted by one eternal recurrence, the unholy specter of cat piss hanging around a pet owner's neck like a methane-filled albatross corpse bolted to their clavicles with rusting industrial rivets.

If you have never experienced the sensation of entering a room polluted by cat urine's revolting stench, you obviously managed to avoid purchasing a cat, an action which you should continue as long as humanly possible. The idea of cat adoption ranks somewhere between "voluntarily requesting a tax audit" and "murdering your entire family." Sure it may initially seem like an incredible, flawless idea, but eventually some minor issues arise, ones which usually end up with somebody either going insane or to prison.

The primary problem inherent to purchasing a cat lies in the simple fact that you're purchasing a cat. Scientists in Norway recently ran studies revealing 99.2% of the human brain completely shuts down when the topic of "cat adoption" arises. The only sections of the brain still able to function are the parts responsible for cursing and reflexively reaching for your wallet. Conspiracy theorists insist footage from the 9/11 terrorist attack clearly shows cat adoption literature flying out of the cockpit during impact.

To understand the madness behind voluntarily purchasing a cat, one must first trace the thought patterns of the human brain, a complex and complicated tool not unlike that floating ball in "Phantasm" which spun around a cemetery and stabbed people in the eyes. The decision is a concretely linear process, one invariably following this line of questioning:

THE THOUGHT PROCESS BEHIND PURCHASING A CAT

Question #1: Is there an emotional void in my life, one which cannot be filled with consumer electronics, frequent trips to the mall, and narcotics? Yes.
Question #2: Does my apartment / dorm / house / cave / religious compound allow us to own dogs? No.
Question #3: Are birds, fish, and hamsters completely gay? Yes.
Question #4: If I buy a pet snake or spider, will my neighbors think I'm a sexual predator? Yes.
Question #5: Has the liberal, Jewish, feline media sufficiently brainwashed me into believing cat ownership can be a fun, rewarding, enjoyable experience, much like voting democrat and burning flags inside Christian churches? Yes.

Cats: for when there are no other viable options! 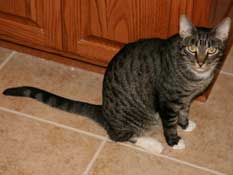 Kit, you are the worst perpetual pissing machine ever.Today's exciting topic comes courtesy of our pet cat "Kit," currently undergoing the obligatory cat metamorphosis from "entertaining, playful kitten" to "annoying, useless money sponge who hates you and everything else in the world." This is a spiritual journey every cat must take, an event occurring between two months and four years into their life.

When we first adopted Kit from the local animal shelter, we once again fell for the media's lies promising an energetic, friendly companion who didn't constantly stare directly into your soul and pray for your demise. Yes, I was sucked in by the same fistful of deception resulting in our first two cats, one who ran away and another who gave himself away after I offered him the option of being murdered if he continued to meow nonstop every morning at 3:00 AM.