The secret bunker of the Time Police shook with the energy unleashed through the Time Matrix and into the distant past. John Madden, clad in his black body glove with the big yellow star on back, went through the last minute checks of his equipment.

"Didja, didja look to see if I had my banana?" Asked Madden. "Last time I got there and I didn't have my banana and let me tell you it was a heck of a time trying to find a banana in 1862. There were watermelons and tomatoes - tomatoes are fruits - and then I managed to talk to Pete Grisham and he found me a cantaloupe but nobody could turn up a banana. I looked high and low, all through Atlanta, and I was looking-"

"John, I brought an extra banana just in case you lose yours this time." Lieutenant Steve Conroy interjected, patting a special banana holster clipped to his belt.

"Oh good thinking, I would hate to have to come back to my bus here in 2004 just for a banana, but I need my niacin."

There was a bright flash of light and the Time Matrix unfolded into a time gate like in "Stargate" but only not so much so as to cause a lawsuit. John Madden and Lieutenant Conroy stepped through the time gate and were whisked back to the year 60,000,000 BC.

Dinosaurs were everywhere and it was crazy. There was a pterodactyl like right above Madden and Conroy and Madden was really excited.

"This is pretty amazing. Reminds me of the time I made the turducken on the grill in '97 and some of the turkey was bad and about halfway through the game I started hallucinating and I thought Bo Jackson was a magical giant condor. That Bo Jackson, he can do anything, I once went to a brunch with him and my feet were covered with corns and after a handshake with him they were gone. I tried to convince him to come massage my wife's breast cancer but Bo knows best. Then I went to the-"

"The uh, the time anomaly is up ahead John, just make sure you don't touch anything." Lieutenant Conroy interrupted.

"Steve, you know I will never fly, and that's because 'a', I'm afraid of going where god never intended, and 'b' the security is just crazy these days. They will touch everything, so be glad that I am here instead of one of those security screeners, that's why I have the bus. It lets me relax and be in comfort, and I mean I have been doing this for almost 500 years so I think I deserve a little bit of comfort."

John Madden started to follow Lieutenant Conroy but then he stepped on the tail of a baby brontosaurus. The baby brontosaurus made a sound like a goat and John Madden got pretty scared thinking he was being bitten by spiders again like last time. He started to run back to the time gate but then he tripped and landed on some baby monkeys. They just sort of crackled underneath him but his fall agitated a nest of giant moths that swarmed out of their hive and started to bite Madden's shirt. This made Madden even more scared so he started smashing them with his hands and then a pack of raptors, that like to eat moths, came running and started licking all of the moth residue off his body. But John Madden had so badly mangled the moths that he had obscured their warning patterning that they are poisonous and the raptors started dying from the poisonous moths.

"Uh oh, this might be trouble!" John Madden exclaimed, but Lieutenant Conroy was already too far away to hear him.

The sounds of the dying raptors brought megahippos that like to scavenge dead dinosaurs and when they saw John Madden all covered with moth dust they thought he was a hippo so one of the female hippos started to have sex with him. John Madden became disoriented and stimulated by the hippo's sexual musk, which allowed him to achieve an orgasm inside the hippo. Then, because things were crazy and different back then, the female hippo gave birth to a centaur-hippo and John Madden began to suddenly lactate, which allowed him to nurse the centaur-hippo to strength.

"I will name you Queenie!" He declared, but then the meggahippos and Queenie had to leave.

John Madden realized he was a mess so he found a pond and took a bath in the pond. There were a lot of lungfish in the pond and John Madden named them as he took his bath. While he was petting one he named "Roger Clinton" he dropped the radiographic element of his home X-ray machine out of his body glove pocket. This began to cause mutations in the lungfish that terrified him so he fled back to the time gate just as Lieutenant Conroy returned from his mission to arrest time criminal Jules Asner.

"Did you manage to stay out of trouble?" Lieutenant Conroy asked John Madden while he was fitting the pain amplifier around Jules Asner's neck.

"Oh, you bet," replied John Madden with a big grin.

Then they went back through the time gate.

Back at the Time Police bunker things had changed while Madden and Lieutenant Conroy were on their mission. The first thing everyone noticed was that it was a lot darker and colder than it had been when they left. The second thing everyone noticed was that giant biomechanical walkers were towering above a landscape made of flesh, pruning swollen gland-trees and draining fluids from hillock sized cysts. The sky was dark and the area around them was lit only by the unearthly luminescence of a drifting sac of gray meat that flashed periodically with greens and blues. The world had fallen into utter despair, and the few people they saw on the wide boulevards of metal and desiccated skin were sallow quadrupeds with drooping and vaguely human faces.

"All father hail to you," one muttered, its tongue lolling out of its frothing mouth and its eyes rolling back in its head.

Several others approached, shuffling towards Madden and his companions.

"The all father has returned to us." The creatures murmured to each other.

"It is glorious!" Moaned one.

"He has returned, as the prophecies foretold, to deliver us from our sins," cried another one that worried long and curled fingernails in its bovine mouth.

"Now wait just a minute." Instructed John Madden. "I don't know what you guys are talking about here, we are supposed to be in the Time Police secret bunker. What are you guys doing here? Did they outsource or something?"

"All father, you confuse us with your riddles." The creatures seemed upset and began to flay the skin on their backs with flails and whips they carried in holsters around the thick trunk of their neck.

"Last week when I was on a mission to 1492 to stop Doctor Magnus from destroying Christopher Columbus's self-esteem by following around and calling him fat I accidentally dropped my cell phone in the toilet at a bar. That caused all of these weird phones to appear back at the Time Police station but Steve, you had some sort of quantum whose-a-majigits that maintained the original what-cha-callsit so we could go back and fix what I did. Then I actually got to meet myself and talk to myself which was pretty crazy, I think, ya know I had no idea I was that big myself. But I say just enjoy life and deal with it, if you've got a big stomach you-"

"Oh, you know, I might have touched a thing or two. I was watching out though, I keep careful track of what I'm doing, got to keep your eye on the ball at all times even if you're sitting on the bench is what I always say. Don't disrupt the flow of the game."

Lieutenant Steve Conroy sighed and hit the gate opening button so that they could return to 60,000,000 BC and stop the other John Madden.

"The time portal should be opening any second." Steve was examining the quantum chronotimewatcher.

"Alright, I will go talk to me, and tell me to just stand perfectly still right by the time gate."

Steve responded by hitting John at the base of his spine with a powerful tranquilizer injection. John slumped to the ground. The time gate began to open with swirling colors and the like and Steven stepped out from behind the bushes. He nodded politely to the duplicate of himself, who rolled his eyes and smiled sadly in response. Then he walked up to John Madden and fired his emergency pistol three times into his face.

Steve dragged the unconscious Madden and the manacled Jules Asner through the time portal and back into the future.

When John Madden woke up it was to a beautiful utopia. The sky was blue, the trees were green, the flowers were in bloom and soft music was playing from everywhere around them. While they were enjoying the scenery Time Police Chief McMurtry walked out of his office in a bright blue suit and approached them and shook their hands.

"Congratulations on the awesome mission guys," he said, pumping their hands up and down. "You guys did really good. Peace!"

A few Time Troopers in pink and green uniforms took custody of Jules Asner and placed her in her own TV show on "E!" entitled "Wild On the Camel Toes on the Riviera". John Madden was knighted by the Queen of England and went on to provide color commentary for Monday Night Complimenting, the sport where two teams face off and see who can say nicer things about the other team. Lieutenant Steve Conroy locked himself in his room and shot himself through the brain.

Coming to a Phriday Near You!

Howdy gang, Livestock here. I'll get straight to the point: it burns when I pee. But more importantly, there is a gullet-smacking new Photoshop Phriday online so go read it right away! Post haste even! The theme the SA Forum Goons toppled this week was "Clash of the Movie Titans," otherwise known as "movie icon face-offs" or "movie character showdowns" or even "shut up and just show the preview already!" 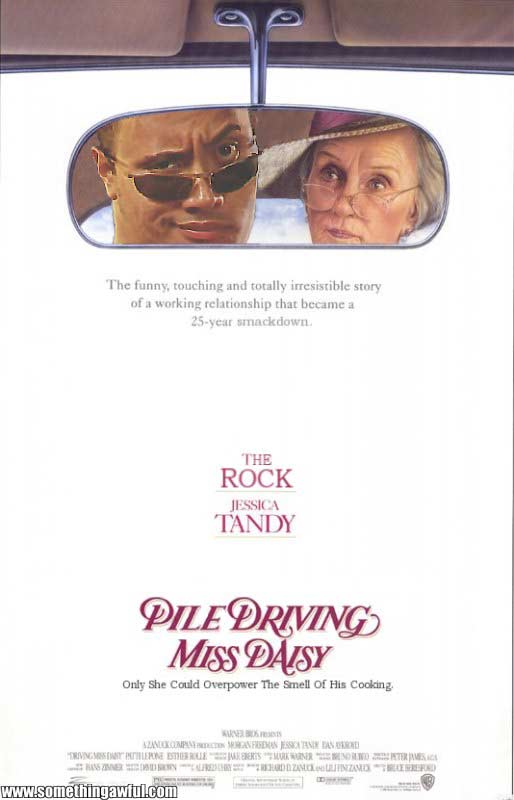 Or "click here right now while you still can!"