We all have our favorite animals. Some people like horses so much that they sit on 'em whenever they get a chance. The most dedicated horse fanatics even quit their jobs and hang out in trees all day, waiting for a horse to mosey on by so they can drop down onto its back and enjoy a good sit. Cats have wisely harnessed the power of the internet, rising in popularity with every terrible meme that they propagate. Several writers on this very site have regaled you with tales of endearingly stupid dogs, racking up armfuls of Pulitzer Prize rejection letters for their efforts. 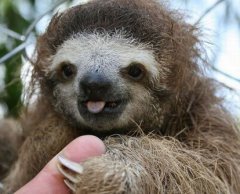 The thing is, most of us are wrong. Our favorite animals are garbage. This is because the sloth exists, and it is the best.

If you have not experienced the pleasure of seeing a sloth, your life is incomplete. The beast itself is essentially an out-of-shape monkey with a weird neck and dumb face. Shaggy Chewbacca-like hair covers its entire body like a bad wig. Its gangly limbs end abruptly in a pair of enormous claws, presumably the result of a galactic evolutionary mixup, leaving a subspecies of unfortunate velociraptors to die out millions of years ago because they were born with chubby padded paws.

The resulting animal is so awkward and pointless that it becomes impossible to dislike. When a person comes across a sloth, they can't help but be amazed that the creature managed to survive in any environment but a padded nursery. That feeling is usually followed by a compulsion to find a protective helmet and strap it tightly to the little doofus' head.

Compare the sloth's appearance to any other animal. For instance, just to pick a random example, the Predator from that movie Predator 2. The Predator has scaly fish skin. Its face is an even scarier version of female genitalia. It has a highly questionable sense of fashion, going out of its way to flaunt full body fishnets and the worst dreadlocks since Jon Favreau starred in PCU. When it comes to looks, the sloth wins, hands down. 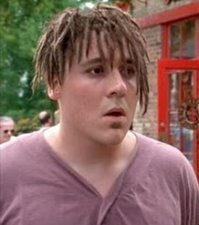 In action, the sloth is really something special to behold. You know the word "dynamic"? That's a word that will never be used to describe the sloth. It mostly just sits there craning its weird little head around on that long neck, seeming to wobble even when it remains perfectly stationary. Still, the animal can hold on to a branch like nobody's business. Maybe it doesn't swing or do much of anything at all once its on that branch, but holding on must take some athleticism.

Once again, let's choose a completely random animal as a point of comparison. A dead pigeon. The dead pigeon can't hold on to a branch. It can't even breathe, though a sloth is surely able respirate any time it feels compelled to do so. Sure, the dead pigeon's feathers can flutter around quite a bit, but that's due to the wind rather than any effort on the part of the dead pigeon. In a matchup of pure physicality, the sloth narrowly comes out ahead.

Of course, looks and physical ability are all but meaningless without intelligence. How does the sloth fare in that department? It certainly smiles a lot. To me, a smile indicates confidence, and confidence can stem from knowledge. Also, the sloth stares at pretty anything. Even the dumbest sloth can stare at a chalkboard full of really advanced scientific theories. I bet it could stare at great works of literature as well, or the world's most difficult math problem.

Compare that to a worm, and it's not even fair. Worms don't have proper brains. They don't have eyes, so they can't glance at a chalkboard full of numbers, much less stare at it.

Name any attribute, and I'll show you a creature that's worse off than the sloth. That is how I know that it's the best animal in the world. Unfortunately, being presented with empirical evidence of the sloth's dominance is one thing, and growing fond of the creature is quite another. People do like to side with underdogs, after all. There is little I can do to convince you if you have already made up your mind.

All I ask is that you visit a sloth in person and give it a chance to win you over. Call or visit your local Apple Store. Schedule an appointment for the Sloth Zone. Trust me, you won't regret it.