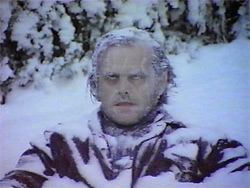 "Blood in, blood out," goes the saying in the brochure given to me by the Chicago board of tourism, but this time of year I am reminded of a different use for blood. Nature, our primordial foe, has once again disrespected the birth of Christ by choosing America's High Holiday to take its pagan blood sacrifice from an unsuspecting population.

Slippery roads have been blamed for at least 21 deaths this week as the storm lumbered across the country from the south-west.

Over this Christmas one million white inches of crystalline death cumulatively pummeled patriots into mangled casseroles of auto junk and brutalized meat. It was a slaughter. On Interstates from Minnesota to Michigan travelers lucky enough to dodge the frosty reaper's ice-sickle were confronted with grisly tableaux of carnage. Roads were glazed with sheets of icy doom, charred wrecks and heaps of the dead filled the ditches, and cars slewed and plummeted into razor-rocked canyons.

Ruptured gasoline tanks and stray sparks produced fireballs that reached a thousand feet into the sky. Black smoke poured from the twisted wreckage of mutilated minivans as the roasted atoms of presents and people joined in a fiery embrace. 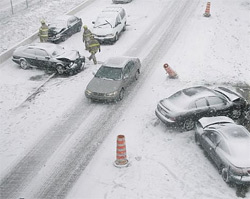 Onlookers were reminded when your fillings are melting into the fire-proof back of a Zhu-Zhu Pet it is the spirit of gift giving, not the value of a gift, that counts the most. As those poor fools burned in their cars the swollen belly of the blizzard was lit crimson by the death pyres according to some news reports I may have embellished slightly to boost attendance at my theater of the mind.

A laughing matter? Perhaps, unless you've seen your gore-clad tot launched headless from the decapitating straps of his car-seat, the jagged glass of your windshield peeling your maimed moppet like so much red banana. Then you won't be laughing, will you? No, not laughing at all, unless you are hysterically laughing while holding your toddler's weepy beef ragdoll body in one hand and his crumpled, chum's worth head in the other as you scream to a god that will not answer you, 'Why!? Why did you do it!? Why did you take my boy!?" Merry Christmas, lesson learned!

Snowdeath. It really is that simple. When you and the family are wearing snowman sweaters and caroling about "White Christmas" around your hot toddy chestnut fire pianos you may as well sing, "Rudolph the Red-handed Thrill Killer" and wear woman-skin suits. You are worshipping death. The weather outside is frightful and there you sickos are glorying in it like some psycho slasher cult, crowded in a backwoods shack, filling bags with trophy scalps you sliced from the heads of your teenage victims.