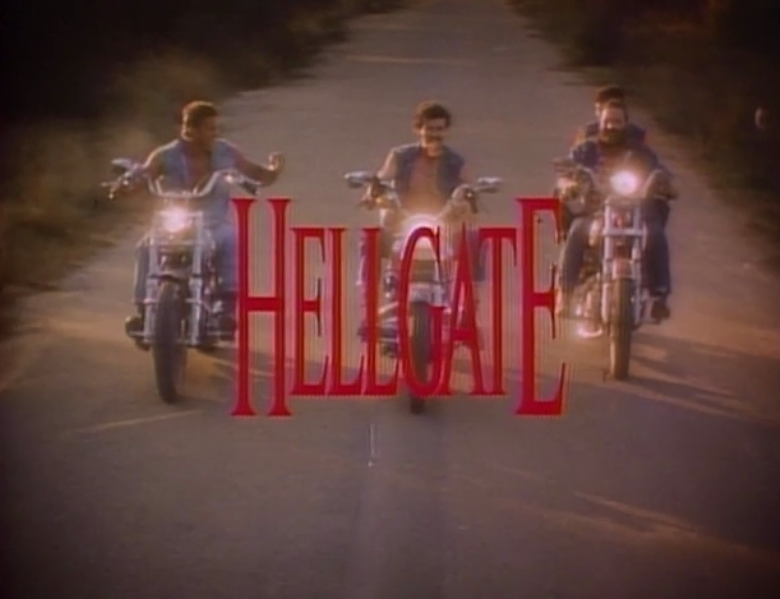 Overview: An insufferable asshole stumbles across the spooky ghost town his dickhead friends happen to be telling ghost stories about and gets them all killed by being an idiot.

The Case For: Not this time, buddy.

The Case Against: Makes Hobgoblins look like it was directed by Alfred Hitchcock with a trillion dollar budget.

Alright children, gather round, gather round. It's time for a spooky story! This is the story of the Hellgate Hitchhiker. It all begins with William A. Levey, director extraordinaire, who decided one day to bring all of his best friends together to make a movie with him! Sure, maybe none of them could act, write, or speak like normal grown ups, but with a handful of magic and a heart full of...this one doo wop song, they set out to prove you don't need any of those things, as long as you're willing to work hard and ignore all the bad negative things bad negative people say like "no," "stop it," and "what is this piece of sh-" well, you get the idea don't you kids? Sometimes all you need to make your dreams come true is a story. Ours starts in the 1950s, which were a magical, wonderful time!

In the '50s, there was a motorcycle club called The Strangers - a motorcycle club, or "gang," is like a group of grownup friends that spend all day riding their bikes around looking for adventures, doesn't that sound fun?

Sometimes they would share their bikes with each other when one of their bikes was in the garage being fixed up all shiny and new or the district judge said they couldn't drive their own bike anymore because they'd been bad and had to learn a lesson, and we know what that's called, don't we kids? That's right, punitive damages! When they got hungry, The Strangers liked to go to their favorite diner for frosty chocolate milkshakes:

One day, a beautiful princess named Josie came into the diner, and the Strangers all fell in love! But the wicked old man who owned the diner got very mad at the strangers and scared them all off with his magic fire wand. So Josie and the Strangers decided to go back to her father's house for cookies. Her father's house was in a very special part of town called Hellgate, which was the best and onliest 1890s ghost town ever! Every day was a carnival and it looked like if Pioneer Village was covered in Christmas lights all year round.

But the Strangers started playing too rough with Josie, and her father King Lucas Carlyle got very angry and came after them with his prize-winning hatchet collection. The oldest boy in the Strangers club tried to fight back, but he got hurt and then had to go move away to his Uncle Ned's house up in Canada :( Josie went with him because she was hurt too, and her father was very sad. He went back to his castle and didn't come out again for a very long time. Sad King Lucas paced around all day, sipping on his sadness potion and looking at a giant glossy picture of a beautiful future girl that definitely wasn't just a blown-up copy of one of the actresses' glamour shots, no sir.

Groundskeeper Larry went inside the magic cave to get some fake plastic treasure because he eats the treasure for food, but a mean bat attacked him so he had to give it a time-out with his shovel. He found a special crystal treasure that made the bat so happy, and he was so excited he forgot all about how hungry he was and ran to tell Lucas all about his amazing adventure.

He showed King Lucas his big blue crystals and explained about his new best friend Mr. Happy Bat, and the king got a great idea from all the thoughts he'd been saving up that this crystal must have amazing powers that make all animals really, really happy and want to be best friends, like good old Turtle Bob:

Turtle Bob liked the happy ray very much, but he got too excited and bit a giant divot out of King Lucas's face, then exploded into little bitty turtle chunks! Poor Turtle Bob. King Lucas spot-welded some sheet metal over his face since he was out of Band-Aids, and brought Josie back as an unholy abomination of the night! Hooray!