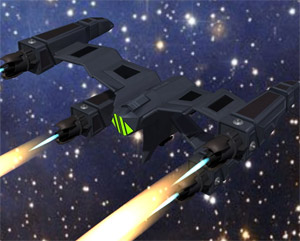 The light attack ship looks like garbage. We had one of our interns make it and he pretty much ripped off some ship from a TV show. This is a superiority fighter and you can put it in the hangars inside the KEW-19 King Wolf fleet carrier. Imagine buying like ten of them for all of your best buds to fly out of your carrier or something. Whatever you want to do. What improbable features are we going to have to promise to get you into this shoddy DLC for an unreleased game? Phantom x-ray beams. Bubble drives. Magnet isotope missile shields. Death boomerang. You don't want to be out in space and not have a death boomerang, do you? 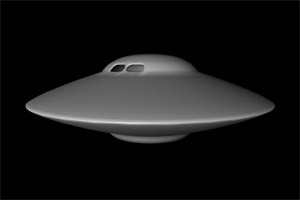 This was a ship that one of our graphic designers used in a birthday video for one of the managers. It was a joke. But we're rendering out just about anything and offering it as a ship, because honestly, we're not leaving any money on the table this time around. Do you want us to make up some stretch goals or something? Okay, if we sell 5,000 of these, we'll get the lady who did the voice of Harley Quinn on the Batman cartoon to record the voice of a sassy robot that will appear in the tutorial for the ship editor which releases in 2017. Good enough? Uh, huh, we'll have mini beer bottles made with your pet's name on the labels and include them rolled up in a cloth map of New Jersey with a fake Olympics medal from the 2874 space Olympics.