Guitar Supermen Are Our Superiors 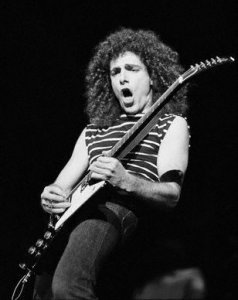 Brannen and I stood in a railed queue that was actually a maze, some paths dead ends, some leading back to the beginning. At the end was the Ticketmaster window. Ticketmaster's name and prices have always appealed to me as a masochist.

"I hope they play their older stuff," Brannen said. "They haven't been as good since their first singer died of karoshi from writing too many perfect songs and living too many of his dreams."

The arena's plexiglass windows were bulging from everyone inside shouting that this was the best night of their lives. It made my reflection look fat, which because I'm bulimic made me want to throw up. I induced vomiting by thinking of how I wanted to be a writer for the asbestos glove fetish blog hotmitts.com, but the only important writing I'd ever do would be changing a few characters in the hundreds of video files of tonight's show.

I remembered the last concert I went to. There'd been a fire and I'd led everyone through the smoke-filled hall to the door (social anxiety gives me a sixth sense for public places' exits). But the people I'd saved ignored me and crowded around the band. Some of the burn victims peeled off pieces of skin for them to autograph.

The arena was full of people, including some 30 and 40-year-olds with phantom youth syndrome smoking nonexistent joints and spooning nonexistent girlfriends. A mosh pit had formed and was dividing like a cell into smaller mosh pits. Despite its violent reputation, moshing is just a release of the crowd's energy, although this actually makes it more dangerous since the energy can electrocute someone. I thought this was happening to Brannen, but he was just having a seizure from the band's light show.

The stage was a Maslow pyramid, with the band at the top and the audience at the base. The singer dove off and crowd surfed in a sort of reverse funeral procession where the person being carried is the only one truly alive. Touching him I felt religious ecstasy and started speaking in tongues and requesting songs that didn't exist. Then I rushed the stage, except it was actually just an image of the stage being recorded on someone's smartphone. The phone's owner tried to attack me, but Brannen beat him to death with the reissue of one of the band's albums - it was really heavy due to its encyclopedic liner notes listing the models, weights and atomic structures of the production equipment. 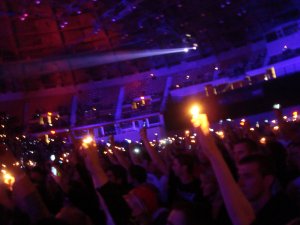 During the final song everyone raised their lighters, despite findings that this is the main cause of global warming.Brannen and I searched for dropped wallets so we could buy concert t-shirts that were wormholes back to tonight's show. I found the band's setlist, which was their most popular song 23 times, with reminders to pick up hookers after the concert. As I took a picture of it so I could sell it on ebay I noticed my phone's battery light was flashing, even though I'd just charged it. I wondered if through some quantum mishap my phone had been replaced with one from an alternate universe. Maybe a universe where I was a rock star, walking through my mansion past the corpses of MTV Cribs cameramen who'd gotten lost filming its interior, not worried about death or pain, which were just tiny dots on a horizon of sex and speedballs.

By the end of the show our ears were ringing. Brannen and I sounded like chipmunks to each other, except chipmunks are rock stars whereas we were just people who paid $50 to stand near rock stars. As the band left the stage I shouted a request for Free Bird out of longing to be free from my boring, unsexy life.