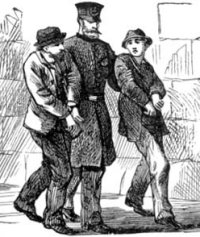 I am usually an apathetic person when it comes to the plights of others. I am content to sit in my underwear eating rocky road ice cream while silently chuckling as the daily news reports the day's death tally from violent crimes. It is not that I am a bad person that delights in the suffering of others, it's just that it doesn't seem very important if it doesn't affect me personally. For years I was convinced that all these stories of brutal murder and rape were just a way for news stations to snag more viewers. My naivete was all but shattered one lonely night last weekend while I was sitting on my couch waiting for Monday to come. It would change the way I looked at crime, and my responsibility to my neighbors.

Around midnight a horrible racket snapped me out of my waking coma, and brought me forthwith to my window out of curiosity. From my third floor vantage point, I could see a young would-be car thief trying to hot-wire an old van that I had not seen move in over a year. I watched with fascination as I saw the crime unfold before my very eyes. It was like watching an episode of COPS, but right on my doorstep instead of inside my TV box. The van's engine was making a horrible noise and the perp could not make the van switch gears to get away with his prize. This futile attempt at thievery went on for quite a while so I made a bag of popcorn and returned to the window.

I had to give credit to the fledgling criminal who still would not give up even after waking up the entire neighborhood in a 5 mile radius with the non-stop roar that sounded like a thousand lawn mowers. After about 10 minutes it finally dawned on me that maybe I should alert the police instead of just sitting there stuffing my face with delicious buttery popcorn. But it was too late for that as the old man that owned the van ran out to stop the thief, and was almost run over when the young criminal put the van in drive and ran off into the woods. The van nearly hit the old man and crashed into the curb, violently shaking before the engine died. The police showed up a few minutes later but Belleville cops are much too husky to run more than 10 yards without falling to the ground and gasping for air. He had escaped, and I couldn't help but feel a little guilty about my lack of action. What if this criminal went on to murder my Uncle Ben, and then I was bitten by a radioactive spider and had to wear multi-colored tights for the rest of my life? I realized that my apathy concerning the plights of others was not only selfish, but a disservice to my neighborhood as well. I wanted to make amends. 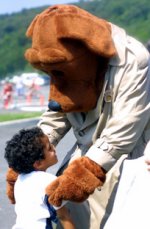 Mcgruff used to be America's top crime fighters, but now he is inactive after catching rabies and tearing this child in half with his superhuman strength.

As a young man I had dreams of becoming an FBI agent just like my hero Fox Mulder from "The X-Files". Not only do you get a gun, you wear a snappy looking suit, and hopefully get teamed up with a hot FBI chick like Gillian Anderson or Jodi Foster. I even went so far as to take their entrance exam and passed the first stage. It was the lie detector test that foiled everything. I was doing alright until they asked if I ever snuck into retirement homes and smothered old people with pillows before, and if I had ever eaten Swedish Fish to excess. After being shut out from the agency, I tried to be a security guard but couldn't make the cut for various reasons. For one thing I'm afraid of the dark and that's when I would be working the most. Also the flashlight you have to carry is really heavy and my upper body strength was not built enough to carry it unless I used both hands. Thus ended my career into the field of justice, and I had retired my spurs to pursue the more gentile path of gold prospecting. I decided to leave law enforcment to the professionals and spent the days panning for gold, with no cares for the troubles of others.

This all changed after witnessing the attempted crime right outside my window that night. I decided that it was time for me to look out for my community and start my own neighborhood watch. Just like Batman, I would stalk crooks in the night, foiling their diabolic plots. The next night, I popped a few Vicodin to stave off my fear of the dark, and started to build my headquarters in large tree that has the best vantage point of the entire neighborhood. This wooden tree fort would serve as my stronghold of justice in the neighborhood so I named it "The Stronghold of Justice, home of the Super Friends". I didn't really have any super friends to keep me company up in the fort, but I brought along my stuffed teddy bear, Lord Cuddlebottoms, who would act as my sidekick until I could find a more suitable one. It took me few days to build the fort from the abundant amount of wood I found behind a neighbor's house next to a sign that said "Don't Take Wood". I also found the tools I needed behind the glass case of the local hardware store that I attained after store hours by removing the glass with a stone and liberating the tools. At last when the fort was done, I was ready to start the neighborhood watch and protect the needy citizens of my block. 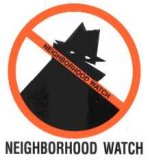 This is the neighborhood watch logo. I think it means "look out for black people" or something.

Neighborhood Watch Log: Night 1
Boring! The first night was totally uneventful and completely devoid of any crime. I just sat there in the Stronghold of Justice in my ninja gear, looking out with my crime binoculars. After the first couple hours of that, I read a Field and Stream magazine and then tried to strike up a conversation with Lord Cuddlebottoms, but he was being a dick so I just ignored him. Around 2 AM it started to get really cold so I climbed down the ladder and went back inside to make a hot pocket. Maybe tomorrow I will have more luck.

Neighborhood Watch Log: Night 2
This got off to an interesting start as I was filling my action bag with rope, flares, throwing stars, and Little Debbie snack cakes. I noticed some birds sitting on the balcony right near my BBQ. One of them suspicously had a twig in its mouth. A flashback of the desicration of my old grill by these birds hit me with horror, and I rushed out to chase them away. Although I wouldn't say that these birds were real criminals, their intent to build a structure on my property was illegal, and I counted it as my first crime stopped in my crime log. With a satisfied grin on my face, I acended to the Stronghold of Justuce.

It was pretty slow once again. I keep a vigilant watch but did not see any crimes being commited or miscreants around the premises. For a little while, I thought about going back inside and watching TV, but I had a duty to fulfill and didn't want to let down my neighborhood. I gave the task of watching the south-west quadrant to Lord Cuddlebottoms as I scanned near the dumpsters for lurking bad guys or CHUDs. After many hours of non-activity, it looked like the neighborhood was safe for now and decided to go back inside. But something was amiss! As I went to decend, I noticed that my ladder was gone! Somebody had stolen it during the night, and I was trapped in the tree fort. I had gotten myself into yet another doozy of a pickle. Fearing that the criminal would return and rough me up, I blew on my crime wistle to wake my neighbors for help. After a few dozen curses from various windows, my shrill whistling finally prompted somebody to call the police. The portly police officers stood under the Stronghold of Justice laughing at my predicament as I explained what had happened, and that the thief is still on the loose with my ladder. They told me that they would have to call the fire department to get me down. Thank god for America's firemen. (9/11 Never Forget).

Unfortunately these firemen turned out to be total assholes and instead of raising a ladder that I could climb down on, they thought it would be funny to knock me out of the tree with their powerful water hoses. I clung to the branches as I was hit from both sides from the heavy jets of water, afraid of the 15 foot fall onto the grass below. Lord Cuddlebottoms was torn from my hands, his head sheared clean off by the powerful water stream. I tumbled from the tree, luckily falling on my head. My vison faded into black as the firemen gave each other high fives and drove off to the bar to down some cold Miller Lites.