The Master; The House at the End of the Street; End of Watch

It was Martin R. "Vargo" Schneider's birthday yesterday, so we got him the gift of being allowed to see Paul Thomas Anderson's The Master. And they say I'm a cruel taskmaster. We also have Sean "Keanu Grieves" Hanson hating The House at the End of the Street and Joseph "Jay Dub" Wade watching End of Watch to the end.

EXPECTATIONS: Let's make a few confessions here. Like most people, I find Scientology to be kinda creepy, but I don't actually know anything about it outside of Tom Cruise, That One South Park Episode and the fact that they like to sue and/or murder people that mess with them. But that doesn't matter, does it? Because this movie is TOTALLY not about Scientology, and TOTALLY not about L. Ron Hubbard. It's also the beginning of fall, which means this is the first Oscar Season Oscar Movie filled with Oscar People. So, no pressure on this movie, or anything. 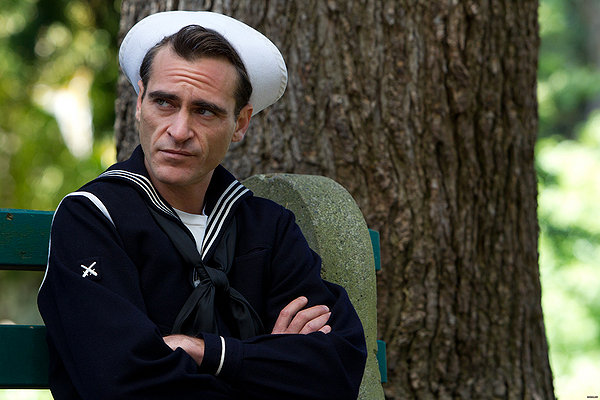 REALITY: The main point movie nerds are making about this movie is that auteur director Paul Thomas Anderson went completely old-school. Yes, he filmed it on 70MM film, which to me seems like a waste, because there's only like five theaters in the world where you can WATCH it on 70MM (Including Friend-of-Current Releases Coolidge Corner Theater in Boston) But I feel the more relevant point to make here is that PTA didn't use any newfangled editing equipment; he had his editors use an actual pair of scissors. This explains every problem I have with The Master. If you gave me three hours of footage and told me I had to cut it by hand, I probably wouldn't do it either.

When we first meet Freddie Quell (Joaquin Phoenix), he is masturbating on a crowded beach after humping a woman made out of sand, and that pretty much sums up everything we need to know. Freddie is a sailor returning from WWII and clearly suffering from PTSD mixed with some good old-fashioned sociopathy, and he has difficulty fitting in to civilian life, and the only reason anyone puts up with him is his talent for making bootleg hooch. Of course, like any poor dealer, he sometimes uses less-than-quality ingredients, like paint thinner. When Freddie poisons a man, he goes on the run and finds himself on board a ship belonging to preacher and author Lancaster Dodd (Phillip Seymour Hoffman). The two men take an immediate liking to each other, and Lancaster begins to treat Freddie's mental illness through the teachings found in his book Dianet... I mean, The Cause. 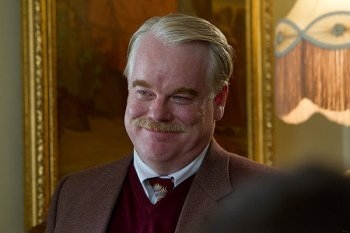 Nice mustache, prick!To be honest, this film is surprisingly fair to Scientology, for a while. The first half presents The Cause as a mixture of past-lives, hypnotherapy, and holistic medication, which aren't horribly unacceptable ideas in modern society. In fact, it leaves it up for debate whether the methods actually help Freddie. If nothing else, he uses Lancaster's words to get laid, so there's that.

Rather than really condemning its analogous subject, The Master instead focuses on the strange bond between Freddie and Lancaster. It's a tale of author and muse, and the relationship is a bizarre one. Is it father-son-like? Is it patient-doctor? Is it gay? ...Actually, yeah, it's gay. It's pretty gay. It's so gay that at one point we literally see Freddie imagining a room full of naked women, and Lancaster's crotch still takes up the entire foreground. Or maybe that's saying more about me than the character.

This is part of the most interesting and frustrating aspects of the film. There are a great deal of shots from Freddie's point of view, and that means that the audience is literally the subject of treatment. You have to realize that you are being tested. This is why I claim that this film has NO reason to be two-and-a-half hours long, but it kinda does. There's a very long stretch in the middle of the film in which absolutely nothing happens, culminating in a ten-minute sequence that is basically just Joaquin Phoenix walking back and forth between a window and a wall. This isn't interesting even if you imagine it set to this. It's masochistic, in a way. This film is somewhat of a slog to get through, because like many PTA films, it doesn't follow typical story-building narrative. But as film people, we stick with it, because it's torturous and still good. It hurts so good, as the famous philosopher Cougar-Mellencamp put it. 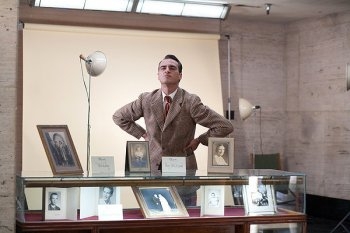 Nice photographs, dickhead!The Master is a very good film, but it is not the work of brilliance we all decided it would be and are pretending that it is. Quite frankly, it's a little bit up its own ass. What no one's talking about is that this film could be just as easily set in 2012; just change WWII to Afghanistan and moonshine to meth. The point of this movie is to prove how easy it is to be taken in by a charismatic, talented person. Phillip Seymour Hoffman is charismatic and talented. PTA is charismatic and talented. Joaquin Phoenix is... well, talented, anyway. (Also, Amy Adams, a woman famous for being wide-eyed and childlike is almost terrifying as a Lady Macbeth-figure.) We are being taken for a ride, intentionally, which is why the film spends so much time doing nothing. It's almost like PTA wanted to see how much we would put up with, but then he betrays his own experiment by making a film that's actually good regardless.

Anderson loves his long shots, and he can tell an entire five-minute story without ever cutting away. Unfortunately, he's also reluctant to cut anything, ever. And it's important that we talk about this flaw, because nerd-worship, especially film-nerd worship, is often driven by a huge hive-mind, and it borders on cultism to begin with. If you don't believe me, go anywhere on the Internet and say the Nolan Batman movies aren't really very good.

PTA knows that there is a division of film-goers who will blindly worship what he does, and so he's almost self-sabotaging what could have been an amazing 100-minute film. Why? To prove a point? Mission accomplished, I guess. Way to go, I kinda hate you.

MINORITY REPORT: Before wandering into your nearest theater to see The Master, there are a few questions you need to ask yourself. Do you find Philip Seymour Hoffman's visage hypnotic? Are you prepared for an overlong, sometimes maddening film experience? Does emotional music have quite an effect on you? - PTA Capacity Analysis questionnaire