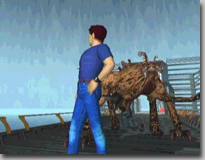 At a Glance: All is not well on spooky Dinosaur Island! As far as I can tell, the research island has been overrun with slow, stupid, boring monsters that carry a change purse wherever they go. You must control your feminine adventurer and explore the entire island, trying to desperately figure out why the puzzles in this game are so painfully banal and repetitive. Oh yeah, and the vending machines in this game charge you more money for a TV dinner than a clip of explosive bullets. What the fuck's up with that?

Companies throughout mankind have attempted to profit from making cheap rip-offs of popular products in order to cash in on a trend. Transformers had Go-Bots. Pokemon has Digimon. Chevrolet has Ford. Keannu Reeves has a large marital aide. No really, he has a large marital aide (which still manages to rival him in sheer acting talent). "Resident Evil" now has "Blue Stinger". 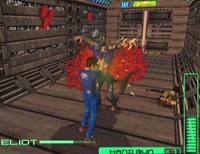 Knock the change outta' the guy! And a few thousand gallons of blood as well.

Much like "Resident Evil", "Blue Stinger" is a third-person view horror / adventure game (at least that's what it was supposed to be) that requires you to perform boring, repetitive actions and ultimately reveal the sinister happenings behind an evil, meglo-maniacal company bent on world domination. I kind of did the same thing when I was working at Gamespy. However, "Blue Stinger" really can't hold a candle to "Resident Evil". How could this game fail so badly?

First of all, the plot is simply lame. Mind you, I'm not claiming the plot in "Resident Evil" was a work of art, but it kept the game going. According to the introduction, a few zillion years ago, a meteor fell and hit the Earth, killing all the dinosaurs and moderately wounding Dick Clark. Later, in the year 2000 (picture a spooky flashlight shining under my face), a huge earthquake rocks Mexico and causes and island to pop up in the Pacific Ocean. Most earthquakes swallow up land; this one actually creates it. 17 years later, a large city and company is built on the island, in the middle of a giant crater. Crater real estate is really expensive, so you know the company that built the complex there was really rich. And evil.

Your character, the blue and effeminate "Eliot", is vacationing on some sort of rescue / large pontoon boat in the ocean. Suddenly, before your poorly animated face can register a look of shock and horror, another meteor falls from the sky and crashes into the island! Again! In the same location! Lightning never strikes twice but dinosaur killing meteors sure seem to. The asteroid sends out some kind of shockwave, encompassing the island and its surroundings in a translucent and impenetrable blue dome. Can you feel the raw terror yet?

This game relies heavily on cut scenes to explain the nonsensical plot "progression", which is simply an excuse to justify new "find the key, open the door" hunts. This might be OK if the animation was halfway decent, if the voices synched with the mouths, or if the storyline wasn't ripped from a grade school kid's creative writing assignment. Characters say such memorable things as "Two girls and a guy? I sense trouble in the near future!" with the same tone of voice you'd use to talk about your irritable bowel problems. The animation in these cutscenes ranges from "simply atrocious" to "remarkably embarrassing". Climax Graphics Studios' modelers must consist of a couple drunk Japanese men, trapped in a dark room, who have never seen a human being before. The characters constantly twitch, gyrate, shake, and lean for no readily apparent reason while rolling their heads and throwing their arms all over the place. Maybe the requisite to get onto Dinosaur Island includes a crippling heroin addiction. The same could be said of employment at Climax Graphics Studios. 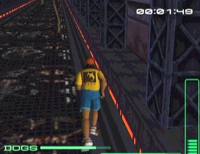 Hurry up and run, the winner of the race gets a small Hassy!

So you run around, beat up braindead monsters that try to block your way, take the random "Mario-esque" coins they drop all over the place (all the monsters must have come from the ATM machine), find keys, and buy things from vending machines. Speaking of vending machines, they provide you with everything, from clips of ammunition to cola and T-shirts. The Japanese must have a different value system than the rest of the world, as the vending machine charges twice as much for a hot dog than a clip of bullets. You can also purchase a mysterious soft drink called "Hassy", which comes in either large or small. Both have the magical ability to restore at least 30% of your health. That's one hell of a drink. I always got a kick out of seeing Eliot limp around, incredibly damaged and bloody, and then drink a small Hassy, restoring him back to full health! If you're some kind of idiot, you could buy food (which costs a lot more and heals you less) and watch Eliot bring the food up to his mouth and... toss it right over his shoulder! Nope, he doesn't even eat it, he just throws it away. Somehow you still get health for this, so I guess it's all good.

"Blue Stinger" is tedious. It's dull. It provides limited entertainment, assuming you're only laughing at it. If you like "Resident Evil", wait for it to come to Dreamcast. If you like painfully monotonous games with terrible animation and storyline, get "Blue Stinger". No, on second thought, don't. Go take a dip in some industrial solvents. If you get too injured, just drink a small Hassy.