Welcome To The Takedown Area

No one is safe within the boundaries of the Takedown Area. If you draw my ire, watch out! You're about to get TAKEN DOWN on the INTERNET. 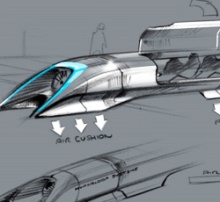 Hey, Elon Musk! Your name sounds like a ghostbuster. Your ghostbuster super power would be coming up with bad ideas and being a billionaire. So you dreamed up a thing called the Hyperloop, huh? Well I have another name for it, and it starts with Hyper but ends in a different word than loop. That's right, I call your idea the Hyperbad.

Forgive me for pressing the assault while you're reeling from that devastating blow, but you're in the Takedown Area and things are about to get even more brutal. There is no escape. The only escape is to leave.

You had one of your employees draw a space train for you, then you claimed that it could go 800 miles per hour. Well guess what? I can draw a horse (the knees might point the wrong way, I can never remember how they go) and claim that it can travel at over 900 miles an hour. Two can play at this game, Elon. Only one can win. That means your odds are 1 in 2 at best.

Take your Hyperloop and jump out a Hyperwindow, pal!

You guys are looking like some real grade A dummies. If you don't knock it off you're in danger of becoming grade A doofuses.

Your country is pretty bad. I couldn't find it on a map. Even if the map was clearly labeled, I'd have a difficult time because basic geography confuses me to no end. I would try to spot Russia by its outline, but I'm not familiar with the shape that most resembles homophobia.

What the heck, Blackberry? You guys have no idea what's going on or what a company is or why you all showed up at the same building wearing suits, and now you're just giving up.

Uhhh there's a thing called Kickstarter. You should have done one. It's pretty much the fastest way to get a bunch of free money. How did no one on your team of overpaid executives come up with that? I thought of it, and I'm no executive. In fact, I don't have a promising career at all, or a happy life, or a meaningful relationship with anything but regret over dumb internet jokes I've written in the past. My life is terrible! Man, I can't believe you guys got outwitted by me. What a dumb company.

Hey, Kendrick Lamar! In a rap song you claimed that you are better than other hip-hop men. Boasting and hyperbolic self-promotion are shameful acts which have no place in rap music. You are a disgrace. This infraction is so serious that I have filed a formal complaint to Yo MTV Raps.

Microsoft! You have fucked up in so many ways that I don't even want to make fun of you. It's not sporting. I'm the Predator, scanning for potential threats on the infrared Takedown spectrum, and you're a baby - a baby without a gun. Not worth my time. Come back to me when you're a threat to anyone but yourself and we'll talk.

Hey, Obama mask-wearing rodeo clown guy! You think it's cool to put on a mask of the president and get chased by bulls? I've got a mask for you. It's a mask of your face with a broken nose. From when I PUNCHED IT. In the nose.

Did you ever think that the bull might be chasing you because you're a jerk? I spent an entire afternoon thinking about it. To be honest, I'm not entirely convinced that's why it's chasing you. Verifying that theory would be very difficult, too. It's worth keeping in mind.

Maybe you should go back to clown college. Oh, that's right, you already graduated!