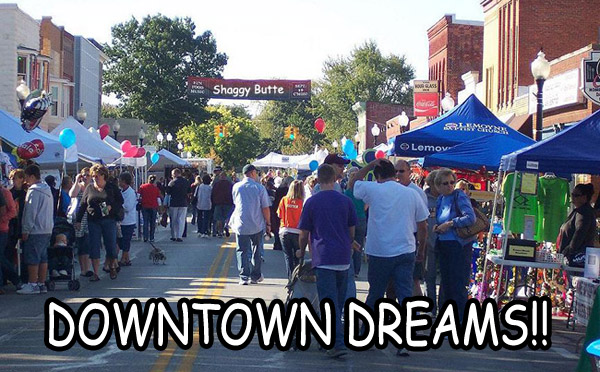 It's almost that time of year again, Shaggy Butters: the 19th annual Downtown Dreams Festival will be taking over the Shaggy Butte Plaza from Friday, March 2nd through Sunday, March 4th! As always, we've got a stellar schedule of fine art, food, local vendors, rock music and fun. Best of all, we've got the best lineup of big-ticket headliners Downtown Dreams has ever seen. Get ready to laugh, dance, eat, cry and learn!

Shaggy Butte's own Albert Bailey has been touring his cat attraction worldwide since 1913, but now he's back for a rare hometown show! "With Thomas Edison's miraculous and invigorating DIRECT CURRENT electricity, these tuneful felines are joyfully stimulated to song! They holler out the popular hits of yesterday and today before falling into a blissful, electrocuted slumber!"
Think your pussycat has what it takes to be a star? Albert Bailey is looking for a kitty understudy! "My lead soprano grows increasingly sluggish with each performance, requiring larger and larger jolts of miraculous and invigorating DIRECT CURRENT electricity to hit the right notes. If your cat has an attractive yowl, please bring it in for an audition! Remember: for safety, I use only the most trusted DIRECT CURRENT electricity to stimulate your cat."

SATURDAY AT NOON: WITNESS THE UNVEILING OF OUR GREATEST TREASURE OF PUBLIC ART

They were words that rang out across the free world: "In Shaggy Butte, mechanic Rick Daisey works 60 hours a week in his shop, but still has trouble putting food on the table for his kids." With this statement, in a 2008 campaign speech in Milwaukee, the then-future president Barack Obama brought national attention to our humble hometown.
The words were a local sensation, and even the Shaggy Butte Republican Party-- the only organized political party in town-- wholeheartedly endorsed Obama. "Shaggy Butte Republicans wanted a candidate who understood the working man," says treasurer Dale Holmstadt. "Barack Obama was that candidate in 2008. He understood us out loud, by name."
Now, those words will be immortalized in bronze by local artist Maxine Beard. At noon on March 3rd, we invite all of Shaggy Butte to witness the unveiling of "Words of Hope and Freedom," a life-sized statue of President Barack Obama, inside a life-sized television set, saying the words "In Shaggy Butte..." in a life-sized speech bubble. On hand for the unveiling will be the entire local government of Shaggy Butte, the artist herself, and a very special guest: "Rocky" Biden, adult nephew of our Vice President!
The statue will be dedicated to the memory of Rick Daisey's children.

SATURDAY AT 3PM: MEET THE MAN WHO MET THE MONKEES

In 1969, Shaggy Butte son Carl Dearborn met legendary TV rockers The Monkees, and now he's ready to tell the tale with a fun-filled evening of rock reminiscence! "For more than forty minutes, I was in the presence of greatness," Dearborn recollects. "I met Davey, Peter and Mickey, and we talked a little bit, and I asked them what it was like to be in The Monkees. Michael Nesmith was in the bathroom, but he talked through the door." You can ask Carl anything about his moments with The Monkees-- he'll hold nothing back in this celeb tell-all extravaganza!
Please note: Carl would prefer not to answer any questions related to Michael Nesmith's time in the bathroom.

SATURDAY AT 9PM: SCREAM ALL NIGHT WITH THE SHAGGY BUTTE ROCK AND ROLL ALL-STARS

Shaggy Butte is a legendary beacon of the rock music scene. Over the years, we've hostednational touring acts like Mudvayne, Kenny Rogers and even Grammy nominee Lou Bega (twice!). We've also produced plenty of home-grown talent, and we'll be putting it on full display this Saturday night, when four local music luminaries and a special out-of-town guest unite to form a one-time-only ROCK SUPERGROUP of extravagant proportions! And now, your very first peek at the extraordinary ineup:
On lead vocals: Most of us know Shaggy Butte as the Fictional Birthplace of Chris Isaak(TM), as stated on the Showtime original series The Chris Isaak Show... but it's also the REAL birthplace of America's most beloved fictional Chris Isaak! Local boy Gordon "Kris Isaac" Poothe has toured the nation's clubs with his rockin' tribute act, but now the pompadour's come home to roost.
On backing vocals: nationally-recognized 2003 American Idol auditionee Jennifer Planks! She may not have picked up a golden ticket to Hollywood, but she got something even better: a one-way bus ticket back to Shaggy Butte, where her true talents can be appreciated!
On guitar: None other than "Rocky" Biden, legendary adult nephew of Vice President Joe Biden! Not only is "Rocky" one of the nation's most well-regarded political adult nephews, he's also a master of shredding out the licks-- he's shared the stage with Boz Skaggs, pop-rock legend Jimmy Ray, and a combined plurality of the Doobie Brothers. Note: parents fear not, we've asked "Rocky" Biden to place stickers over the nipples and genitals of his world-famous "Slutocaster" guitar.
On bass guitar: Heavy metal legend and Shaggy Butte bass hero Lord Gnashtooth of the acclaimed black metal outfit Gutgorger! "Hell on earth awaits all who stand before my bowel-rending bass horror," enthuses Gnashtooth.
On drums and harmonizing vocals: Shaggy Butte is a town known for its healthy dog culture, so no local supergroup would be complete without a musical pooch! You've seen him every Saturday night on his cable access program, "Dogbeat," and now you can witness his phenomenal talent in person: Arf Garfunkel, the Musical Dog! Watch this amazing canine expertly paw at a full 360-degree Neil Peart-style drum kit-- you won't believe your eyes or your ears!

SUNDAY AT 2PM: PIG OUT AT THE KRUT-5 ROCKIN' RIB ROLL FOR RENGSTORFF SYNDROME RESEARCH

Better save your appetite for Sunday afternoon, because the 13th annual Rockin' Rib Roll Rock and Roll Rib Eating Contest for Rengstorff Syndrome Research is going to put your guts to the limit! KRUT-5 TV is proud to present this spectacular sauce-dripping bacchanal of culinary excess, emceed by local star Billy the Lunatic from KRUT Rock Radio 96.3-- and, of course, all the meaty proceeds go directly to Rengstorff research!
"Batten down your bibs, butterballs and blubberbutts, cause Billy the Lunatic is going to stuff you with more ribs that you can handle," says Billy the Lunatic. "Billy the Lunatic fears no consequences! I will stuff you until you are injured with meat! Ribs galore await the mouths of the brave-- help us find a cure for Rengstorff Syndrome and have a rib-rockin' great time in the process! Wahoo! Billy away!"
As if racks upon racks of delicious BBQ ribs weren't enough, we'll also have some very, very special guests cheering the contestants on! As we all know, due to the abandoned chemical plant melting through the ground and falling into our water table, Rengstorff Syndrome disproportionally affects children in Shaggy Butte, with over 1,200 cases per 10,000 live births. Help these brave little kids have an awesome time-- they'll be down in the rib gallery, staring up with their characteristic eyeless faces, their translucent skin stretched drum-tight over knobby-boned skulls, their long, skeletal fingers grasping at what they cannot see, their famous hollow, ghostly wails echoing through the plaza. Let's hear it for our Rengstorff buddies... there WILL be a cure!
Sign up soon, because spots are limited!