Blue Stripe - The Life and Times of a Predator Blacksmith 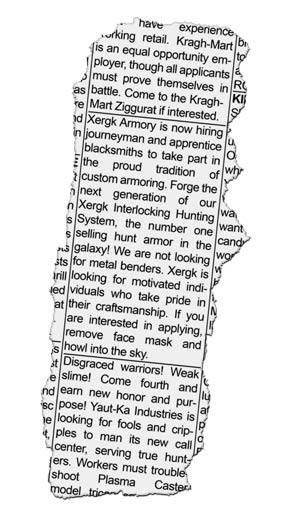 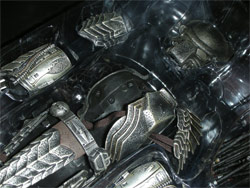 They may take my work for granted, but they depend upon a good armorer.The name is L’yle and I’m a journeyman armorer with Xergk Armory. I craft custom armors for hunters.

Hey, man, I know what you’re going to say. Just stop right there.

Not every jehdin can hunt 24/7 like a regular Te’d Nu’gent. Some of us have grown up and we don’t have millions of zlork beads to expend on hunting expeditions to earth. We may want to hunt, we may even be good at it, but we just don’t have the time and the cash to be able to do it. If that makes me dishonorable then go ahead and stamp me dishonorable.

That is a joke, human. If you have a dishonorable stamp and you so much as roll it in the ink I will drive wrist blades into your eye sockets.

Look at it this way, human: if every predator hunted all the time where would we get spaceships and interlocking body armor systems and atomic self-destruct devices? Answer me that, big shot. The correct answer is that nobody would be making that stuff, other than the females, and everything would go to crap.

So you can give me a hard time about honor and pride and all that baloney, but I know I’m doing good work here at Xergk Armory. You humans should know about that contributing to the good of society thing. You creatures are like the masters of each individual doing their own thing to contribute to society and making your whole species better.

Hunters of the Yautja call you humans soft meat, the most dangerous of the meats because it is smart and adaptable. Hunters also pursue hard meat, which you humans should know as the alien xenomorphs with acid for blood. These are very formidable creatures and also fairly stupid. If you dig a hole and fill it with sharp traps and then put a blanket over that hole, at least one of them will fall inside.

There is other prey as well. Medium meat is a big humanoid beetle, but it’s soft inside and it is somewhat smart. There is little honor in killing medium meat, for while it is large and strong it is also very depressive and will often just weep and let a hunter dispatch it. There is also rubber meat, very hard to kill because it is so resilient and has few vital organs, but very easy to outwit because the only thing this creature wants to do is chase balls. Baby hunters are sometimes trained on hunting rubber meat for safety reasons.

By the way, that is a new development in this politically correct galaxy we are living in. Give me the good old days when we would drop a juvenile in a pit of starved predatory cats. If it survives then it is ready for the big hunt.

The liberal media is to blame for weakening the minds of our noble race. It is slowly making us too soft and weak like the humans we pursue for sport. 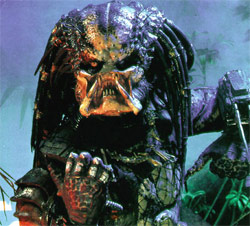 You shall pry my plasma caster from my self-destructing hands, fool!I hear from Se’an H’anni’ty that some of these anti-hunter weaklings want to take away our plasma casters because the United Tribes say so. Please. Are we not yautja, the hunter of the void? We require our plasma casters for the hunt and to protect our space yurts. What if humans come into our homes at night and attempt to copulate with our females? Disgusting!

But do not go getting me started on that subject; I can roar your tympanic membranes off about caster control. I mean, it is right there in the founding tablets of the great tribes. It follows directly after the right to roar whenever you please. Do you know who also got rid of casters? The Na’Ttzi tribe. Place that in your herba pipe and toke on it.

I apologize for getting off track there. I do not often find myself in a position to apologize to a human, yet here I am. It brings shame on my clan.

For your little soft meatling story you wished to know about the work I do as an armorer. I cannot reveal trade secrets, of course, but I would be glad to tell you about my profession. These days I mostly do my work from the combat forge on Hephaestus III, but for more than a century I was a traveling armorer. These are the more interesting of my stories, for I was nearer to the hunt, but I will share both experiences with you if that is what you desire.