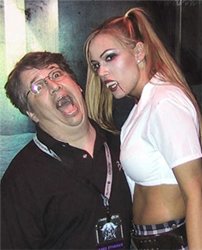 How I feel about E3. Well, minus the vampire.It's that time of year again. Time for video game programmers to comb their neckbeards, find a new rubber band for their ponytail, and maybe even do a load of laundry. It's time for MMORPG guild leaders to leave their subterranean lairs, prepare a detailed list of Rogue-Warrior-Elf-Ranger balancing flaws, and ask mom to pack them a suitcase. It's time for video game journalists to inject themselves with whatever drugs they can get their hands on and seriously, seriously contemplate suicide.

Every May, hordes of nerds, geeks, weirdos, dorks, nuts, and other socially challenged mostly-male humans descend upon Los Angeles for the annual Electronic Entertainment Expo. E3 isn't open to the public and bills itself as an "industry-only trade show," but their definition of "industry professional" is rather loose: if you operate a cash register, you can get in. If you know somebody who once worked on a video game, you can get in. If you run a GeoCities site dedicated to non-consensual Pokemon erotic fan fiction, you can get in. And even if you're not clever enough to figure out how to get a legitimate pass, you can just sneak in.

The result is a loud, obnoxious, crowded, flashy, overblown, horrific spectacle that literally makes me physically ill. I was actually looking forward to my first day of E3 about five years back, but by the end of the day I was passed out behind a booth with a throbbing headache (courtesy of the continuous loops of bad techno music) and a sudden urge to switch careers.

Here are the three most annoying things about E3: 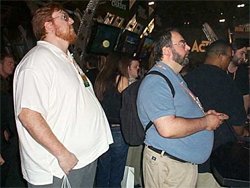 This picture is from Lowtax's E3 2001 report, but it's still perfectly relevant.

I'm proud to say I'm a huge nerd. In fact -- unless we're measuring by weight -- I'm probably a bigger nerd than you. I like other nerds and I enjoy spending time with small groups of them. I don't like spending time with tens of thousands of them all at once.

Here's a bad analogy: think of your favorite song. Now imagine if somebody glued headphones onto your ears and looped that song into them for three days straight at 180 decibels. That's E3. It's nerd overload.

When large amounts of nerds get together, awkward things happen and people end up with phlegm in their face. Here's an audio demonstration of what 48% of all conversations at E3 sound like.

Every year, marketing people think very hard for about ten minutes, trying to figure out how to get people to visit their E3 booth. After eliminating all the ideas that involve doing something original or creative, they all end up coming back to the old, reliable standby: boobs. 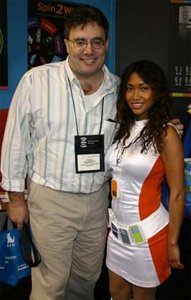 On paper, hiring booth babes to get people to pay attention to your stupid product seems like a great idea. Since the majority of E3 attendees rarely see females who aren't compressed into .JPEG format, an attractive woman or fourteen will certainly make them "stand up" and take notice. The problem is that nearly every single booth has booth babes. Maybe I don't understand this since I don't know much about marketing, but how does doing something that everybody else is already doing help make you unique?

In some ways, I feel sorry for booth babes. Sure, they get paid pretty good money just to stand around, look pretty, pretend to laugh at things, and have no talent other than good genetics and the ability to hold a fake smile... but they also have to put up with Lord Vondermort of the IcEStOn3 KilLAhZ Clan slowly kneading his sweaty, greasy palms into their thighs while waiting for what seems like an eternity for Vondermort's giggling friend to snap a souvenir photograph of their compulsory encounter. For some people, getting their picture taken with a booth babe counts as a date. Ughhh.

This is the main focus of E3, but every year is just like the last: companies try to puff up their game or system as being the best thing ever with slick demos, well-edited trailers, and lavish presentations. The vast, vast majority of these products of course end up being... average, mediocre, forgettable. Every five E3's, they announce new consoles and games with slightly better graphics.

It's the same thing every single year and if you go to a couple they all just blur together into one bad memory. Even when I still liked playing video games, I didn't like E3.

During the past few years I've managed to avoid attending the show or only staying for half of the first day. But this year I'm not so lucky. If you're going, maybe I'll see you there... I'll be passed out in a corner, holding my throbbing misshaped head and weeping.

Ugh, I have to write this crap too? Fine, here.