Triumph of the Thetans

As luck would have it, I recently came into possession of an exciting DVD entitled "This is Scientology." Naturally, this got me all worked up in a tizzy, because I am an avid fan of Scientology media as well as crazy cults in general. If David Koresh had made a DVD before his compound burned down, I would be excited to watch it too. As is, I watched the entire 80-day standoff on TV and relished every ridiculous moment of it. Some might take a stodgier look at cults, but I find them hilarious. Where else can you find people willing to die because an insane bald man said a comet is going to take them to heaven? True, when the poison Kool-Aid and gasoline start to spread things turn tragic, but the wild ride toward certain disaster is quite exhilarating to observe from the sidelines.

This holy DVD, subtitled "An Overview of the World's Fastest Growing Religion," promises to give an "exclusive briefing" by "Mr. David Miscavige" at the "Religious Technology Center." I'm pretty sure I missed some kind of global memo, because last I heard Scientology wasn't so much a religion as a "philosophy," and only in the loose sense that taking lots of drugs and trying to convince your buddies that 5th dimensional aliens showed you the ultimate burrito recipe is a philosophy. But, since it is a religion now and not just something celebrities do in their spare time, I guess I should treat the whole thing as being THAT MUCH MORE SCARY.

Religious technology is also an interesting concept to me, and possibly you as well, dear reader. Whereas traditional churches utilize primitive elemental technology, such as holy water and boxes of magic Jesus crackers, Scientologists have an arsenal of futuristic devices, including e-meters, mind control lasers, and a large anatomically correct robotic replica of L. Ron Hubbard that they are saving for a very special occasion (Tom Cruise's 50th birthday). The entire concept of a Religious Technology Center sounds foreign to me, but then we must remember that Scientology is a religion founded by a guy who used to write about space aliens invading earth. In the battlefield of religion, Scientology definitely has a keen eye trained on the world of tomorrow.

"This is Scientology" is quite fancy, with high quality packaging and graphics, scene menus, and multiple language support. But one would expect such niceties from a professional and respectable organization that is definitely in no way, shape, or form a greedy cult. What sets Scientology and this DVD apart from most cults are the outstanding production values. The typical cult recruitment video suffers from horrible budget constraints. At best you have some guy in a suit purchased at Goodwill preaching to a scarcely populated audience of family members inside a dilapidated gymnasium. The camera work is spotty, the audio is distorted, and the lightning is all a joke. I guess one would define those types of videos as being "indie," while Scientology is clearly "mainstream" and "sold out." 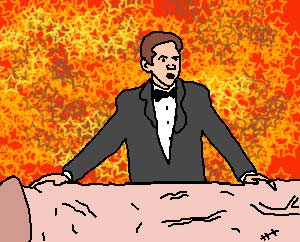 Grand Moff Miscavige, as illustrated by David Thorpe Sadly, "This is Scientology" is not an exciting movie, nor is it a documentary. Rather, it is a speech given by the aforementioned Baron von Miscavige "at the occasion of 35th anniversary of the Church of Scientology Celebrity Center." Sir David Miscavige, who, for all intents and purposes, is an extremely weaselly man. Lord Miscavige spends the entire speech looking and sounding angry and contemptuous, preaching on the ills of modern society, which of course only Scientology can fix. The ills, which he calls "the real Four Horsemen of the Apocalypse," are drugs, crime, illiteracy, and immorality. I would add in a fifth Horseman, that being "people who take too long at the buffet table, blocking you from getting the roast beef," but that is just me. His tone, demeanor, and speaking style is so menacing that I have to wonder if he is trying to sound appealing to people or to inspire a violent, nationalist uprising.

It does not take long for Captain Lou Miscavige to place all the blame for most everything on drugs. Illiteracy, for example, wouldn't be such a problem if schools weren't requiring that children be drugged before attending. Obviously, common social and mental disorders are fabricated to sell more drugs and fuel the Great Psychiatry Trust in its demonic pursuit of profit. While I wouldn't disagree that there are a lot of misdiagnosed patients out there and a lot of corruption in the pharmaceuticals industry, I sure as hell would disagree that we can simply eliminate prescription drugs altogether. We'd end up with a lot of crazies running wild, tearing shit up left and right. True, that would be really fucking entertaining for the first few days, but it would get old and scary shortly thereafter and we'd all want the drugs back.

Submarine Commander Miscavige is also quick to tout Scientology's success in battling drug addiction by addressing its root causes. Well, when you consider that such causes might include a bad family life and poor upbringing, a lack of proper social support and so on, replacing drugs with the embrace of a religious cult doesn't sound so implausible. Hell, in our modern age, people are able to replace drugs with video games and Internet forums and go at them with the same manic, stab-you-for-a-fix enthusiasm. 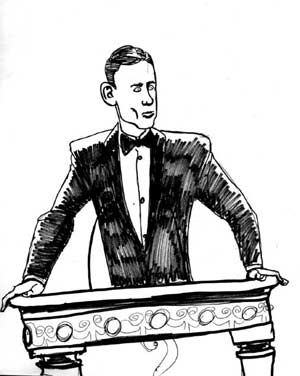 CEO Miscavige, as illustrated by Flying-Chip Getting back to those high production values, The Honorable Mr. David Miscavige gives his speech on an elaborate stage dwarfed by an even more elaborate set. Most churches are not even this gaudy. The set, with large golden columns, bright strings of light, and ornate carvings, looks like some kind of demented amalgamation of a fascist convention and the Academy Awards, with perhaps even a bit of Heaven thrown in the mix for good flavor. I realize Scientology is a very "Hollywood" religion, but they sure went all out. They could easily have hosted an awards ceremony with the same set, giving off trophies for "Most Celebrities Brainwashed" or "Outstanding Performance in an Audit." The giant picture of L. Ron Hubbard is also quite fetching, because he looks more like everybody's creepy uncle than a religious figure. Again, an indie cult would never be able to pull this off.

Rear Admiral Miscavige is quick to defend Hubbard, for where would he be without such a luminous figure to guide him through the darkness of life? Rather than letting Hubbard's career writing stories about aliens impregnating humans (or whatever the hell he wrote about) be a negative, he twists it into a positive. For you see, Hubbard merely used his lucrative writing career to fund his "serious research" into how Xenu, Galactic Overlord, piled up billions of ancient humans at the base of a volcano and then erupted it with hydrogen bombs. Did I mention L. Ron Hubbard changed the world by becoming the youngest Eagle Scout in history at the age of 13? When you think about it, he sure did a lot more with his life than Christ. His idea of a merit badge was getting crucified.

All and all, I would say this was a disappointing DVD from the Church of Scientology. For one thing, it completely failed to even remotely brainwash me. The choice in Secret Agent David Miscavige as host was poor, since he is an antagonistic, ferret-like man. He seems more like an archetypical bad guy, a stock actor you get to play Joseph Goebbels in your low-budget Nazi shoot 'em up movie. I had high expectations for this video and none of them were met. If this DVD was nothing but two hours of a black and white spiral spinning around with a soothing voice whispering "You will enjoy 'Battlefield: Earth,' you will give us your money" I would have enjoyed it immensely. Scientology is too busy hiding Hubbard's bizarre teachings behind forceful propaganda these days, and that is a real shame.

Stop on by for a free Moon Pie! That's right, A FREE MOON PIE!!