Back in 2001, Mac Lethal set off the crowd at the Scribble Jam freestyle battle by sizing up an imposing opponent and rapping "you look like Roseanne Barr covered in tar." If that's the kind of shit he says to people's faces, I figured he'd have no problem insulting bands of his choosing on the Internet. Ladies and gentlemen, here's this week's guest columnist, the 2002 Scribble Jam champ/Black Clover recording artist Mac motherfucking Lethal. 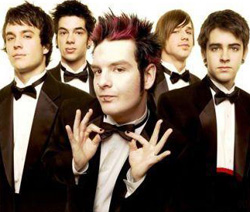 I never actually listened to Senses Fail until the melee I am about to speak on happened. These Warcraft champions were on tour with Brokencyde, and their lead crooner Buddy [Your last name doesn't fucking matter when your first name is Buddy] would hurl out disparaging remarks about Brokencyde every night. He invited them on stage to fight and trashed their music, calling it "passionless," "talentless," "horseshit," etc.

The only problem with their anti-Brokencyde campaign is that their music is WORSE than Brokencyde's. Their songs remind me of watching the two weakest kids in elementary school fighting over the second-to-last-place slot in playground dominance: Scratching, closefisted slapping, biting, saying things like "Ouch, don't twist my arm, bonerface, I have a heart condition!" No blood, no bruises, just weird hisses and awkward wrestling moves.

Rumor has it Buddy got choked-out up against a wall by Brokencyde's bus driver. Bahahaha.

I spent almost $150 on two tickets to see this guy perform in Kansas City three months ago. He released two of my favorite comedy albums of all time (Shut Up, You Fucking Baby! and It's Not Funny), so the thought of watching him do brand new, exciting and fresh material, five minutes from my house, reigned supreme.

The problem was that he plowed through a bunch of half-baked rants, drunken antics, and lame, bullshit jokes that you can hear on every single bootleg CD that has surfaced of him live, from the past 5-6 years. The least he could do is not perform stuff that gets illegally bootlegged, especially if he has no idea we've already heard it. He is also 40+ and dates Amber Tamblyn. When he was 20, she was 6. When he was 6, she was -14. 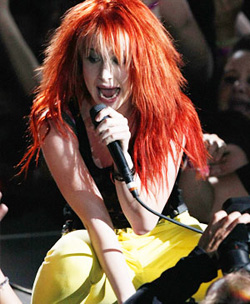 I was in one of my four cars the other night, driving around with a gigantic blunt. In fact, this blunt was the size of a Lhasa Apso puppy. My car was full of knuckleheads in khaki suits and Chuck Taylors. The homie Adef (from Soulcrate Music) yells to the front of the car "Turn that Paramore Live in Chicago album on." So we did. We were feeling it for the first 25-30 minutes. It's very reminiscent of old Long Beach gangster funk (Nate Dogg, Warren G etc.) We loved it, until this Hayley Williams trick says something to the effect of "I wanna see some horns Chicago!"

All of us started fussing. We removed the CD and repeatedly spat on it, scratched it with car keys, and insulted its mother.

Look, bitch. If you're gonna be into Jesus, that's fine. We will ride around all day to your records. But once you start that "horns" shit, you cross the line. Praise God, or Praise Satan. But don't confuse a car fulla gangsters. We need you to tell us the direction to move in. Respect that, and don't send us in multiple directions.

I have never actually heard one of their songs. I just hate their name. Here is a small list of bands I have never listened to with names that I hate: