Last week, someone among the loosely-affiliated gang of cyberbullies I pal around with discovered a service called Pay4Tweet. The idea behind it is that the owner of well-followed Twitter accounts would link it up to their service, set a price, and advertisers could write their own tweet via your account, post it, and pay you whatever ridiculous sum of money you asked for (some asking for hundreds of dollars per tweet). Somehow this is not against the rules, meaning anyone can offer up their account and anyone can broadcast whatever they want through it. So a bunch of people did:

(The link in this tweet goes to a picture of a pig pooping on its own enormous balls.) 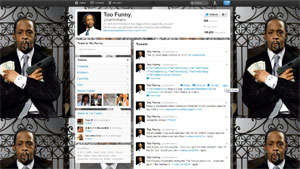 An example of a parody account. The small biography text explains that this isn't Katt Williams, then Katt Williams' face appears at least 13 times on this page (before scrolling).It was a lovely afternoon, but it also went a long way toward showing how ridiculous the bottom-feeding on Twitter can be. Take the realm of Katt Williams / Martin Lawrence / Tyler Perry / Will Ferrell "parody" accounts, for example. It's an entire ecosystem of accounts that might appear on first glance to belong to an accomplished funnyperson, but are actually a "parody" and not to be confused with anyone talented. Regurgitated platitudes, observations and jokes that are more suited to a knockoff Garfield coffee mug continually ooze out of them. These accounts are also unabashedly monetized and still somehow manage to have tens or hundreds of thousands of loyal followers who seem to think that Will Ferrel really does want you to click that sponsored link to get a sneak peek at the latest Crazy Frog ringtone. Remember Gallagher 2? The real Gallagher's brother who went around doing "Gallagher" shows and making a bunch of money off of yokels who just wanted to see a bald guy go hog wild on some watermelons? These assholes are hovering somewhere around Gallagher 8 to 10.

The "parody" account phenomenon extends to fictional characters, too. The most mind-shatteringly popular one being Lord_Voldemort7, whose entire schtick is, get this, referencing current events and relating them to Harry Potter in some way. Or just saying he hates people. Keep in mind that the operator of this account doesn't appear to have anything to do with J.K. Rowling or anyone who should be furious that this account's sponsored tweets are what a large segment of your fanbase regularly associates with your franchise.

For some reason that I probably won't ever understand, Twitter takes no action against those accounts, despite the fact that they must know full well by now how all this works. In fact, the chronically-terrible parody accounts often rewarded and shown as "Top Tweets" by the @toptweets account, which uses a fancy algorithm at Twitter HQ to determine that these awful tweets are usually wildly popular. The updating Top Tweets list has appeared in places like Twitter's front page and at times it unavoidably cluttered the search screen of Twitter's iPhone app, and in neither of those places would the "parody" disclaimer that most of the accounts have in their biographical fields be displayed. On some level, it's a willfully misleading practice on Twitter's part to let it appear as if Will Ferrell or whoever is sitting around pumping out shitty jokes and sponsored links on Twitter all day, and it's double-shitty that some jerk clever enough to write "PARODY I'M NOT REALLY THEM HA HA" is making a small profit.

If that last paragraph sounds like some kind of bitter, ineffectual call to action, it's really not. There will always be hacks no matter where you go (this article being no exception), and it's very overt and easy to tell who is selling you shit, so just don't buy into it and don't follow them. There are a great many very funny people on Twitter who aren't (currently) selling out so bad, so go seek them out. Here are just a few, but there are a whole lot more, and they want absolutely nothing to do with helping you get a free iPad. In fact, your gain would probably make them mad.