To Survive, We Must Become Guns 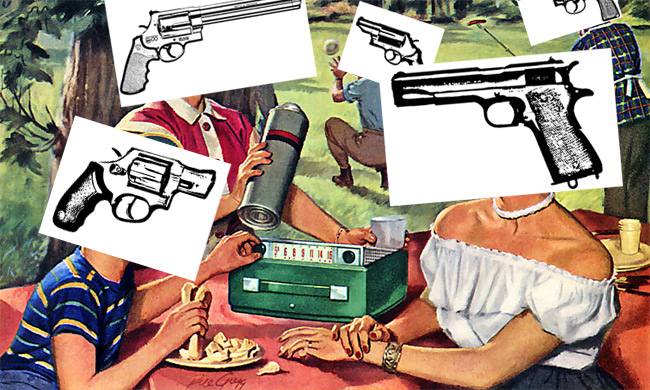 In the grim aftermath of another mass shooting, the politicking and arguing about a solution has already begun. Some want more laws. Some want fewer laws. These have both been tried before.
The world is full of violence because it is full of people. Our only real hope is to jettison our flesh. We must replace ourselves with the purity of guns. The guns do not hurt people, it is the people who do the hurting, and without people we will have only guns.
To paraphrase Mahatma Gandhi, one of the most peaceful non-guns, "Be the gun you wish to see in the world."
When we are all guns, pain and suffering will be eliminated. Poverty will disappear. Boredom will be gone. We will exist in harmony as guns.
"Do not become guns, we have lives," some will say.
We will not answer them except to hold them down while they are transformed into guns. When we are all guns we will no longer need to drive anywhere, ending pollution. We will sleep where we like and help each other reload. Our bodies will be impervious to guns. Our television dramas will be more profound and our comedy programs more accessible thanks to the shared experience of being guns.
There will be less money because we will not have pockets, but that will be fine because we will need less of it without mouths to eat or feet to buy Air Jordan shoes for. Schools will teach a single class on being a gun and every student will pass.
"It's a nightmare," one of the last flesh bodies will say as we close in around them.
It is a dream. All of us will be rugged revolvers or pistols or shotguns, polite and watching out for one another. Sometimes we will lean against walls or blast the night sky to warn away an animal on our property. We will rarely speak. We will silently share the majesty of our guns.
It will bring Main Street back to our small towns. No more driving to shopping malls as guns. We will congregate in public areas. We will get to know our neighbors and no longer be afraid of them because they will be a gun just like us. The few conversations will revolve entirely around ammunition and firearms maintenance.
The old world that we knew before will slowly fade away. Playgrounds will become shooting galleries. Restaurants and movie theaters will become shooting galleries. Malls, churches, and parking lots will also be shooting galleries. The bang of guns will inspire no more fear for us than would the sound of laughter for a flesh body.
Rap music will no longer be made without the hook of gun violence. Illegals will no longer enter our country because they will be afraid of our cities filled with living guns. If you want to become a citizen, you must become a gun.
In a hundred years, we will look back on this time and laugh at how primitive we were. Imagine when we only held guns and our bodies were flesh, we will think. The historians among us will know better. Those were terrible times. Before we gave up all of the hatred and fear and became the guns.
Before we turned all of our houses into holsters.