US Department of Video Game Travel

Please click on this link to read important information you should see before you travel in a video game.

This information is current as of today,

COUNTRY DESCRIPTION: Like most of the areas covered under the jurisdiction of the US Department of Video Game Travel, Spain is easily divided into stages or zones. In this case, there are three. While each has its own distinctive decor and unique look for its population of similarly dressed clones, there are certain facts that hold true whether you plan to visit rural Spain or creepy industrial island Spain. Please keep in mind that the infrastructure for a tourist industry is at best basic through most of Spain. Sleeping conditions range from horrendous (strange stains on mattress, extreme pressure to join along in religious activities, etc.) to merely terrifying (certain secluded cabins make comfortable enough resting places as long as the whole town doesn't insist on tagging along, a situation that is distressingly frequent). While there are no travel warnings currently in place for Spain, gamers are advised to take every precaution possible when approaching locals. The US Video Game Travel Department hereby emphasizes to the most extreme measure possible that any shouts of "¡Voy a matarte!" or "Morir es vivir" are NOT to be translated as friendly greetings, despite the dangerously inaccurate advice contained in the Fodor's Spain Adventure guidebook.

ENTRY/EXIT REQUIREMENTS: No passport is currently required in order to enter Spain as all customs and immigration officials recently vanished under mysterious circumstances. If you see any of them while traveling in Spain, please contant the US Department of Video Game Travel as soon as possible so their families might be informed. 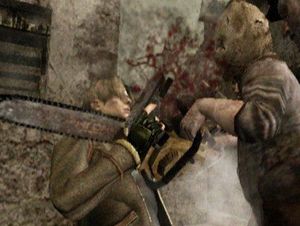 Sadly, the bag over his head impaired his vision and the world's shyest logger did not realize what he was cutting until too late.

SAFETY AND SECURITY: The security situation in Spain remains an ambigeuous one. Despite rumors of highly dangerious activities on the part of numerous citizins, the fact remains that not a single person who has entered the country has ever come out again to register a complaint with the Video Game Travel Department office. Thus we are forced to classify the security situation as officially unknown. Unofficially, we can only point to last words heard from a US gamer who entered the territory of Spain. More accurately we could describe them as last pained, wet gurgles.

CRIME: Despite harsh criminal penalties and a population that is commendably malleable to the hands of authority, crime in Spain remains startlingly high. Along with the usual murders, disappearances, human experimentation, kidnapping, cannibalism, violent sexual abuse, public swearing, biological agents used for purposes of genocide and illegal use of flaming catapults, there is a most unhappy epidemic of petty theft. Most anything left lying upon a dresser or even locked in a chest stored safely in a closet will almost certainly be looted within a matter of days. Facilitating this is an unusually visible and well-organized black market which, reportedly, will buy it at a high price.

INFORMATION FOR VICTIMS OF CRIME: If you find yourself the victim of any sort of criminal action within Spain, please report it as soon as possible to the nearest agent of the US government. Frankly, we're looking for an excuse to kick this country's ass anyway.

MEDICAL FACILITIES AND HEALTH INFORMATION: Medical facilities and capabilities in Spain vary between the three regions. While the rural area is incapable of handling even the most basic of medical emergencies as evidenced by the frequent and misguided attempts to perform surgeries through the use of broad swings of an ax, the creepy industrial island area has medical facilities to rival any developed country. Be warned however that these facilities have proven resistant to inspection, so the quality of care given is an unknown. Also sometimes there this guy that hides in an oven then pops out and dies right in front of you. Be advised that this will mess your day right up. But then you should see what they keep in their bathtubs in some places.

MEDICAL INSURANCE: In addition to standard medical insurance, it would be wise to check your policy for coverage of alien parasite removal. The Department of Video Game Travel has had to deal with this issue more times than you might reasonably expect.

TRAFFIC SAFETY AND ROAD CONDITIONS: While in a video game, U.S. citizens may encounter road conditions that differ significantly from those in the real world you nerds. The information below concerning Spain is provided for general reference only, and may not be totally accurate in a particular location or circumstance.

Road travel in Spain is considered extremely difficult, not only due to hostile locals but also the prevelance of locked gates between any two large open areas. Travel by car would involve near constant stops to open gates, simultaneously lift levers placed just out of arm's reach of each other, and clear various bear traps and trip wires attached to armed explosives left in the road, no doubt, by careless local children.

The advantages of travel by foot in this region is amplified by the near-supernatural agility gained merely by crossing the border from any neighboring country. While within Spain, a visitor will find that climbing and withstanding falls from high places is a manner of simple course. Swinging a knife around, of course, is still hard as hell. 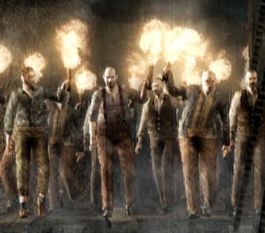 The unreliable electrical supply in Spain led to the introduction of these noble volunteers: The Living Streetlamps.

SPECIAL CIRCUMSTANCES: Spain is what is known as a Wacko Alien Religious Cult Thing. It is one of five such countries in the world, and, as such, a visitor should be very respectful of local religious practices. As representatives of western morality, it would be presumptuous for us to condemn any of Spain’s beliefs as "wrong" or "incorrect". If one of the believers wishes to inject some sort of wormy creature into your neck that will slowly destroy your soul and the essence of your personality, then we urge you to not disrespect their culture by refusing.

CRIMINAL PENALTIES: While in a video game, a U.S. citizen is subject to that video game's laws and regulations, which sometimes differ significantly from those in the United States and may not afford the protections available to the individual under the laws of real world physics.

Consequences for breaching the laws of Spain are uniquely harsh, and all visitors are hereby warned that all illegal acts are punishable by death. Illegal acts in Spain include:

CHILDREN'S ISSUES: There are no children in Spain. Not anymore. No children at all.