The Muppets; Hugo; My Week with Marilyn; Arthur Christmas;The Skin I Live In

Suddenly you're spoilt for choice for things to take your family to see. Don't worry, we'll steer you right. As for moviegoers without families who might want to see something a little more mature, well, I wouldn't bother.

EXPECTATIONS: It has been a pretty dire few weeks at the movies for me, so I'm counting on The Muppets to deliver all the joy I've been missing. I'm having trouble putting into words how nonsensically angry I still am at last week's movie. All this talking-animal nonsense has me dangling on my last nerve, but if anything can pull me out of this funk, it's the Muppets. That's a lot of pressure to put on a bunch of puppets, but there it is. My sanity depends on it.

REALITY: Think on this for a moment: It's been twelve years since the last time we saw the Muppets in theaters; the last big Muppet TV show went on the air fifteen years ago; and Jim Henson passed away six years before that. This is a franchise whose heyday was clearly a generation ago, and it doesn't seem like time has been all that kind to the Muppets. After the brand was sold off to Disney, they never seemed to know quite what to do with it, and it started to look like the Muppets might go to waste. With all that in mind, Jason Segel and director James Bobin try their damnedest to get the band back together for one more show, a show that aims to remind everyone of how much we all love the Muppets. (Don't we? Stop me if I'm wrong here...) 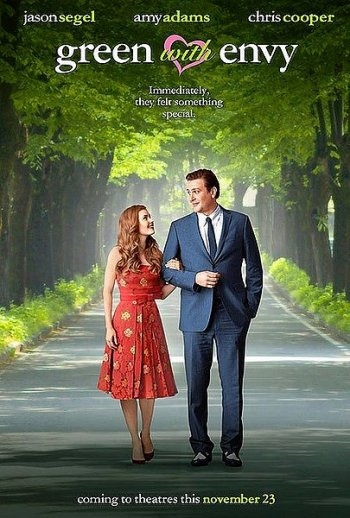 The subtle teaser poster that started it all.Incidentally, that's almost exactly the plot of the film. As the story opens, we meet Walter, a Muppet who's grown up being the Muppets' biggest fan. He tags along with his brother Gary (Segel) and Gary's girlfriend Mary (Amy Adams) on a road trip to Hollywood, where the three discover the old Muppet theater on the verge of collapse. Walter discovers that evil billionaire Tex Richman (Chris Cooper) wants to demolish the theater and drill for oil. Walter, Gary and Mary seek out the help of Kermit the Frog and convince him to get the gang back together for a telethon to save the Muppet Theater. Hijinks, disaster, and the warming of hearts ensue.

As plots go, that's as basic as it gets. Then again, when you're talking about the Muppets, that's all it needs to be. A big part of the fun of this movie is reintroducing us to the characters and letting them play around in movie-space again. Much like Weird Al's movie UHF, The Muppets takes the "Let's put on a show!" story as an opportunity to sing some songs, make fun of the entertainment industry and have a blast performing for anyone who will have them. While the film gets pretty manic at times, it knows when enough is enough. This isn't wall-to-wall slapsticky musical nonsense like some other films currently in theaters; it's a comedy that knows how to balance things like character development and plot with all the silly jokes and musical numbers.

Oh and the musical numbers... The film gives you some of the songs you'd expect to hear in a Muppet movie (even recreating the opening of The Muppet Show), but the new songs are a blast as well, and their sense of humor is every bit in step with the classic Muppets style of comedy. If there's a misstep in the film's musical program, it's the utterly bizarre rap number performed by Chris Cooper. Yes, you read that right. I'm not saying it isn't funny, but it sure as hell feels out of place.

What struck me about this film, though, wasn't how much I loved sitting in a theater watching a Muppet movie again. What struck me was that the people responsible for this film obviously grew up on this stuff. How many terrible films can you name that are based on things you loved as a kid? Far too many, I'm willing to bet. The Muppets, however, is clearly the work of someone who genuinely cares about these furry puppets. The script by Jason Segel and Nick Stoller never betrays the characters as we've always known them, and it's full of the very same fourth-wall-breaking sense of humor that has always been a Muppets trademark. 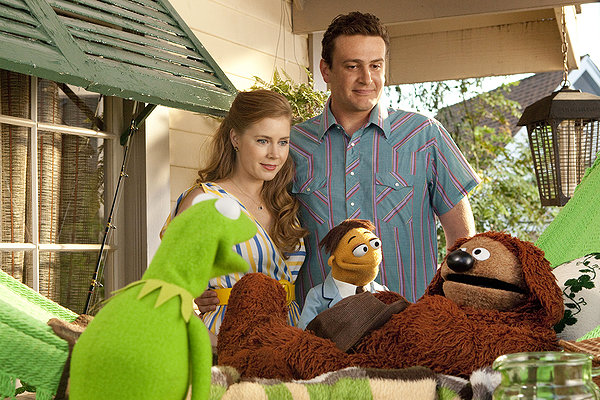 You know, other people could learn a lesson from this film. The way to revitalize a franchise and make money off it isn't to force it upon an uninterested audience (lookin' at you, Marmaduke). If people want a franchise to return, they'll demand it. People wanted to make another Muppet movie; there wasn't some Disney executive sitting behind a desk wondering, "How can we milk a few more dollars out of this Muppet thing?" That said, I'm sure once Jason Segel pitched his idea, somebody's brain lit up like a cash register.

While it does feel a bit overlong at times, this is a talking-animal movie I can get behind. The Muppets delivers the most laughs I've enjoyed in a theater all year, and the celebrity-filled cast is a joy to behold. It may not have the technical prowess of a Martin Scorsese picture, but it makes up for any shortcomings with some very smart, very funny comedy and a few musical numbers that ranks among the year's best. I can't imagine anyone hating The Muppets as much as some of the people in the film do, and that's coming from someone who almost had a psychotic episode thanks to a bunch of singing penguins.

MINORITY REPORT: I invented the Muppets, I'll have you know. I was in the habit of skinning frogs and pigs, wrapping my arms in the skins and making them kiss each other when a group of young boys happened to witness this occurrence. Only one of these boys escaped, and I later learned that his name was Jimothy Henson and he stole my ideas. I got my revenge, though, I got my revenge. - Montague "Legally Sane" Smythe