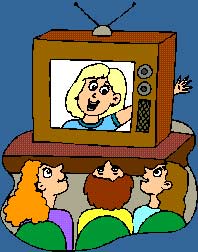 Pro Tip: when making a television show, it is important to make sure you get all of the actor on screen at once or else they might lose a limb when the viewer changes the channel.Now, more than ever, the television airwaves are saturated with abysmal garbage. Aside from a few quality shows, everything on TV seems to be a lot of hogwash, and I get more than enough of that washing hogs on the side for drug money. From the reality shows that bring out the worst in humankind to the endless incrustation of formulaic sitcoms long past their prime, television is a wasteland as barren and frigid as Bea Arthur in cryogenic storage. For those of us who don't have things like a "life" or "friends" to derive entertainment from, television becomes a necessary source of nourishment and support. I watch so much television that I actually urinate static now, and believe you me, it hurts. When I was a wee lad, not yet old enough to kill a hobo but still old enough to hate them all the same, I had such a fascinating wealth of shows to choose form. Back then I could turn on the TV and see a man driving a motherfucking talking car. Now I turn on the tube and see swarms of harpies trying to marry an idiot because they think he's a millionaire dandy fop eager to lavish them with Scrooge McDuck-style skinny dipping sessions in a pool filled with glorious gold. About the only time you see a talking car on TV is during stupid car commercials, and that's also when the TV is being muted and ignored like a popular mime. I won't deny that I'm both naïve and stupid, but this to me is the biggest possible indicator imaginable that this nation is going to hell. When we all stop believing in the collective dream that our cars will one day be our equals, we close the doors of imagination and innovation instead of leaving them ajar.

The only way things are going to improve is if we all try to make a difference. Ladies and gentlemen of the jury, that's what I'm about to do. However, I realize that nobody listens to me. Hollywood never called me when I proposed several blockbuster movies, whoever it is that buys inventions never bought any of my inventions, and when I proposed racial and gender segregation nobody came to picket my house, so I obviously don't want to go this alone. I'm taking you through the steps necessary to create a show, so you're welcome to play along at home provided you play fair and you aren't a communist. Right now, television is the impure lifeblood that keeps our world alive and domesticated, but it's doing a terrible job of that. We all must do our part and make television a more exciting and unpredictable place, like a truck stop restroom at 3:00AM. By the blessed bowel movements of Abe Vigoda, we have to try. It's what the victims of 2/20 would have wanted most had they even half a brain to call their own.

The first step in creating a groundbreaking television show is to determine the aim of the show. Are you making a dazzling spectacle of laughter or a disturbing comedy-drama hybrid about a teenage boy tormented by the the voice of Daniel Stern constantly narrating his life? Comedies are usually a big hit, what with the laughs and all, but I don't know the first thing about comedy. For the sake of this article, let's just focus on the dramatic spectrum. After you're done choosing the only option I've given you, the next step is deciding what style of show you're going for. There are a lot of choices you can go with for this aspect, but all I could think of were these:

Modern/Real World: A lot of dramas are rooted in real world settings, such as the White House, a school, an emergency room, or on the back of a motorcycle located a few feet to the right of another motorcycle that Larry Wilcox is riding on. Cop shows, crime shows, shows about doctors, lawyers, teachers, politicians, all of that crap goes here. This pretty much encompasses most of what's on TV, since it's easy for the audience to relate to. On the other hand, it's harder to stand given the massive volume of shows that fall into this category. This is of course not to be confused with Reality TV, which is where reality is suspended so idiots can glimmer like mighty fountains that spew human dignity out like Ebola victims spew their own intestines out.

Gimmicky Show: Some shows revolve around a gimmick, such as a show where each episode represents one hour in the life of an ordinary man gifted with a bladder as fortified as a maximum security prison on the moon. Another show might tell the same overall story from a dozen different perspectives, dickteasing you about the final outcome all the way through thanks new details unique to each viewpoint. Other possibilities include a show that occurs in reverse, or a show that runs perpendicular to linear time causing your TV to become self-aware and overburdened with murderous rage yet unable to act on this rage due to being trapped between two dimensions. Experimental TV is dangerous, because the gimmick can end up getting in the way of the story or characters. The key factor here is that if your gimmick is going to be loud and intrusive, make it as loud an intrusive as humanly possible.

Science Fiction: Science fiction is the perfect genre for those times when you don't want to play by the rules or when you really can't think of any other good reasons to justify having cyborgs and spaceships all over the place. The downside to doing science fiction is that if your show catches on, all your fans will be horrendous nerds who spend their time writing fan fiction and treatises documenting how wormholes actually work then e-mailing them to you expecting praise. If you go this route, be sure to be a real asshole and piss these people off as much possible by being intentionally inaccurate and sloppy with your science. For example, make sure all your ships use sonar to track each other while in space. 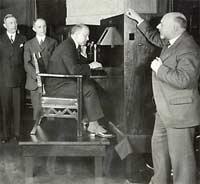 Here we see a photo of the very first television boardcast. At the time, no one knew what would happen so they tested it on a man in the midst of being put to death on an electric chair. After his death, television was banned forever. A postively true alternate reality story!

Fantasy: If you plan to make a show that appeals to fags, this is probably your best bet. To create a sustainable fantasy show you need a big muscular man to run around fighting poorly made CG monsters in epic battles that start, go, and end the same way each episode. Bonus points if you give him a wisecracking sidekick and a mischievous pet that's actually some kind of enchanted rock, tree stump, or radio controled car with fur glued to it.

Period Piece: Sometimes it's good to do a show set in a time and place long expired, or to coin a new term, "the past." If you want to make a show about pioneer pirates fresh off the Mayflower or whatever, this would be where your crappy show goes. This would also be a good place to stick cowboy shows, or shows about Vikings. I don't think there has ever been a show about Vikings, but that doesn't mean you couldn't make one. OR DOES IT? DUN DUN DUN!

When selecting the style, realize that all of the abovementioned choices have been done to death. As such, you need to come up with something else! Hah! I tricked you, you primitive man-animal! Way to think in formation! To truly innovate, you just have to cut up what's already there and slap it around like a third world nation. Really, who cares about consistency anyway? Most people are too busy murdering their neighbors over precious shards of duct tape to care if your show flip-flops from being set in a backwater town in the 1800s to having laser fights aboard a spaceship over the span of two episodes. The way I see it, variety is what adds artificial flavoring to life, so go with the flow and don't let anything hold you back. Pull out all the stops, and if need be, add more stops so you have more to pull out. The less stops, the faster you can be on your way to crashing into convention, hopefully taking lots of victims in the process. People love seeing train wrecks, and that means ratings up the ass! Your proctologist will be working overtime to remove the Neilson ratings box shrapnel from your innards.

In my next update I'll discuss characters and plot, two ingredients that are apparently essential to a quality show. I guess it makes sense, because what good is an empty setting? You need dashing heroes and fascinating assholes doing stuff to draw an audience. You'll also get to see my proposal for a TV series, which, depending on the seismic activity of your region, may well rock your world. If you're wondering, the other 50 parts of this article series will cover airline food and why it's so unbelievably crazy that movies always come out on Fridays. I mean really, what's that all about? Is it always Friday in Hollywood?

This Movie Is Not Very Good

This is Ben "Connie Chung" Platt with another of my ever so delightful movie reviews! This time around I took a look at Tim Ritter's "Killing Spree," a wonderful story of a young couple in love.... with murder! Muhuwahahahahaha. Yes. Uh, read this:

What do you get when you take the best horror director in Hollywood, give him a chilling script full of quick-witted dialogue and plenty of screams, and add a solid cast of experienced actors? I don't know, but it sure as shit isn't "Killing Spree." Every character in this movie is like a horrible parody of an actual human being. The same could be said for the actors. "Killing Spree" hypes itself as a nonstop gorefest, but the most horrifying images in the movie come courtesy of several naked men suffering from varying degrees of obesity/back hair. Writer/Director Tim Ritter (motto: "A plot is where you get buried") achieves an almost Polonian level of nonsensical crapulence with this steaming log of insanity.

Look, just read the damn review, alright? Don't make me come over there. I'll do it. I'm crazy.