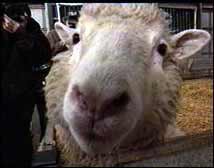 She will be missed.

Tragedy struck over the last week for needlessly cloned animals everywhere. Dolly the sheep, the world's first cloned mammal, was put to sleep. The six year old sheep was diagnosed with an incurable lung disease. She also suffered from premature arthritis, which cued the scientists to look for other signs of illness. It also raised the question, what sort of people spend so long staring at a sheep that they can tell when it has arthritis? I consider myself to be fairly well-versed in basic animal biology, and I have trouble determining whether a sheep is alive or dead. Dolly is definitely dead, though, and that, after all, is why we're here today. For today we mourn not only a good and noble sheep, but also the hopes and dreams of the cloning and cloned communities. Dolly's disease-riddled corpse more closely resembled a sheep of twice her age. This has been a problem that has plagued scientists since Galileo - sure you can clone a sheep, but at the midway point in its life, molecular decay sets in at an alarming rate and the damn thing ages faster than a kid with a fake ID. If the Scottish geneticists (or as I call them, "drunks") hadn't given Dolly a one-way trip on the Wormfood Express, she would have turned to a pile of dust within a week anyway. As soon as the cellular cohesion starts to slip, the clone is basically done for, you know what I mean?

In memoriam of Dolly, that noblest of cloned sheep, I thought it would be nice to take a look back at Something Awful's take on Dolly's original creation. However, it came to my attention that Something Awful wasn't around back in 1996. To remedy the situation, I marched straight down to SA HQ and cloned myself using the Official Something Awful Clone-O-Matic 4000 (motto: "Twice the clones, half the smell"). Thanks to today's modern technology, cloning is now a quick and simple procedure, so it's no surprise that everything went perfectly. My clone was healthy, eager to go, and handsome as all get out. To avoid confusion, I decided to give him his own name. I considered "The Revenge of Ben 'Greasnin' Platt," "Ben 'Ben Greasnin Platt' Platt," and "Greasnin 2: Judgment Day" before finally deciding on the more manageable "GreasninDeux." The way I figured it, if he's got all of my winning qualities, he's going to cut in on half of my action and my popularity will suffer. On the other hand, no one will want to touch him if he sounds like a dirty Frenchman. Problem solved. With that out of the way, I quickly herded GreasninDeux into the Official Something Awful Time Machine (motto: "I'm a freaking time machine. That's about as self-explanitory as it gets") and we rocketed back to the year 1996. I gave my clone instructions on how to get in touch with me, then piloted the time machine back to the present day. Sure, I left my clone in the hellhole 90's without any possible way of returning to our time, but the time machine costs millions of dollars, and if you think I was going to let that junkie drive, you're crazier than he is.

Soon after my return to the sexy present, I received an email containing a front page update by none other than Ben "GreasninDeux" Platt from June, 1996. It was written in my exact style, which means it was poorly formatted and loaded with typos, the bulk of which I have since ironed out. Let me tell you, reading this thing was like staring into a mirror. A mirror reflecting a copy of one of my updates. Only the words on the actual update would have to be backwards so they could be read in the mirror. Yeah, that's basically what it was like. I mean, I guess so. In any event, here is his report, over six years in the making.

I Split the Sheep, the Sheep I Split

Help! This is the real Ben "Greasnin" Platt! My clone dumped me in the past and stole the time machine so he could replace me! Oh, for the love of all that is holy, you have to help me! Ha ha, just kidding. This is really the clone. I love that gag though. I was all like, "Oh no, my clone is evil," and you were all like, "Whoa, we should help him." It was great. Anyway, hello, people of tomorrow! This is Ben "GreasninDeux" Platt coming to you from the year 1996. Everything is fine and dandy here. I'm enjoying 1996's many delights, including its weekly Mel Gibson movies, its angst-ridden, boyband-free music scene, its frequently hilarious Simpsons episodes, and its competent, if philandering President Clinton. And on a personal note, the ladies of the 90's can't get enough of me. I think they're attracted to my French-sounding nickname. But I digress. 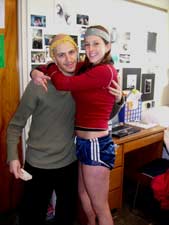 That was a fun month.

Greasnin told me that I was supposed to write about the first successful cloning of a sheep. At first, I was sort of confused. He dropped me off back in February, and after a few months of no clonings, I figured that I must have gotten something wrong. So then I thought that I was supposed to clone a sheep. Let me tell you, it's not as easy as it looks! By mid April, my studio apartment (by the way, thanks a bunch for splurging on my digs, Greasy, you cheap bastard) was filled with exploded sheep carcases. Personally, I was cloned in a giant tube, but just try finding a decent giant tube in the 90's. The best I could get was a toothpaste tube, and you have no idea how hard it is to get a sheep into one of those. By May, I had given up entirely on the sheep cloning idea and devoted my life to complete debauchery. Women were constantly around. They loved the way my entire apartment was lined with wool. It was great, but strangely unfulfilling. Then came the happy day in June, just a few days ago, when the Scots broke the news of their successful sheep duplication. Well, I couldn't wait to get into hot journalistic action, so I got myself back into shape. I threw out my bottle of painkillers, shot my hookers, put on a clean shirt, and got down to work.

What a day for science! The genetic researchers (or as I call them, "drunks") over at the Roslin Institute in Edinburgh, Scotland successfully cloned a sheep by implanting a cell from the breast of a healthy adult sheep into the nucleus of an embryo. Since it was a breast cell, the scientists named the sheep "Dolly," after the famously busty country singer. Once again, one of the most puzzling questions in all of scientific history has been resolved by boobs. Is there anything they can't do? Dolly is perfectly healthy, so the question now is not can we clone mammals, but should we? 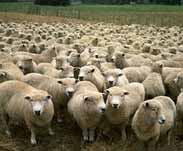 Face it, one more won't matter.

The answers is yes, of course we should. Don't be stupid. If we couldn't clone mammals, I wouldn't be here. However, if we're going to go cloning things, we shouldn't waste all our precious clone juice on sheep. I mean, I've been racking my brain, and I can't think of any reason whatsoever that the world would possibly need another sheep. And even if we did, why would we care if that sheep was genetically identical to another sheep? Does anyone really give a damn? These are sheep we're talking about, here. If they showed me one sheep, then showed me another sheep and told me they were clones, I would have no reason to doubt it. These are basically sweaters with legs we're talking about, here. One is more or less the same as any other. As far as I know, every sheep is a clone. Do they have wool? Do they go "baa?" Then they're all identical, as far as I'm concerned. 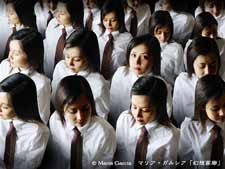 It's not like this is even a decent method of cloning. The purpose of cloning is to have two completely identical beings in existence at the same time so that one can do all the work while the other spends time with the family, until he gets bored and cloned himself again so he can take some time for himself. At the time of my cloning, I was in every way identical to Greasnin. If he had wanted me to do his job while he spent time with the wife and kids (his right hand), we could have worked something out and no one would have been the wiser. The way that Dolly was cloned, she will have a complete lifetime, from birth to death. By the time that she reaches the age of the sheep who donated the breast cell, that sheep will be the same number of years older. Dolly will just be living a life that another sheep already lived. If I was cloned that way, by the time I was old enough to write this article, the original Greasnin would be fat, old, and President of the United States. What's the point? When have you heard someone say, "You know, my life has been so much fun for everyone to watch that the world deserves to see it all again. I'm going to go get cloned." Never, that's when. Now, when is the last time you heard someone say, "You know, the Lebanese government has been sending assassins after me ever since I uncovered the horrible secrets contained within that forbidden crypt. I need someone to take the heat off me. I'm going to go get cloned." Hell, you can't walk down the street without hearing that!

While the method of cloning may be stupid and pointless, the fact that scientists were able to clone Dolly will undoubtedly prove invaluable to the field of genetics. I'm no expert, but I have to imagine that the information that can be learned from studying Dolly will have astounding human implications. I predict that by the time you're reading this, cancer and heart disease will be eradicated completely. As for Dolly, I predict that she's going to have a long and full life. GreasninDeux out!

Wrong! Dolly died of cancer! The irony is priceless. Even though his predictions were way off, GreasninDeux's report is greatly appreciated, mainly because it saved me from having to write a complete update for this week. On a somewhat darker note, we here at Something Awful have learned that GreasninDeux died sometime in 1998. Apparently he developed some sort of incurable lung disease and started aging rapidly. Oh well. At least it didn't happen to anyone we like. Or Frolixo.