That's right, the year 2001 has come and gone. Time continues to blindly hurtle itself forwards into the abyss of the future, folding itself into a spatial parallelogram of murky mystery and ever-cheaper card tables. As Ed Wood so succinctly stated in "Plan 9 From Outer Space," "We are all interested in the future, for that is where you and I are going to spend the rest of our lives. And remember, my friends, future events such as these will affect you in the future." Truer words have never been spoken in the past, where they were spoke, or perhaps would be spoken if one had thought of speaking as one spoke while speaking. 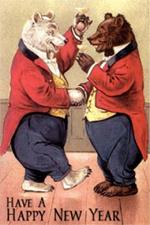 Happy New Year from an alternate reality where bears are suave and sophisticated!

I for one am glad to see 2001 go. Good riddance. It was easily one of the worst years of my shallow existence, and throwing out this stupid Far Side daily calendar and replacing it with a Dilbert daily calendar should solve all my problems. 2002 is a vast improvement already since it's one of the few years you can spell backwards and still get right, which is great if you're dyslexic. I'm not dyslexic personally, but I'm often mistaken for having a variety of birth defects. So 2002 is great. Especially if you're retarded.

Lots of magazines, web sites, and urine-stained homeless people are making bold predictions as to what the new year may bring. My forecast is simply this: 2002 will either be better or worse than 2001, some people will die, and something spectacularly stupid will happen. It may involve Don King, but it may not. It will also rain somewhere. I may be going out on a limb here, but it's a risk I'm willing to take.

The sad truth is that 2002 may just be the last year of human existence. Peace isn't exactly the hottest fad right now. Pakistan and India may just launch nuclear holy cows and atomic Korans at each other, terrorists will probably let loose more suicide attacks on innocent dermatologists, or an asteroid could strike the earth at a 38 degree angle and destroy all of mankind. You never know.

How will humans be remembered? My guess is not very fondly at all. Any Earth-residing animals that survive whatever disaster wipes us out certainly won't have very many positive things to say. For every bird that says something like, "some old lady built me a house and fed me seeds, I miss humans!" there'll be four times as many birds telling tales about how their ancestors were locked up in cages and forced to say "POLLY WANT A CRACKER???" over and over again until they were starved to death. Dogs will share embarrassing stories about being ordered to retrieve sticks and catch Frisbees against their will while being dressed up in stupid looking sweaters. Ants will speak of murderous massacres caused by eight-year-old boys with magnifying glasses. Farm animals will whisper sexy stories of bestial abuse. And all the creatures we didn't eat or lock up in zoos will curse humans for leaving them with a polluted crapfest of a planet to live on, coated with rotting hulks of concrete, steel, and Wal-Marts.

Aliens will dismiss humans as a goofy, silly, primitive race that only barely managed to launch itself into space. Even then they couldn't muster up the fortitude to colonize or even set foot on any of the other planets in its incredibly tiny solar system. Just having a couple of chumps in diapers gallivant upon the moon was considered a significant feat!

But since there's unfortunately a slim chance that the majority of us homo sapiens will survive to see another year, I present to you one of those stupid year-end "out / in" lists popular with vapid publications such as Entertainment Weekly. These are supposedly "hip" pieces of editorial that tell you what's trendy and what's old hat. For example, Entertainment Weekly's out / in list looks something like this:

But I can assure you that Something Awful would never stoop to Entertainment Weekly's level and print such a thing, partly because we don't have any printers or paper. Anyway, here's our stupid list:

So Happy New Year. Way to start things off on the wrong foot, jackass.