Law and Order Up! 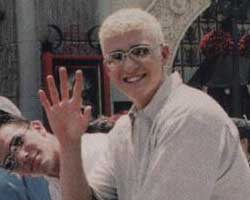 The face of crime today! Run!

The American public has somehow lost its faith in the justice system over the past few decades. People across the nation spend sleepless nights, tossing and turning restlessly and worrying about the current state of the American legal profession. Then their wife rolls over and asks, "honey, what's wrong? It's not the justice system again, is it?" and the other person replies that this is indeed the case. Then they kiss and have justice system sex which is very hot and provocatively alluring because they're both women or one of them is a very effeminate man who looks like a female if I squint really hard and drink that beer they sell in the bad part of town which has a name like "Captain Steamship's Incredible Alcohol Adventure." That's the name of the beer, not the part of the town. If there was a town in Washington named "Captain Steamship's Incredible Alcohol Adventure," I'd move there within minutes or at least purchase a t-shirt with their town's name emblazoned across the back.

Although I've gotten momentarily sidetracked by "Captain Steamship's Incredible Alcohol Adventure," I am still adhering to my original point about the justice system, whatever the hell it may be. The public's confidence in the legal system began to erode in the 1980's, around the same time President Regan started his infamous "war on drugs." His idea to combat drug trafficking and use revolved around two key elements:

1. Ordering police officers in Los Angeles to stand around and scowl more frequently,
2. Airing anti-drug public service announcements between Saturday morning cartoons. These cartoons all featured some talking animal that had seven frames of total animation, four of which were used on their breakdancing sequence. These announcements would be lodged in between cartoons about floating magic Rubix Cubes that could speak, so children really got the message that drugs weren't for them; they were for the people who make cartoons.

The war on drugs soon shifted to the war on gangs since you can shoot at drugs all you want but you'll never be able to kill them, unlike gang members. The police targeted anybody wearing headbands, jean jackets, and those 80-pound cassette tape boom boxes that were unfortunately popular back then. Then the gangs smarted up and stopped wearing headbands which turned out to be the fatal flaw in the law enforcement's grand scheme. As time progressed linearly, the police officers began to adopt a new anti-gang plan in the 90's, one which consisted of simply shooting random black people and hoping they had committed a crime or were planning to commit a crime or once saw a movie about a person who thought about committing a crime. While this plan stopped a lot of would-be criminals from potentially breaking the law, it didn't help the public's perception of the American law enforcement division, a negative outlook which they still suffer from to this day.

However, today's update is not about the many flaws inherent to our justice system. As many of you readers out there know, Something Awful is a very positive and upbeat site, choosing to continually adopt a cheery spin on every outlook and news item. We're a digitized version of a three headed octopus that is part Kathy Lee Gifford, part Martha Stewart, and part floating wad of death from the movie "The Langoliers." Also we can shoot a combination of fire and ink (which we call "flaming ink") at anybody who seems threatening to us or happens to be our natural predator, the dove. So strap yourselves in, folks, because your shaky faith in the American legal system is going to be completely rebuilt and strengthened by the rock-solid foundation of the following article.

Men's lawsuit challenges constitutionality of park sex sting - The suit alleges that men perceived as gays seeking illegal sexual activity were arrested and their cars were impounded for acts such as waving at police decoys. According to the suit, Gmerick, who often used the park's walking trails, was arrested in June when police said he gestured suggestively to an undercover officer. He was charged with being an annoying person, but the charges were dropped. Other plaintiffswere arrested for wavingand accepting an undercover officer's offer to go have a drink, they said in the suit. (NOTE: I added the bold print for emphasis. Same goes for the pink font. I'm not sure why I underlined part of it, though. I think I pressed the wrong key.) 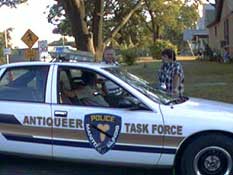 Now if you're like me, and I know I am, you'll find this tidbit of news to be the most exciting thing since the last time Salon.com laid off people and hinted at bankruptcy. Finally, the police and other government officials are boldly and recklessly pursuing the true criminals in today's society: the friendly waving homosexuals. Why it was just last week when I found myself walking down the street minding my own business, when a probable homosexual waved in my general direction, causing a nearby baby to began sobbing uncontrollably and her mother to remark, "when will we ever be free of these horrible homosexual greetings?" I consoled her as best as I could while the homosexual menace casually strolled down the sidewalk, arrogantly reveling in his immunity to legal prosecution. Our society has been oppressed too long by the iron-fisted reign of terror caused by gay waving people and I wholeheartedly support this crackdown on individuals who ignorantly believe that greeting people and drinking in bars isn't a highly illegal and amoral activity punishable by the death penalty or at least the towing of their car.

This article is simply fantastic in a wide variety of ways. First off we've got a large portion of the Detroit Police force currently sitting around in unmarked cars, using binoculars and hidden cameras to look for horny waving homosexuals. I hope the city took some of their officers off less-important duties such as busting crackhouses or patrolling neighborhoods so they could become part of Task Force Anti-Queer. They probably gave the anti-queer patrol some really nice jackets that had a penis logo with a big "X" through it. Then the anti-queers piled into their unmarked anti-queermobiles and drove through the bad, crime-infested part of town so they could reach the nice, fag-infested part of town where homosexual men gallivanted about and waved at each other with frightening ease. After a lengthy stakeout, a Task Force Anti-Queer member would approach a seemingly homosexual man and engage in the following conversation: 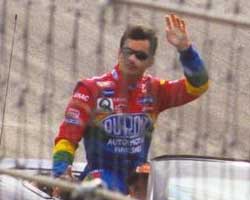 Oh no, not you too Jeff Gordon! It's a regular CRIME WAVE! Ha ha! Get it? That's comedy! Thanks for joining in!

I'm positive it was undoubtedly difficult for the city of Detroit to recruit enough officers to fill out Task Force Anti-Queer since policemen are well aware of the inherent dangers in staking out waving homosexuals. For example, a West Lincoln, Ohio officer was fatally wounded in 1997 when he was on a routine gay greeting patrol mission outside of a strip mall. He caught a glimpse of what appeared to be a man of the homosexual persuasion apparently saying hello to another individual who was a known repeat homosexual offender. The officer shouted a warning at the two men and began to run after them but they responded by turning towards the officer and spraying greetings in his general direction. The underequipped officer was caught in a wave of waves, falling to the ground and dying before an ambulance could arrive at the scene. The two homosexuals still remain at large and are assumed to be friendly and dangerous. If you see these two men, please report them to your local authorities. They can be best described as "gay."

If this weren't enough, and by God it most certainly is, the article claimed the Detroit Police are also cracking down on "being an annoying person." Finally, all my anti-Carrot Top legislation has been approved and enacted! I'm not exactly sure what the constitutional definition of "annoying" is but I'm fairly sure that obvious stuff such as waving and agreeing to visit drinking establishments with undercover police officers could easily be considered "annoying." I'd like to add the following offenses to the official illegal annoying list of crimes:

Being a cashier who prints out and forces you to take 500 feet of receipts and paper when you buy anything from their store.

Walking down the sidewalk in front of me and then abruptly stopping for no apparently reason, causing me to either bump into you or lunge out of the way and into oncoming traffic.

Waving without a waving license.

Waving while being under the influence of homosexuality.

Working in a restaurant that officially closes at 11:00 yet you stop making or serving new food at 10:20 and you force me to order something that's been lying around the back of the kitchen for weeks because nobody is dumb enough to ever order it.

So it finally appears that our law enforcement system is shaping up and becoming the utopian dynasty that we all dreamed about the night after eating really spicy Chinese food. Our society is finally approaching the day when women, children, dogs, and other non-homosexual entities can safely walk down the street without fearing the abject horror of being greeted by people who know an awful lot about showtunes. Before you know it, the streets will be free of friendly homosexuals and will be populated by its rightful denizens, people who wear bandanas, Jean jackets, and boom boxes. Oh what a future indeed!