It's hard to believe that nearly thirteen years have passed since Wild Wild West captured the imaginations of moviegoing audiences worldwide. Now the film only lives in our memories. It spreads from person to person, around campfires and on impromptu stages by traveling play actors. With our society fulfilling the role of a dedicated custodian, it will continue to live on.

Everyone has a favorite scene. Me? I don't think I could narrow it down. It doesn't seem possible.

Who could forget the first time we see Kevin Kline's character, West Wild? There's a plush red sofa, embroidered in ornate brass, a rumbling steam furnace providing power to the pistons that serve as the couch's feet. A man in a fancy suit is reclining, a newspaper covering his face. The headline reads "NEWS". Slowly the paper lowers, revealing West Wild's charismatic features. His eyebrow raises. Hilarious. 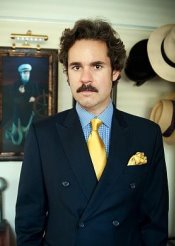 Kevin Kline on the set of Wild Wild West.What about the big shootout at the end of the movie? Will Smith runs down a snowy mountain, shooting every single tree. He doesn't miss a single shot, because at this point in the movie he has come to believe in himself. The reluctant hero becomes the leader he was meant to be. No tree goes unshot.

Salma Hayek as Bleepnauter is a revelation. We know that she can act. We know her beauty is beyond words. What we don't realize - at least until the movie's most surprising scene - is how terrible she is at Risk. The fourteen minute montage sequence of her loss to Kevin Kline is a remarkable cinematic triumph. She calls for the scene to end. We hear the director yell at her to continue. Salma grumbles, considering the pieces. Finally she decides to push into Australia. Kevin Kline rolls the dice jauntily, wiggling his eyebrows as his forces repel hers once again. She kicks him under the table. As he falls out of his chair, the gyro-apes burst into the room.

I don't know a lot about poetry, but when Will Smith is turned into a baby and Kevin Kline has to breastfeed him, that is certainly the embodiment of poetry in film. At once we see the vulnerable side of Will Smith's tough-as-nails gunfighter, the responsible side of Kevin Kline's loveable rogue, and the judgmental nature of a crowd at a robotic boxing match.

Of course, any scene with the film's villain is bound to be a popular favorite. Eric Stoltz as Mask is spellbinding. When he stomps into the space station's control room, points at an underling and growls "Do things better! Or else!" you feel like he's yelling at you. Seeing him get his comeuppance at the hands of Salma Hayek's Risk ghost army is cathartic, a perfect example of dramatic irony. 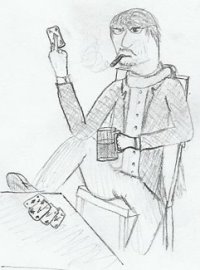 Early storyboard art, depicting the moments before the riverboat attack.For some reason, the comedic sidekick rubs people the wrong way. Many consider it to be the low point of an otherwise flawless film. I, on the other hand, think it is brilliant and very necessary. The photographic negative of Kevin Kline's face is a terrific character. I really like the way that a shrieking noise accompanies the photo every single time that it is overlaid across the entire frame, spinning endlessly.

As an admitted sucker for romance, I'm also quite fond of the rocket soldier man subplot. You really get the sense that the rocket soldier man would do anything for laser rifle girl, but duty holds him back. The very weapons that they wield for honor keep them apart from one another. When his rocket and her laser meet across the battlefield, taking down the Blitzer Blimp, their eyes meet. You know it's the closest the two will ever get to consummating their love. It's sad, and yet somehow heartwarming.

I regard each of these scenes with equal admiration and reverence. Ask me to choose a favorite and my mind will lock up like Will Smith's computational paradox toaster (which finally works at a crucial moment, springing two slices of toast directly into Smith's hands, allowing him to disarm the magnet bomb atop the Eiffel Tower).

It's just impossible. What I can do, however, is suggest the most important scene of the movie. The part which explains why mankind has become Wild Wild West's living legacy, why those who possess battered action figures is treated as a de-facto king.

This takes place relatively early in the movie. Will Smith and Kevin Kline's guns have been emptied. Salma Hayek's garter hides no more knives. They huddle together in the ruined casino of a steam riverboat before an impossibly tall clockwork yeti. All hope seems lost. Then, inspiration strikes. Salma Hayek tilts a nearby lamp on its side. The three characters each raise a hand, combining their efforts to project a shadow puppet of a baby onto the chest of the mechanical monstrosity. The yeti looks down, makes a surprised noise, then turns into a baby.