The Twilight Saga: Breaking Dawn - Part 2; Lincoln; This Must Be the Place; Here Comes the Boom

There's a tie for Movie of the Week this week -- and one of them isn't the one you think it is! Here are the contenders: Sean "Keanu Grieves" Hanson finishes off the Twilight saga with Breaking Dawn - Part 2, Joseph "Jay Dub" Wade gets all historical with Lincoln, Martin R. "Vargo" Schneider rocks out with Sean Penn in This Must Be the Place and Ian "Professor Clumsy" Maddison plays catch-up with mediocre Kevin James vehicle Here Comes the Boom.

EXPECTATIONS: Considering Breaking Dawn: Part 1 was the funniest movie of 2011, my hopes couldn't be higher for this immediate sequel.

REALITY: Try to follow my logic here: Because Breaking Dawn: Part 2 is the better movie, Breaking Dawn: Part 1 is the better film. Part 1 served as a brilliant deconstruction of Stephenie Meyer's vapid toxic-romance saga, abusing the language of cinema to create the ultimate parody of her bafflingly popular series. This time, screenwriter Melissa Rosenberg and (Oscar-winning!) director Bill Condon have to work their way through a much busier plot in 115 minutes, leaving Condon, Rosenberg and his actors less leeway to subversively fuck with Meyer's sacrosanct novels.

Consider the density of their respective plots. In 117 minutes, Breaking Dawn: Part 1 concerns itself with three episodes in Bella Swan (Kristen Stewart) and Edward Cullen's (Robert Pattinson) relationship: their marriage, their honeymoon and the difficulties of delivering a half-human, half-vampire demon fetus that requires Bella to sip blood smoothies. See? Lots of room to breathe. 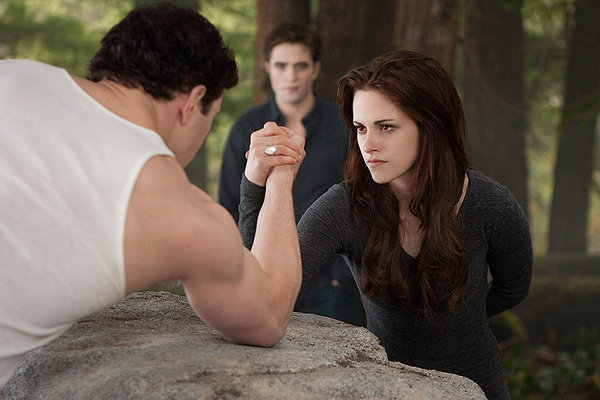 In the 115 minutes allotted to Breaking Dawn: Part 2, Bella must learn the ins and outs of being a vampire. Bella, Edward and Jacob (Taylor Lautner) must figure out how to raise the rapidly aging Renesmee (a computer-generated blend of several different child actresses who will no doubt succumb to heroin addiction by 2016), who moves through clothing sizes by the hour. Jacob must convince Renesmee to keep her fucking mouth shut about his onging sexual abuse.

ALSO: The Cullen clan must scour the world to enlist allies for their standoff with the Volturi, an ancient coven of vampires that's bent on Renesmee's destruction. Everyone - the vampires, the werewolves, Dakota Fanning - must converge in the wilds of Canada for the most epic staring contest of all time. And then there's the kicker: Prior to the credits, there's an interminable montage of Twilight's "greatest moments" interspersed with page scans from Meyer's novels to remind her rabid, impressionable fanbase that the franchise is over and now they must seriously question the morality of drowning the children they conceived with the Levi Johnstons of the world in 2006, when Twilight, domestic violence and emotional abuse were all the rage. See? Very little room to breathe. 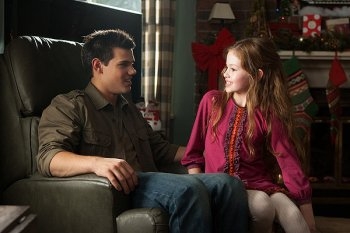 Okay, that's a little weird.Because it must maintain its momentum to steam us through the plot, Breaking Dawn: Part 2 is technically - marginally - a better movie. But when it comes to Condon's skillful use of technical incompetence to underscore Meyer's literary failures, Breaking Dawn: Part 2 is significantly less successful as an artistic statement. Thankfully, it's not entirely devoid of moments when the cast and crew get a chance to skewer the author and the franchise they've come to hate.

The first act, which serves as sort of an origin story for Vampir-Bella, is the most successful in this regard. The opening sequence, in which Bella runs through a forest, time becomes fluid and she observes the smallest of critters at work in the woods, plays like a big-budget animated GIF: Bella's fixed in the foreground while trees, leaves and sky zip by at improbable speeds in the background.

Bella is finally allowed to blossom into a bully under Edward's tutelage. She gains confidence. When Jacob calls Renesmee "Nessy," Bella screams at him: "YOU NAMED MY DAUGHTER AFTER THE LOCH NESS MONSTER?!" She puts him in a headlock and throws him to the ground. She throws one of his werewolf buddies against a tree. To test her strength, Emmett "Pale Beefcake" Cullen (Kellan Lutz) challenges her to an arm-wrestling match. Not only does Bella win, she also celebrates by pounding a boulder into shards with her bare hands. She even pushes Edward around. "Bella, you must be careful with me," Edward whines. "You're stronger than I am." Finally, a director willing to wring comedy from a victim-cum-abuser! 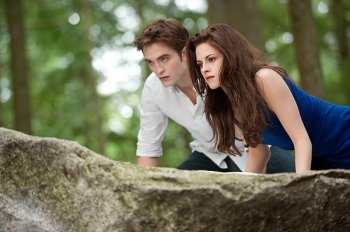 Kristen just wanted to prove that she's a btter ridiculous overactor than Robert.There's more: The leaders of the Volturi look and act like a Black Sabbath cover band, complete with a leader whose inappropriate squeals provoke laughter even from audience members who clearly weren't expecting a comedy. The white American Cullens form a Rainbow Coalition of multi-ethnic vampires to oppose the Italian Volturi, expanding the parameters of the Magical Negro to include Arabs, Russians, Brazilians, Amazonians, Native Americans and the Fighting Fucking Irish. Those two Russian vampires? They look like a post-punk duo. Maybe Breaking Dawn: Part 2 is secretly the history of English music from 1969 to 1980.

All of this culminates in a war of monologues between Bella and squealing Volturi frontman Aro (Michael Sheen), in which Aro declares war on the unknown while Bella vomits out a thinly veiled plea informed by Mormon values. This scene parallels that time-old depiction of the secularist-as-persecutor. This is all moot, of course, once Alice "Omniscience" Cullen (Ashley Greene) shows Aro the future, in which Renesmee is not at all the hellchild the Volturi imagined.

The Cullens reign victorious. The Volturi retreat. Religion wins. Science loses. And, sure enough, I'm thanking God this seven-year abortion is finally fucking over. There's no such thing as an atheist in a foxhole - or at a screening of Breaking Dawn: Part 2, apparently.

MINORITY REPORT: If this movie is the history of music, then the whole series has been about Plain White T's and John Mayer fighting over the love of Lana Del Rey. And now I hate this series and this generation more than ever. - Martin R. "Vargo" Schneider