Wow, We're Asking For It

Well, it looks like I missed Top Ten Week. Technically, I should have gotten in on it last Sunday, but I never got that memo. It's too bad, I really would have liked to have been a part of that momentous occasion in this site's history. Guess I'll have to put this on my Top Ten Disappointments list, huh? Guys? Nothing? Ah, forget it. Top Ten Week sort of came to a screeching halt on Thursday anyway, when Reid "Frolixo" Paskiewicz decided to blubber on about how he managed to get some girl to marry him. Yeah, he had that crappy Krispy Kreme donut list in there, but you know that was a cop out. Not that I can really blame him for being excited about getting married - I mean, if I made one of the signs of the apocalypse come to pass, I'd probably write about it, too. But anyway, Top Ten Week was fun while it lasted in that quirky, amusing, cheap-way-out-of-writing-actual-articles sort of way, but now it's back to business as usual, and I'm going to start this comedy train a-rollin' the best way I know how - with a sobering message of our horrendous failure as a civilization! 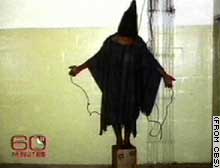 The Dread Pirate Horribly Abused Iraqi Prisoner is here for your sooooouuuuuls!

If you've been following the news lately, I'm sure you've heard about the pictures of the U.S. soldiers abusing Iraqi prisoners. I'm going to assume that since you're reading this site, you probably haven't been following the news, though, so let me fill you in on the details. A bunch of photographs were just released this week that showed American soldiers clowning around by abusing some Iraqi detainees at the Abu Ghurayb prison in Baghdad. The forms of abuse include putting hoods on the Iraqis and then peeing on them, putting hoods on the Iraqis and stripping them of all other clothes for photo sessions, and putting hoods on the Iraqis and hooking them up to some electrical wires. There is currently an investigation underway regarding one of the prisoners dying, potentially as a result of some of this abuse. Considering that we're supposed to be in there helping these people rebuild their shattered country and establish a freestanding democracy, these reports of abuse at the hands of U.S. troops raises a number of questions. For starters, where did they get all of those hoods? Is there some sort of wholesale hood distributor over there in Iraq? Is this distributor part of a chain? If so, when can we expect a branch to open here in the States? I ask, because I've got some Iraqis in my basement, and I've been putting duct tape over their eyes before I pee on them, but then it's always such a bitch to get the tape off cleanly. It leaves that sticky gray gunk behind. You know what I mean. Some quality hoods would really help with keeping the horrible degradation of these people clean and efficient.

Seriously, this is one of those "What the Sweet Merciful Fuck" situations that no one quite knows how to handle. It's like we all took it so for granted that we'd never have to deal with this sort of thing that now we can only sit with our thumbs up our asses and try to make lame excuses while the rest of the world gets ready to hand us the bitchslapping of a lifetime. If terrorists were pissed at us before, now they must be formulating ways to somehow kill each and every one of us individually. I mean, sure, we marched into their countries, overthrew their governments, parked tanks in front of their mosques, and told them their ways of life were savage and wrong, but they had to cut us some slack, because at least we never put hoods on people and then pissed on them. That was our last leg with the terrorist community at large. Now we just look like assholes. But hey, at least we're assholes with empty bladders. 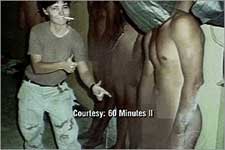 Now I see what this war was really about - those shifty Iraqis and their damnable blurry crotches!

We here at Something Awful have put our support behind the troops over in Iraq since day one. No matter what we had to say about the war itself, we've always been behind our troops. That's never been a question. They're still over there risking their lives in a country that none of us would even think about setting foot in until they start serving Big Macs at the local falafel stands (it's not that we're scared, it's just that none of us can survive ten minutes without a Big Mac). But how are we - and I'm not talking just us at SA now, I mean all Americans - supposed to feel now? Our troops tortured Iraqi prisoners, including possibly killing one of them. That just doesn't fly. That's not what America does. At least, that's what we've all been brought up to believe. America doesn't do that sort of thing. That's what the bad guys do. But now we've been caught with our collective fly down, and unfortunately we were pissing on hooded Iraqis at the time. Whoopsie.

Just so we're clear, this isn't an "aww shucks" fuck-up we're talking about, here. This is a genuine, bonafide "holy shit" fuck-up. Nobody likes to hear that their prisoners are being stripped naked or urinated on, but it's the sort of thing that the Middle East tends to get particularly uppity about. I don't know what it is about thousands of years of trying to eke out a civilized existence among all those sand dunes and oil fires, but the Arabs as a people seem to consider sexual abuse one of their hot buttons. Check out this quote from Abdel Bari Atwan, the editor of the London-based Al-Arabi newspaper (courtesy of CNN.com):

"It is absolutely shocking. I think this is the end of the story, the straw that broke the camel's back, for America," he told the UK Press Association.

"People will be extremely angry. ... Sexual abuse is the worst thing in that part of the world. It is shocking to all Muslims. America has lost the battle completely. I believe there will be more attacks."

Well, that doesn't sound too good, now does it? Let's review, shall we?

Step 1: Terrorists attack America
Step 2: Bush uses flimsy allegations of hidden caches of weapons of mass destruction and completely baseless links to terrorist attack on America to send us to war with Iraq
Step 3: Iraq loses comically short war and U.S. troops occupy the country
Step 4: Bush realizes he forgot to figure out a plan for rebuilding Iraq after the war, fumbles around while more American soldiers die at the hands of Iraqi guerillas
Step 5: American soldiers get fed up with the situation and take out their frustrations by completely humiliating Iraqi prisoners
Step 6: Terrorists want to attack America 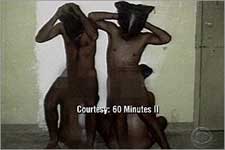 This reminds me of my sixth birthday party, only with nicer hoods.

Tremendous! You know, I feel bad for the soldiers involved. It's got to be hell being over there, waiting for the top brass to come up with some intelligent plan for putting Iraq back together without exposing more Americans to avoidable danger. I can see how they'd want to take out their irritation on some of the Iraqis. I don't condone it, but I understand how it could have happened. What I don't understand is why they fucking photographed it. Did they honestly say, "Hey, you know what would be fun? Let's horribly violate the Geneva Convention and take pictures of it! The guys back home will get a huge kick out of it!" How did it cross no one's mind that the pictures might get out, and that it might, just maybe, end up being a huge international relations fiasco? It would be another thing if these were the troops in charge of watching over Saddam Hussein. No one would make a fuss if the pictures showed troops pissing on Saddam Hussein. At this point, I think the world is willing to grant us that one. But doing it to random Iraqis, the majority of whom were most likely not Saddam Hussein (although the hoods make it hard to tell), was just asking for trouble.

I keep hoping to hear that the pictures were all faked. Some jackass with Photoshop and too much time on his hands wanted to have a little fun. But somehow that doesn't seem likely. The entire abuse scandal was only brought to light when one of the troops reported it to a commanding officer. If you've got soldiers ratting out other soldiers because they can't stay silent about the inhumane treatment of prisoners any longer, chances are they're not talking about serving the prisoners second-rate caviar. The terrorist community is not going to stand for this one. Considering the attacks that have been happening around the world, I'd say they've been just looking for another excuse to target us again. Hey, that gives me an idea! It looks like I'll get to participate in Top Ten Week after all!

10. That filthy half-nude American temptress Britney Spears hasn't done Penthouse yet.
9. Reid "Frolixo" Paskiewicz is getting married, thus breaking the hearts of Al Qaeda leaders everywhere.
8. "Collateral Damage" sucked, and yet Arnold Schwarzenegger gets to be governor of an entire state.
7. The RIAA is suing Osama Bin Laden for $149,000,000 for illegally downloading Alanis Morissette's new album before its release.
6. The whole "bombing the shit out of Afghanistan" thing.
5. American troops keep buying all the good merchandise from Achmed's Black, Featureless Hood Emporium.
4. Zack"Geist Editor" Parsons made fun of their website featuring crudely drawn porn starring the cast of Totally Spies.
3. Principle photography has just begun for "Legally Blonde 3: Blondes Over Baghdad."
2. Terrible human rights violations of Iraqi prisoners at the hands of American soldiers.
1. MTV's Punk'd is somehow returning for another season.

The Weekend Web: Based on the Best-Selling Novel

Hello internet friends, Zachary "Spokker Jones" Gutierrez here again with dumb forums and even dumber comments. This week we've got an official Fox forum full of people officially declared retarded, an anime high school where not all is what it seems, religious nuts fighting with other religious nuts, and Star Wars nerds.

I don't have to make a top ten list so you can all kiss my ass.